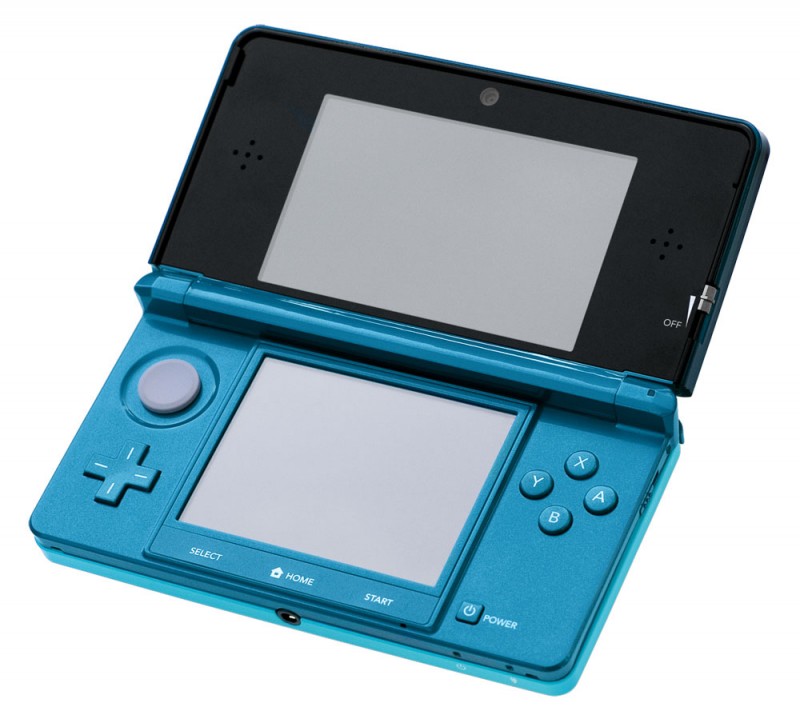 I was not planning on purchasing a 3DS at launch, but a certain game publishing company sent me a review copy of one of their 3DS launch titles and my temptation went over the edge. I can’t say I wasn’t excited though. I welcome any chance to get my hands on new technology and mess around with it. I was mostly interested in seeing how Nintendo could pull off the 3D effect without the glasses, but it turns out there are a lot of other fun little features preloaded onto the system as well.

The system itself looks pretty rad. I have seen both the blue and the black ones and I am happy I bought the blue one.  The 3DS sports everything you would expect in a modern day handheld. It has a volume slider, memory card slot (SD card), a wireless switch, a headphone jack, and of course, a slot to put the games in. The stylus holder is also on top and the collapsible stylus is a nice touch. When you open it up you will immediately notice the addition of an analog stick and the larger top screen. After a closer inspection you will see a camera above the top screen as well as cameras on the outside, a slider bar to control the depth of the 3D and the overall button layout. There are also LED indicator lights everywhere.

While it is a nice system, there are a few minor things I would improve if I had the ability. The 3D slider bar feels cheap because it is a little loose and wiggles around. Due to my larger hands and the fact that I played an original DS for years, the 3DS and its shoulder buttons feel a little too small. I would also be more inclined to take pictures with it if the cameras took clearer pictures. Lastly, the start, select and home buttons on the bottom of the touch screen look like they would be touch activated, but they are actually buttons. They can be a little cumbersome to push because of their general positioning, and I think it would have been cooler if they were touch activated or positioned on the right side over or under the A, B, Y, X buttons. However, these are all very minor complaints and playing the 3DS still comes very naturally to gamers.

In addition to the 3DS handheld itself, the box contained the various manuals explaining how the system and the various pre-installed programs work as well as explaining the various features of the system. The system also came with a set of “AR Cards” which are used for one of the augmented reality games. Of course it also comes with a charging cable that you can either plug into the system itself, or into a convenient little cradle that it comes with. The cradle is great because you can just put the 3DS in there and it will charge without you having to plug and unplug anything.

Taken with the 3D cameras

In terms of functionality, the 3DS plays smoothly based on my experience with it so far. Almost every game has run without a hitch, and some of them have some cool 3D effects. As far as the actual 3D goes, it does not make things seem to jump off the screen. The higher you move the 3D slider the more depth the games seem to have. After I find the right positioning for the system I can usually keep the 3D on full with no problems. The touch screen is also very responsive, although it would have been nice if it was optimized for your fingers rather than a stylus since most other touch screen devices primarily have you use your fingers.

When I turned on my 3DS and got everything set up, I was surprised to see the pre-installed software on the main menu. I didn’t know about any of it prior to the purchase, so it was a nice plus. There are the simple ones such as the camera application that allows you to take pictures and draw on them, the 3DS Sound which lets you record a sound and adjust its speed and pitch, the Mii Maker which is similar to the one on the Wii, and the Activity Log which records what games you play on a graph.

Next there are the augmented reality games. The first one is called AR Games and those use the cards that come with the 3DS. You place the question mark box card down on a flat surface in a well lit area and 3D boxes will pop up. From here you can choose various games like archery or a golf type game. The most impressive one for me is the fishing game where you tilt the 3DS down to cast your line into the water and pull it back when you get a bite. If you adjust your seating or move the 3DS too fast or far away it will hiccup and say that it can’t recognize the card, but it does not interrupt game play. Otherwise it works pretty well and it is an entertaining introduction to the capabilities of the 3DS.

More fun than it should be

There is one more game that comes with the 3DS and it is my favorite. It is called Face Raiders and it is another augmented reality game. You start by taking a picture of your face and then watch as the 3DS morphs it and puts it into what looks like a small helicopter. After that the outside cameras come on and waves of your helicopter faces look like they are coming into your world and you have to shoot them down. The real fun is showing your friends and watching their reactions. I have shown Face Raiders to three people so far and they had no idea what to make of it.

One of the major features the 3DS has is called Street Pass. If two people walk by each other with their 3DS’ in sleep mode and their wireless turn on they will exchange Miis. The next time they turn on their system and go into the Street Pass Mii Plaza they will be greeted with the other person’s Mii. There are a couple simple things you can do in there as well. Every time you meet someone’s Mii you can get a puzzle piece from them to complete a 15 piece puzzle. There is also a goofy little RPG you can play where the Miis that you meet try and save your Mii from ghosts. While these may sound shallow, the whole process sounds like a great idea and it definitely has potential. 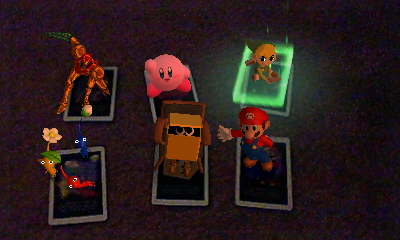 An example of the AR cards and what they do

As far as the online component is concerned, Nintendo has improved it a little. Friend codes still exist, but if you are next to the person you want to friend you can do it locally with no friend codes required. While it is not as open as other systems’ online modes, it is step in the right direction. Unfortunately I do not have any online games to test the actual connection with.

Thankfully Nintendo made the 3DS backwards compatible with the DS. The catch is there are two options in terms of resolution and neither one is optimal. You can start the DS game like normal and have it automatically stretch to the resolution of the 3DS screen, but that makes the game look pixilated. The other option is to hold down start when you open the game and that keeps the game’s original resolution which makes the game smaller on both screens. While you will have to decide which one is the lesser of two evils, the games still play great on the 3DS.

Last, but not least, it is worth mentioning that the 3DS has a 3-5 hour battery life depending on your brightness settings. This is a step down from the DS, but it is expected with the hardware upgrades. Personally, I hardly ever play a handheld for more than 4 hours without charging it, and with the new cradle it is super easy to pop the 3DS in for a charge. For those of you who want a longer battery, there will be options such as Nyko’s Powerpak+ available for you soon.

Overall I can say that the 3DS has potential. The new features like the augmented reality games and Street Pass can evolve into something great, but we will just have to wait and see. My only fear is that my views on the 3DS are the same views I had about the Wii when it was released and that venture did not go so well. Unless you absolutely have to have one of the launch titles I would recommend waiting on buying one and watching to see if these interesting new features will turn into something awesome, or completely flop. Either that, or wait until there is a larger library of games out for it. Fortunately, the 3DS is still readily available in stores and online, so it seems like getting one a little later will be less of a problem than it was with the Wii.

3 thoughts on “What You Should Know About the 3DS”