I’ve had this game since it came out on February 22nd.  Now you might be wondering why it’s taken me such a long time to get a review out.  There are two reasons–firstly, the game, in typical Atlus fashion, was sold out everywhere shortly after its release.  A few weeks after it came out, you’d have been lucky to find the game priced under $50.  Fortunately, a renewed print run (which may or may not include the soundtrack sampler that shipped with the first run units) will ensure that this review is not a waste.  The second reason is because I’ve been pondering several things concerning the game.  After all, it’s no small thing to compare a JRPG to the likes of Chrono Trigger and many other 16-bit masterpieces.  The standard for JRPGs was set back in the 90’s, largely on the Super Nintendo but also on the PlayStation, and since then it’s largely been a constant pursuit of that standard.

So I’ve spent a month playing Radiant Historia, because no comparison to Chrono Trigger can be made lightly.  I’m happy to announce that, after this much time with the game, that it is definitely worthy of that comparison and it is not only the finest RPG on the Nintendo DS, but probably one of the best this generation across all platforms.  I’ll have to put it down and return to it later on to see if it has staying power, and if it does, then I’m confident it’ll sneak its way into my list of favorite JRPGs, right alongside the greats that made us fall in love with the genre in the first place. 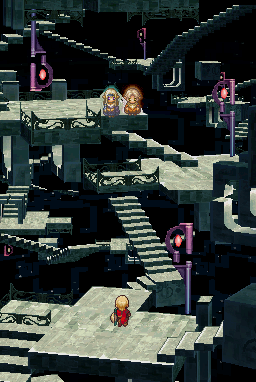 The labyrinthine Historia and the twins that guard it.

Developed internally and published by Atlus, Radiant Historia made things difficult for itself from the start by going so far as to invite comparisons with Chrono Trigger.  It’s a non-linear story focused on time travel, branching plot lines, parallel universes, and alternate realities set in a largely medieval world with anachronistic elements of science/magic, which was also a staple of another great JRPG, Final Fantasy VI.  The game follows Stocke, a skilled young swordsman who begins as a special agent for the kingdom of Alistel, and two mercenaries named Marco and Ranie.  Other characters include Stocke’s former comrade, Rosch, the beautiful Princess Eruca of the enemy nation of Granorg, a young girl named Aht, and a warrior named Gafka.

The plot has all of the necessary elements.  Granorg, presided over by a ruthless queen, has mounted an invasion of Alistel and the player quickly becomes embroiled in events that threaten the world itself.  The key component is a magical book known as “The White Chronicle,” which allows Stocke to enter the magical nexus of Historia and travel freely between waypoints set up along the game’s alternate timelines.  Acting as your guides are the mysterious twins, Teo and Lippti, who tell you that there’s an evil force wielding “The Black Chronicle,” a tome of equal power, and that Stocke is the only one who can correct and preserve time.

Some might think that the classic formula of increasing stakes — the story of a motley crew of adventurers being tasked with the salvation of existence — might be wearing thin, but the deep time travel element injects it with more than enough innovation.  In addition to serving a valuable narrative purpose, the system also allows players to leave the game for extended periods of time and return to it later on.  There’s no chance of forgetting the context of the story seeing as you can return to any node in the time line and play the game through from that point with no penalties to your party status, experience, or equipment. 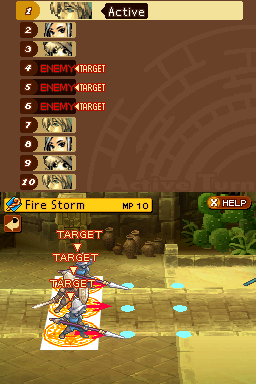 The battle system. The top screen shows the turn order, which can be changed by sacrificing a turn, and the bottom shows an area of effect attack being prepared.

The battle system is equally refreshing.  Combat begins in the field, and players can attack enemies in real time to stun them so as to enter battle with bonuses.  This also eliminates random encounters, so you can avoid fighting almost entirely if the situation calls for it.  Once in the battle screen, you’ll find that all of the participants are arranged in a sequence and that chaining attacks into combos using your entire party leads to greater damage and experience.

Enemies are placed on a 3×3 grid, with some taking up more than 1 block of space.  The goal is to hit enemies into each other so subsequent strikes will damage multiple enemies and the combo counter will increase even more.  Enemies that are in the front row will take more damage from your attacks but cause more damage when they return the blow, whereas hitting enemies into the back row will lessen your damage but prevent them from seriously wounding your party members.  It’s the kind of system that becomes more complex at just the right pace so you never feel overwhelmed by its complexity.  And if you don’t want to bother with strategy and setting up sequences of well thought-out attacks, the auto-attack function is an adequate replacement, especially when revisiting earlier areas with lower level enemies.  The equipment system is robust without requiring too much micro-management, the magic system includes all of the classic elemental, healing, and status spells, and items round out the experience.

The only real flaw of the game is a lack of a mini map or indeed any map at all.  But, then again, Chrono Trigger didn’t have one.  Those who have become accustomed to that modern convenience will endure a bit of a bumpy re-entry into the exploration that Radiant Historia demands from its players, but none of the environments are so convoluted that a map is necessary.  Elder-Geeks will just have to rekindle our powers of memorization to minimize backtracking and needless traveling, and new gamers will get a glimpse into what games used to be.

Graphically, Radiant Historia continues its practice of channeling Chrono Trigger with 2D sprites and backgrounds.  Animation is clean and expressive, but simple compared to some more modern handheld titles, and the art style seen on the cover of the box appears in-game as character portraits.  The music was composed by Square veteran Yoko Shimomura, whose previous works include Super Mario RPG: Legend of the Seven Stars, Parasite Eve, Legend of Mana, and the Kingdom Hearts series.  First print copies of the game came with a soundtrack sampler CD like most Atlus titles, and the entire soundtrack is available for purchase, though fans outside of Japan will be forced to import it for around $40.  The music, like everything else in the game, brings to mind the heyday of JRPG’s and gamers won’t be disappointed.

Going up against titans might seem risky, but Radiant Historia has everything necessary to make an attempt, and it succeeds.  It certainly doesn’t surpass the aforementioned titles, but it’s the single most refreshing JRPG experience I’ve enjoyed in a long time.  As the storyline and game mechanics slowly revealed themselves, I was pulled in and I felt like I was playing one of the 16-bit greats for the first time.  The innovative battle system, the interesting characters, the expertly composed story structure, the comparatively subtle writing, the retro inspired graphics, and the fantastic score all come together to create the finest JRPG that the Nintendo DS has to offer and one of the best RPG’s I’ve experienced this generation.