There have been so many retro-inspired 2D games released recently that it’s becoming hard to even classify them as retro. Pixel graphics are an art form of their own now, be it the style used in a video game or artwork painted by hand on canvas. The truth is, just because pixel graphics represent a certain era doesn’t automatically mean newer works should be hailed as retro inspired. However, Mutant Mudds, from developer Renegade Kid, truly is a retro throwback. Not only in its visual approach, but the actual core design of the game.

This thought struck me when I had died towards the end of one of the first few stages. Death, as it turns out, results in being sent back to the start of the stage without any progress being recorded. I have become so accustomed to check points and half way marks that I was actually thrown off guard when death represented the same punishment from the games of yesterday. Further, it occurred to me that there were zero health pick ups along the way either, it’s just three strikes and you’re out. In a time where developers are trying to rethink the entire concept of what the punishment of losing in a video game should mean, I find that Renegade Kid relying on classic design theory is actually welcomed here.

The core mechanics, jumping and shooting, even have an edge of classic game design behind them. Mutant Mudds would actually feel right at home on a NES control pad considering the fact that it only uses two buttons and the D-Pad to do everything. Jumping is the only action with some depth behind it in that a second press of the button while in air allows main character, Max, the ability to hover for a few brief seconds. This idea is the key behind the entire game, and Mutant Mudds largely succeeds in the way it has been built around this mechanic.

The multi-layered stages, in which Max can jump into the foreground and background, are littered with insane jumps that many times require pixel perfect accuracy to land. There are plenty of bottomless pits, one hit death style spike traps, and fiendishly placed bad guys that all call back to the platformers of the late 80s and early 90s. Like any good platformer, landing and navigating this series of jumps is extremely satisfying.

There are three additional abilities Max unlocks as the game progresses which include granting him longer air time, a more powerful gun, and a rocket jump. Each of these items also act as a key in that they’re required to reach secret levels. The catch is that Max can only hold one of these items at a time and must equip them before entering a stage. While certain players may rely on the extended air time for most of their play to aid the tricky jumping, they’ll need to abandon it in order to access a secret area only the gun has access to. It’s a unique concept, and it encourages players to master Max’s basic abilities and not to rely solely on one item as a crutch. 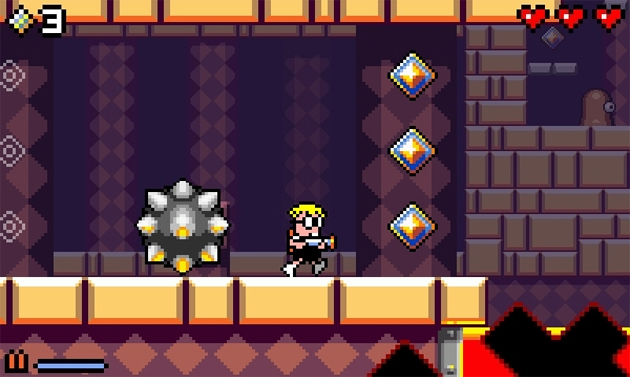 Unfortunately some classic design blunders from the old days also work their way into Mutant Mudds. While the platforming is mostly meticulously crafted, there are a handful of blind jumps, and some questionable enemy placement. Some jumps appear to show that the coast is clear, but the moment Max makes his way over there something might appear out of nowhere and cost Max either his life or a valuable health piece. There is only one enemy in the game that actually shoots anything, and this guy is placed in some rough spots throughout the adventure. This leads to many moments where Max will be casually walking along and get shot at from an enemy off screen. The player shouldn’t be surprised to find themselves firing blindly and praying that the enemy is actually taking damage.

The 3D stereoscopic graphics are a bit of a double edged sword as well. Turned up, the game looks beautiful, but most importantly the layered backgrounds are easy to follow. However with the 3D turned down, the flattened images make it somewhat hard to see what Max can and can’t walk along. In a way, it’s actually an interesting situation in which Mutant Mudds makes a case that 3D graphics actually do benefit certain games, yet the fact that it hurts the experience when they’re off can’t be ignored. There are plenty of people that just can’t see the 3D effect, so while they could certainly still enjoy the game, it may not be without a few hiccups along the way.

The actual pixel art itself is charming, especially the hidden monochrome Gameboy and red Virtual Boy stages, but the art and sound as a whole come off as a hodgepodge of different console generations. Mutant Mudds echos the look of a game from the 16-bit generation, but Max himself looks like he came from the 8-bit generation. It is a jarring design choice that I’m not sure most people would note, but Max looks flat compared to the more detailed scenery and bad guys. Considering the fantastic music emulates that unforgettable Konami chip sound, complete with its one of a kind drum samples from the NES days, I’d have preferred if the game looked more like an 8-bit game than a 16-bit one. It already plays and sounds like a NES game, making me think Renegade Kid should have just went all the way.

Regardless, Mutant Mudds feels like the real retro deal, something that could have certainly existed in the early 90s, blemishes and all. Mutant Mudds might scare off platforming novices, but the player that cut their teeth on this sort of game will find plenty to love.

My total playtime to find everything in the game was 4 hours. This of course will vary depending on the skill of the player. Some stages had me stuck for over 20 minutes, others I completed on my first try.

No final boss or final stage after clearing everything. Ending feels a bit anti-climatic as a result.