The 2D platformer has become a very popular genre in video games recently. Games like Super Meat Boy, Rayman Origins, and Limbo come to mind almost immoderately, but now there is another game throwing itself headfirst into the ocean that is 2D platforming. Scarygirl is the name of that game, and you have to wonder if it has what it takes to not be overshadowed by all of these other titles. 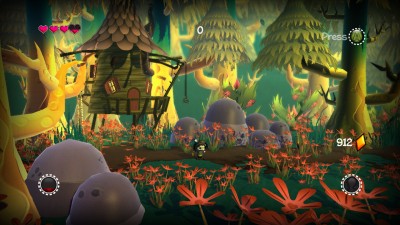 Johnny Depp has to be in here somewhere

Based on a graphic novel by Nathan Jurevicius, Scarygirl puts you in the shoes of, well, Scarygirl in a 2D adventure focused heavily on platforming and combat. From what I gathered during the intro Scarygirl is a half pirate, half zombie and half octopus girl that was abandoned and then adopted by an octopus named Blister. She also frequently has nightmares, and is hell bent on finding out who is causing them. The story gets a little more deep from that point, but overall it is simple and easy to follow, which is good for this genre.

When I watched the intro I was greeted with some great 2D art telling the story of Scarygirl. However, when I  actually started playing the game the look changed to a 3D version of that 2D art which most closely resembles a Tim Burton film. The style was colorful but creepy with plenty of different enemies and varied levels. The game looks great, but after seeing the 2D intro I couldn’t help but wish that the whole game looked like that.

During the game it felt like somebody was reading the graphic novel to me. The voiceover that tells story during cutscenes is a nice touch and it turned out to be the highlight of the sound design. The music went along well with the environments, but it never really stood out. 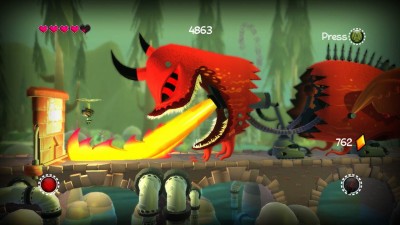 One of the surprisingly few boss fights in the game

Scarygirl can be categorized as one of those combat centered platformers. One of Scarygirl’s arms is a tentacle with a hook on the end of it, and she makes very good use of it throughout the game. Not only does she beat up enemies with it, she uses it to glide through the air like a helicopter, swing between platforms, and throw objects at stunned enemies.

As far as the platforming goes, Scarygirl has everything you would expect. Moving platforms, spikes, grappling points, and underwater levels are all present and accounted for, and they can range from incredibly fun to indiscriminately frustrating. The controls are a little loose, but the lengthy glide time after jumping makes up for it. In fact, sometimes you’re able to skip certain sections of platforms because the glide is so long. Scarygirl hits most of the basics, but it never really tries anything new. 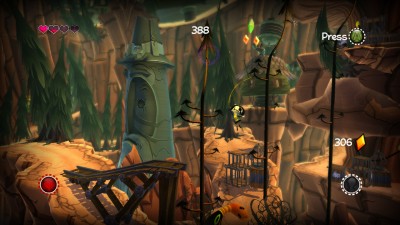 Scrambling for something to swing on

The other chunk of gameplay comes from the combat. Again, it’s a pretty standard light and heavy attack combo driven system. You can use gems you collect to buy new combos and weapons throughout the game, and odds are you’ll find one that works for you and spam it like crazy. Most of the time you will fight enemies in groups and the game encourages you to throw stunned enemies into each other to make your life easier. Unfortunately, enemies are stunned right before you kill them, so the window of opportunity to grab them is very difficult to judge. I rarely threw enemies because more often than not it would end up with me getting hurt—which could have been avoided if I just attacked. There’s also a rage meter which can be very helpful. When it fills up, Scarygirl lives up to her name and transforms into a monster, making her attacks infinitely stronger.

Like the platforming, the combat can be very taxing at times. Certain sections will try your patience as you retry them again and again. Fortunately, you have a shield similar to the kind in Super Smash Bros. that can even deflect projectiles back at enemies if you time it right. While this is a useful tactic, most of the time you’ll have enemies swarming you with one or two jerks in the back throwing stuff making the maneuver difficult and sometimes taxing. In the end, the combat mostly boils down to using your best combos over and over.

I was excited when I saw that there was co-op for Scarygirl. The second player controls a martial arts rabbit that teaches Scarygirl her moves early on in the game. I quickly realized that the co-op was pretty bare-bones, with the second player not really making any kind of impact other than attacking some enemies here and there. The rabbit gets teleported to Scarygirl whenever he goes off camera, and if Scarygirl dies you restart at the checkpoint even if the Rabbit can still go on. The co-op is only local, but that’s okay because the second player will probably just get bored after a few minutes and drop out of the game anyway.

Scarygirl plays it safe in just about every way, with the only unique thing being the source material. With the flood of 2D platformers already on the market, it’s difficult to recommend spending $15 on this title before trying it out first. Fans of the graphic novel will no doubt enjoy the game, but everyone else should give the demo a swing before investing in the full product.

One thought on “Scarygirl Review”