Kingdoms of Amalur: Reckoning slid down the trough to greet savage RPG fans that have been salivating for more and more RPG goodness after being excited by 2011’s offerings to the genre. Assembled by what can only be called a dream team of artists, Amalur was looking to raise the standards bar a little higher as it promised to be a marriage of The Elder Scrolls IV: Oblivion and God of War. But anyone who has ever been to a fast food restaurant knows, what you see on the menu isn’t always what you get.

You start your Amalur adventure dead at the bottom of the Well of Souls. You resurrect among the corpses of hundreds of failed experiments and you begin to unweave Amalur’s story and your fate. 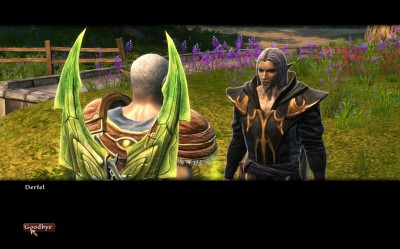 The quests and quest structures are familiar to anyone who has played an MMO.

The game offers five separate regions, four different races, three class trees and a slathering of abilities per class tree. Upon leveling up, players can mix and match their experience points, creating their own custom classes that the game refers to as “destinies.”   (Correction: It is possible to create a female character in Kingdoms of Amalur: Reckoning. Elder-Geek.com apologizes for the error.)

Once you’re let loose into the world, it’s up to you to decide how you want to play Amalur. You can tackle the main storyline or you can take on some of the hundreds of side quests. While the entire world is open to you, each region is zoned like an MMO with different level monsters existing in each region. You are free to explore where you want, but in all likelihood, the story and your skill level will determine your haunting and hunting grounds. Aside from wanting to complete some missed side quests, you won’t be doing much backtracking across older zones. 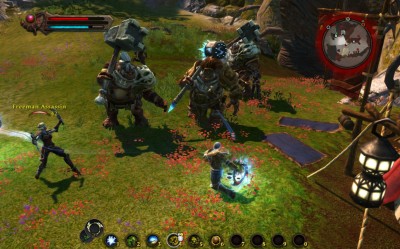 The combat can be God of War-ish, but it quickly turns into a clickfest.

Set in a 3rd person point of view, the combat is one of the game’s selling points as it promises to seamlessly mend together melee combat with magic. For the most part, it does it well. Using the chakras feel like the Blades of Chaos from God of War. And if you’re more of a fan of magic, or board and sword combinations, you’re free to explore that route as well. However, ranged combat with bow is pretty boring with the auto-lock system. It is a click-fest, so know what you’re getting into before you take the plunge. Some don’t mind while others may want something more substantial. No matter how you take it, the occasional quick time events don’t do the game’s combat any favors.

There are skills you can practice like alchemy, blacksmithing, and lockpicking meant to enhance your RPG experience. They are all functional, but none of them bring anything new or exciting to the table and we wish they were all refined a little further.

Graphically, Reckoning is behind the times. Stylistically, it is very similar to World of Warcraft which would be acceptable for an MMO, but for a single-player experience, we expect something more dynamic. By today’s standards the environments are bland and uninspired. With the absence of an auto-run feature, you’ll be taking in the monotonous landscape one step at a time. The limited armor and enemy types don’t help much either. You will be battling more than your fair share of wolves, spiders, humans and trolls across all regions of the map.

The music, on the other hand, is fantastic. Grant Kirkhope has outdone himself. 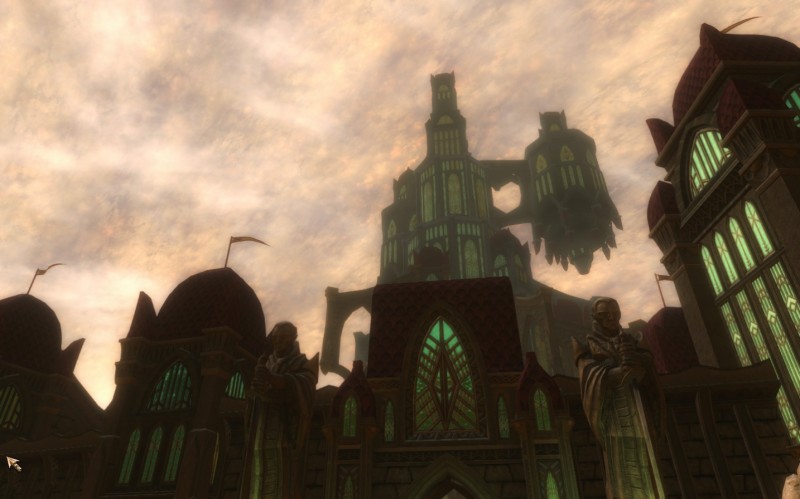 The environments in Amalur leave a lot to be desired.

Reckoning is an experience that doesn’t rely enough on the skills of its artists. It’s hard to see the influence of Todd McFarlane anywhere in its world. As life-long fans of his work, it’s a shame to see his influence buried in the mediocrity. The story and characters are completely forgettable. And the game world is bland for the genre, and reminiscent of decade’s old MMORPGs. The combat doesn’t begin to get exciting until you find or craft some decent material about 10 hours into the game. From there, the combat will hold your attention until you’ve wrapped up your time in Amalur.

While the game doesn’t fall flat on its face with bugs and glitches, it’s still definitely playable. Fans of the genre may enjoy it, but don’t expect a D&D type adventure before you begin. Curious action adventure fans may find something to love here. All in all, it feels as though Amalur tries to blend the styles of Diablo, World of Warcraft, and Fable 2 into one game, but doesn’t achieve the greatness of any of them. It simply plays it too safe and the end product feels, for lack of a better word, generic. An online co-operative campaign would have done this game wonders.

Fans of WoW might be most comfortable with Amalur as it can be best described as an “offline-MMO.” We can’t recommend anyone rushing out and purchasing it as full price especially since 2011 was full of great RPGs. This is definitely a look before you leap scenario. For console gamers, this worth a rental. For PC players, check out the demo or wait for it to go on sale.