League of Legends has been around since late 2009, and more and more of us here at Elder-Geek have finally dipped our toes in its waters. Given this, we thought it was high time we gave League of Legends a review; so, here goes.

League of Legends was developed by Riot Games, a studio founded by creators and contributors of the original Warcraft 3 custom maps; Defense of the Ancients (DotA). League of Legends follows the same formula, all be it with layers added both on top, and beneath.

League of Legends follows the classic DotA formula, with three pathways (or lanes) with a team base at each end, and defensive turrets belonging to the respective teams. Waves of monsters spawn at each team’s base, breaking off into smaller groups and marching down each lane. The non-controlled monsters from each team will battle it out for eternity until the intervention of a player champion, pushes the odds in one team’s favor.

As a game progresses player champions gain experience and gold by defeating enemy monsters and champions. When one side inevitably gets sufficient control of a lane, they push on towards the first turret.

This continues until all turrets, and finally the main base of the enemy team, is destroyed. With each turret being progressively stronger than the last, it eventually becomes necessary for the whole team to coordinate and attack as a group.

Adding another layer to this cake is the item system. As you earn gold you’ll want to purchase items that boost stats and awards special abilities. You can’t just purchase any item, however, as some items are better for some champions, and some are downright useless. Knowing which items to buy and when to buy them is extremely important.

The game provides a list of recommended items. More often than not, however, these will not be ideal. The only way to find the right mix of items for you is to experiment through trial and error. A calculator comes in handy as well. There are plenty of online guides available, but these don’t take into account individual play-style. Experimentation is key.

It’s a brilliant formula that makes for some of the most hectic and fun team play we’ve ever experienced. At first glance it can seem like the first 10 minutes determine the remaining 50, but any team with good coordination and a strong defense can turn the odds in their favor. League of Legends is a game of skill, but the balance isn’t perfect, with some of the champions having clear advantages over others.

Riot has included two extra modes, one called Twisted Treeline where instead of three lanes there are only two, and instead of five players on each team there are only three. It makes for an interesting change of pace, but it’s little more than a distraction compared to the regular mode, Summener’s Rift, where all the real action resides.

Dominion is the equivalent to domination mode found in most modern first person shooters. The map has one circular lane with five control points scattered across it. The team that holds three or more control points slowly chips away at the enemy team’s tickets. Once one of the teams reach zero tickets, the match is over. In Dominion, champion and minion kills aren’t as important, as every team member earns experience at an even pace. Winning isn’t about having the strongest players, but rather, holding the most control points.

Sadly the community’s patience for new members is, for the most part, nonexistent. While learning to play the game, be prepared to hear derogatory comments left and right. The use of the “r” word is, for example, more frequent in this game than such classics as “is, a, the, and it”. Perhaps most annoyingly, be prepared to be blamed for other’s mistakes by those not big enough to admit their own wrongdoing, innocent as it may be.

The game is, in principal, free to play. Each week 10 random champions are made available for free. However, if you want to play your favorite champions every week, you’ll have to purchase them using either Influence Points (IP), or Riot Points (RP).

You earn IP through playing the game, but the rate at which you earn these points is painfully slow and the points are better spent towards the purchase of Runes; stat boosters that can only be purchased with IP. RP on the other hand are easy to obtain, provided you have a credit card and some disposable income. If you take a liking to the game, you’ll more than likely end up spending upwards to 200 bucks on the game. Otherwise known as four brand new games.

To some, however, it’ll totally be worth it. The excitement from Jungleing a Trundle– popping in and out of lanes to scare the bejezus out of the enemy team–is unmatched. Or playing a tanky Maokai; making his team near invulnerable with Vengeful Maelstrom while dealing massive damage to top it all off. Or Urgot; with is ridiculous range and massive attack damage, sniping people who thought they were safe and sound behind a turret. The list goes on and on. 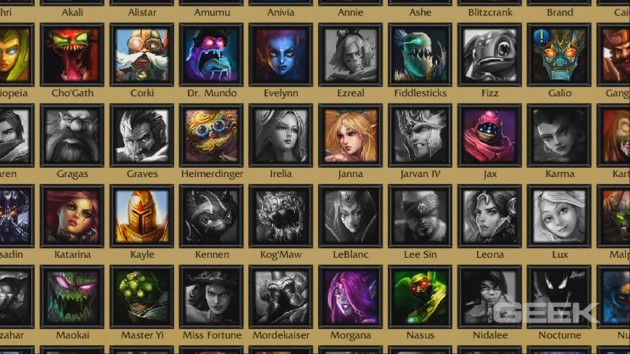 Just some of the over 90 champions available in the game.

There is a magnitude of details we aren’t able to cover in this review, which demonstrates the incredible amount of depth Riot has managed to put into a fairly simple concept. Singing the praises of this game could hardly be easier. Sure we wish the micropayments were cheaper, and that the learning curve wasn’t so steep, but those are minor details when measured against the amount of pure fun you’ll get out of this game, provided you sufficiently engross yourself in it. The only significant thing wrong with League of Legends is the people playing it, but we can’t really blame the game for creating such a passionate fanbase, for better or worse. Given that the game is free, we definitely recommend trying it out. It’ll be up to you if you want to spend money on it or not. We certainly have.