In the vast sea of PS Vita games it’s difficult to single out one that is the must buy, perfect launch title that will last you on into the future of the powerful system’s life. Don’t worry though, I am confident in saying that we at Elder Geek are here to make that decision for you.

That’s right, the trip-hop, psychedelic block puzzler is the most addicting game available on your shiny new synth-station. I mean, let’s be honest, everyone loves Lumines and if you don’t love Lumines you either haven’t played enough of it or you don’t believe in geometric pairings or colors due to religion or blindness. So you’re a dog. Congratulations, fun-hating dog.

For those of you unfamiliar with the Lumines series, it’s a techno-tetris game in which you have to create sets of squares from smaller, bi-colored squares as a tempo line works its way across the stage to destroy your completed blocks. If that sounds too crazy don’t worry, once you get started it begins to make much more sense. 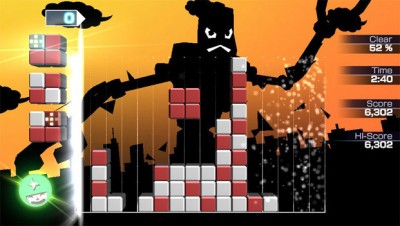 For the most part, Q Entertainment has kept the formula the same. They’ve created a slew of new dynamic backgrounds and loaded up 34 new block-droppin’ beats from artists like The Chemical Brothers, LCD Soundsystems, and Aphex Twin (which features Windowlicker, one of my all time favorite songs and the best music video ever). Overall, the soundtrack is phenomenal and when paired up with the Vita’s ultra detailed display can lead you on an acid trip of music drunkeness and kaleidoscopic eyegasms. Even the small sounds emitted when rotating and dropping blocks flows seamlessly into the electronic orchestra that explodes from Lumines, and it all creates a trance-like zen state that you’ll welcome all too often. There’s nothing like picking the beat up with a x3 bonus after a rough patch.

A few huge improvements have been made to this newest entry. For instance, now when you’re attempting Electronic Symphony’s lengthy Voyage mode and lose you’re not forced to start back at the low tempo first song. You now have the option to simply Retry from the last song you played, which makes initially unlocking all the songs and maps much easier. Once you have yourself a collection of tunes, you can go to the Playlist mode and create a match of your favorites. It’s a really simple addition, but it’s one that’s greatly welcomed.

Lumines also ramps up the usefulness of the abstract avatars that have been prevalent throughout the series. Now, these little creatures can lend you powers with the tap of a finger. Whether it’s providing you a much needed Chain Block to remove a section of one-color squares or stopping the tempo line for a second, the added strategy opens up tons of possibilities during play. Speaking of power-ups, another new addition is the Shuffle Block which randomly swaps colors of all the blocks on the screen. This can be make or break during some sections as it could give you 5 full squares or completely ruin your old ones. Out of the new stuff Q has given us, it might be the only unwelcome change. Still, there’s a sick gambling joy that comes with the risk.

You’re progress can now also be logged into the World Block, a giant monstrosity that begs to be deleted. By playing the game and eradicating squares you can help the community get rid of the awful World Block which will net you some extra experience to unlock new avatars and skins. It isn’t much, but it does give you a nice sense of satisfaction to see it disappear. 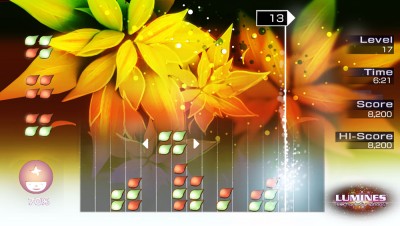 Lumines is beautiful on the Vita screen.

What Lumines really does well is integrate your friends list. The game keeps you updated on the high scores of everyone you know who owns the game, and when you’re playing a game where a bigger score is the main motivation, the competitiveness is hugely welcome. There’s also a competitive multi-player mode if that’s your thing, but after a few games I felt the super fast beat-hopping  just didn’t translate that way. More often than not, VS matches were decided within the first few seconds of play.

As a fun, pick up and play puzzle game for your Vita Lumines scores big in re-playability. Oddly enough, its biggest strengths are in that it doesn’t utilize a lot of the Vita’s more “innovative” features. No gyroscopes or cameras are used and even the touch screen is relegated to only summoning your avatar’s powers. But while the game ups the tempo in all the right places, it also can sometimes drop the beat. At it’s core Lumines is still Lumines. People who can’t sustain their longing for puzzles and swanky beats may get bored of the gameplay after a while. The rules during your first hour of play are exactly the same as the rules during your hundredth, and the games extra modes of Stopwatch, a time attack, and Master, an ultra hard mode, don’t offer too much out of the ordinary. Regardless, whether your looking for a short diversion or for a lengthy time sink, Lumines remains one the best launch games for the Vita and is the perfect downloadable title for your new system.

One thought on “Lumines Electronic Symphony”