I oddly took it upon myself to play a non-violent run of The Elder Scrolls V: Skyrim. What possessed me, I do not know.

But my personal goal was to complete as many missions as possible without killing a soul. I’d get by with my sneaking, smooth talking, and good old fashioned conscientious objection to conflict.

Some missions I could immediately write off as impossible. Doing anything from the Dark Brotherhood dirtied my hands and my digital soul too much. The Companions spilled their fair share of blood as well. So, before I even began, I knew my second life would have to intertwine for a while with the Thieves Guild. Pickpocketing and looting homes was a great way to earn cash for potions and gear. 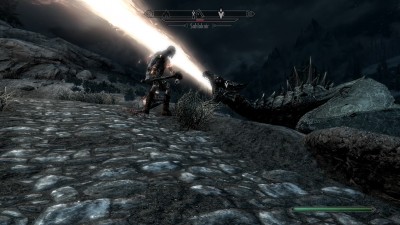 This little walkthrough will spoil the main quest line to stop Alduin. So if you’ve never finished the game before and you want to keep the story spoiler-free, you should probably turn off this video right now and go watch another one of our videos… like the Get Off My Lawn about GTA IV, or even the video about how to properly clean your NES cartridges. They’re both good. Trust me.

The main questline was surprisingly easier than I thought it would be. As long as I’d stay out of sight and I kept my hands to myself, getting out of Helgen just meant letting the Imperials and the Storm Cloaks kill each other.

Getting the stone tablet from Bleak Falls Barrow took some nimble feet as I skittered by the giant spider and let the draugers kill themselves in one of the dungeon’s many booby-traps.

Downing dragons was easier than expected. Even on Expert difficulty, the local guards, farmers, bears and giants were more than happy to kill my dragons for me. Occasionally, a blood dragon would kill everything and everyone in a radius around me, and I’d have to lure them INSIDE one of the major cities like Windhelm or Whiterun.

From there, it was all about having a high sneak skill, some great pickpocketing to disarm (and sometimes disrobe) potential enemies, and a high illusion skill to calm my pursuers or to occasionally make myself disappear.

My first forced combat experience was against Alduin himself just after I had learned the Dragonrend shout. The battle itself was hard as hell without any combat skills, but I mananged to whittle him down with an enchanted glass bow and a heavy quiver of very expensive arrows.

But, that encounter does not kill Alduin, so my kill count remained at 0. 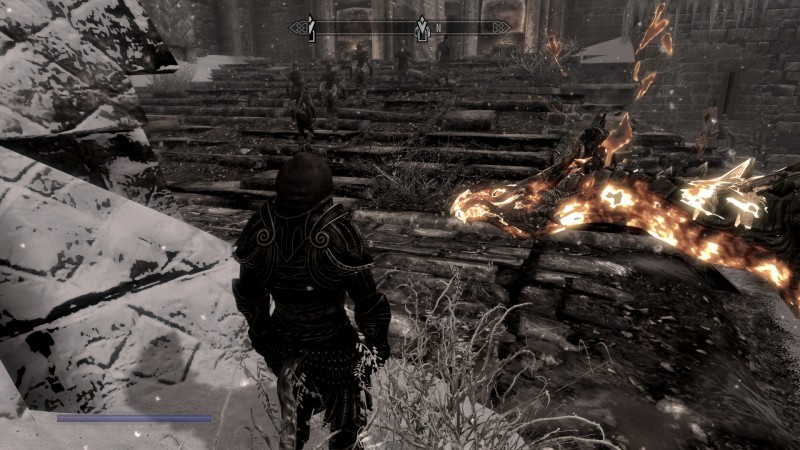 I didn’t think dragons could get into the walled cities. I was wrong.

Afterwards, I was able to sit down, and create peace between the Imperials and the Stormcloaks through the help of the Greybeards. My high persuasion skill which I had built up by intentionally getting caught by the town guards while pickpocketing and smooth talking my way out through my Thieves Guild connections made that incredibly easy.

Finally I sneaked and calm-spelled my way to Skuldafn Temple where I had to make my first of two kills; an undead kill. The Dragon Deathlord holding the key to the entrance to Soverngard could not be tricked into any lethal traps. And once again, I had to dip into my large and expensive supply of arrows.

I worked my way to the final conflict with Alduin. Sat back and watched as the ancient nord heroes made quick work of him as I healed myself with a cocktail of restoration spells and the occasional dragonrend shout to bring Alduin back to the ground.

That’s when the game freezes. As Alduin’s health is at 0, he does not fight back, and the heroes don’t press on their offensive. You’re forced to deliver the final blow. And that’s when I scored my first and only creature kill.

So in the end, I wrapped up my playthrough at level 34. I was a master illusionist, a master pickpocket thief with very high skill in persuasion. I managed to have only 2 kills under Monsignor Kittyface’s belt; a tragedy that no doubt has left him with emotional scars that are not likely to heal anytime soon.

Oh, and I left most of the town of Whiterun existing in only their underwear.