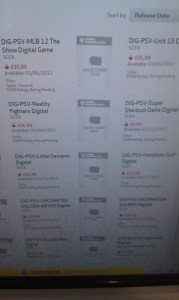 A digital discount for Playstation Vita games has been rumored for a while now, but a recent report of Best Buy receiving demo shipments of the handheld seems to have added a new-found validity to the speculation. A NeoGAF user recently got their hands on one of the units, coming away with a screen grab of a PS Vita pre-order list for the store (above). From said listing, it looks like the digital versions of Vita games will indeed come with at least a few dollars in savings.

Averaging out to around a 10% discount, AAA games like Uncharted: Golden Abyss are marked to $45 from $50, with $40 games like MLB 12 selling for $37, and games in the $30 range (like Little Deviants) offered at $27. A Sony spokesman has since informed 1UP that an announcement is planned “in the very near future” regarding Vita price differentials.