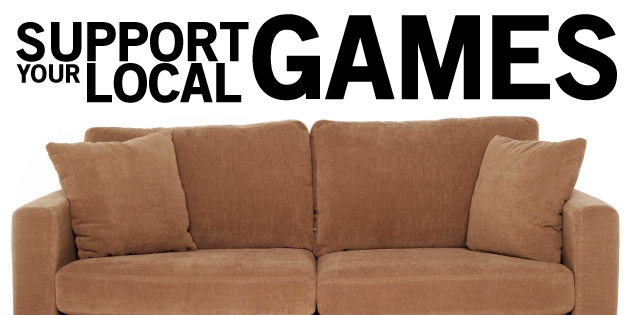 Believe it or not, kids, there was a time without the Internet. A time where we learned about the birds and the bees instead of the two girls and their one cup. And while I could talk about the Internet as a jarring sexual introduction to children, I’d rather talk about something dramatically less important. Couches.

Well, not so much couches as people sitting on couches. Preferably groups of people playing video games. It was while recently playing Rayman Origins that I had an epiphany. I was high-fiving the guy next to me after narrowly completing a difficult time trial when someone else sent me a Battlefield 3 invite, and as I looked at the virtual RSVP with a complete lack of interest it dawned on me. At some point someone took our friends off the couch and put them online, and that’s not okay. The industry has turned its back on one of the greatest features of gaming: social interaction.

Basically the industry did this.

A generation is growing up without knowing the joys of couch co-op. Since when did “sitting in the same room with your friends” become only a feature on the Wii? The lack of social play is a detriment to all parties involved, and while I completely understand the desire to play with a faraway friend, I fear the effect on all of us is too high a price to pay.

Anonymity breeds vulgarity and dishonesty. It’s a sad fact of life, and it’s bleeding into our virtual worlds. Without a friendly face to look into we lose all inhibitions. The sheer vastness of profanity in online matches is mind-boggling, and from prepubescent mouths no less! A woman, a black man, a jew, or a homosexual should never have to sit through the spew that emanates from the untamed anonymous’s mouth. 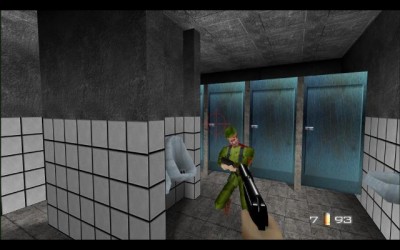 The pinnacle of 90’s multiplayer!

Don’t get me wrong. I definitely condone insults and slander. I just want it done to my face. It’s more clever that way and usually less hurtful. Goldeneye for the N64 practically built the foundation for modern day multiplayer, and many people register it as one of the greatest experiences of their childhood. Was it because the game was great? Nope. By any standard Goldeneye played poorly and was only moderately well designed. What makes the game memorable is having all your friends in one room. It’s slapping someones back on a clutch win or chastising someone for picking Oddjob. It’s the group that made those memories.

We used to have a thing called LAN parties. Places where beer flowed like water and Hot Pockets flowed like beer. There was a crude joy that came with dragging several PCs and monitors or consoles  and TVs to a house and making an event of multiplayer games like Halo and Warcraft. It’s a shame to think LANs are a thing of the past, replaced with staticky headsets and dimly lit rooms. Now we have to go home to play with our friends–explain that to me.

Most damning is the effect a couchless world has inflicted on multiplay itself. You see, anonymous gaming has a terrible effect on our games and our psyche. Let me paint a picture for you:

I have three friends and we play games together. Obviously, I’m the best and my friends know that. In fact, we have constructed a hierarchical system in which my mates practice and adapt to my style in order to topple me from my throne. I am the benchmark everyone must rise to. In this competition, everyone gets better until one of them takes the top spot from me. Now he is the best and we all change in order to beat him.

Realistic goals are what keep you grounded.

This is something that has gone on forever. Groups of friends compete with each other to impress and dominate. It’s the reason I still play Super Smash Bros. Melee and Street Fighter II. I want to beat the guys who sit next to me and talk shit, i.e the person who in my world is the best. But with the takeover of online games with no local option the formula has taken a hazardous turn.

Now we have an infrastructure where there can be no “best”. With infinite players comes infinite playstyles and infinite variables. It’s like running a race with no finish line. This leads to one of two things happening:

Scenario One: You become an asshole. You play day and night, learning every trick and exploit until you’re not so much playing a game, but implementing a routine. You get insanely frustrated when others perform at lower standards and take joy in not outplaying your faceless opponent, but outwitting the game itself. You may become less focused on skill and more focused on exploits, glitches, and bugs. Without an identity you get no human connection and become an AI with the difficulty cranked to max.

Scenario Two: You simply cannot compete with the hardcore players willing to spend all their time striving to be the impossible best. You play as much as you can, hoping not to fall into a match against somebody who is so well versed that you don’t stand a chance. This continues until you either move on or become so strict on limiting the things that prevent you from winning that you sap the fun from the game. That, or you focus on griefing players to restore some imaginary lost honor. Basically, you become an asshole.

Here’s a flowchart for reference.

In both scenarios the result is the same. The game is boiled down to those willing to learn to beat it or how to limit the game so it can be beaten. It’s an endless cycle of improvement among all participants without a benchmark. The aforementioned hierarchy breaks down limiting the lifespan of the game to mere months. Most of all, it creates an unhealthy obsession of competition without any real competing. Without identities to compete against, what are you playing against? Neither experience will live on with you like fond memories of Twisted Metal 2 or the even original Halo.

There are plenty more reasons why Couch Co-Op needs to make a comeback. I love playing games with my significant other, but I’m not going to buy a second system for Uncharted and I really don’t want any part of Carnival Games. That’s why we played Monster Madness, a terrible Gauntlet clone, and loved every second of it. Sure, it’s an awful game, but in a group it’s incredibly redeemable. I remember games like Castle Crashers more than DC Universe Online. We can’t hope to incorporate non-gamers in our pasttime if part of it relies on alienating yourself from social activity.

The Internet is a supplement, not a feature. It pains me to see games like Bioshock get online multiplayer funneled in, and the strange need to shove everything online is madness. Am I wrong in assuming it’s cheaper to create local play over network play? At least then you don’t have to worry about server upkeep. Developers are getting more pressure to incorporate online where it isn’t needed.

Some games have tried. Resident Evil 5, Gears of War, and Borderlands all had good local play. Although, I still have a dark fear that my nearby friend might slowly disappear. I know my fondest memories are of me and my friends playing Super Mario 3 (it counts) and Teenage Mutant Ninja Turtles together and I shutter to think others may not grow up with similar nostalgia. That’s why I implore our readers to support games that make local play a priority. Support games like Rayman Origins. Support games that make friends a priority.

7 thoughts on “Support Your Local Games”