Originally released as a free Source Engine mod, Dear Esther is an indie game with quite a history behind it.  With the help of their dedicated fans, the developers at thechineseroom were able to take their title from a cult hit to a full retail release.  But with the graphical facelift and other updates, does Dear Esther have what it takes to make a memorable experience?

The gameplay in Dear Esther is non-traditional. There are no enemies to fight, no puzzles to solve, and there is little interaction save for walking and looking around.  And we should emphasize the ‘walking’ bit – your character moves with all the urgency of an undertaker.  It certainly took us a few minutes to adjust to the slow pace of the game, but Dear Esther is not an adventure you will remember for its action.

The charm of Dear Esther lies in its surreal setting and subtle, open-ended plot.  The Scottish island on which the game takes place is like something out of a dream with its overgrown paths, ruined buildings, and stunningly beautiful caves.  As you explore the desolate landscape, the narrator, presumably your character, relates the history of the island as well as his motivations for exploring it.  As the game progresses, the island’s past becomes hopelessly entwined with that of the narrator.  It’s unclear whether the events he relates draw more from his own experience or the historical documents from which he supposedly is reading.

Not to spoil the story, but as you explore the island it becomes clear that Dear Esther operates on more than one level.  The island could be a real place to which the narrator has retreated to find solitude and redemption, or it could be the embodiment of a fevered dream.  Dear Esther never tips its hand one way or the other: while certain audio clips are selected on every playthrough, some of them are chosen randomly to present different bits of exposition.  Thus, every playthrough may result in a slightly different interpretation.

Story aside, Dear Esther is essentially a guided tour of the unnamed island.  The only motivation to progress is to see more of the game’s stunningly detailed landscapes and reveal more of its story.  And while it is quite short – our first playthrough took about an hour and a half – each mark on the wall and scrap of paper on the ground seems to hold some relevance to the plot.  As we uncovered more of the story, we canvassed every inch of the island looking for any hints which might fill in the gaps.  And those clues weren’t all we found: sometimes we were quick enough to spot figures far off in the distance.  These phantoms played well with the game’s dark ambiance and the increasingly desperate ravings of the narrator to create a haunting atmosphere. 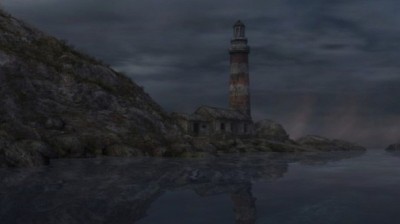 Derelict, but not necessarily abandoned…

Aside from its length, the only real gripe we have with Dear Esther is its use of water as an invisible boundary.  It is horrifying to submerge in the water surrounding the island: as you swim around blindly, a voice calls to you to “come back”.  Linger too long in these waters and your character is sent back to the shore.  We did encounter a bug where our character was locked in place upon being sent back ashore, but it seems to have been a one-off occurrence.  There’s also the issue of your character bobbing up and down like a buoy upon leaving the water, which disrupts immersion.

You might say Dear Esther blurs the line between ‘game’ and ‘interactive film’.  We’re not here to make the distinction (and in fact we’re not even sure how we would make such a distinction).  What we can say is that Dear Esther absolutely enthralled us from start to finish.  Once we became invested in the story, it was impossible not to see it through to its shocking and awe-inspiring conclusion.  Two hours of gameplay for what is currently priced at $10 may not seem like a bargain, but we certainly don’t regret the purchase