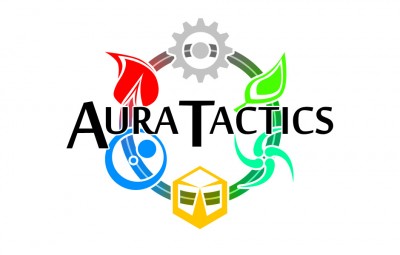 The Strategy/Tactical RPG has been a bit of a beleaguered mess this generation. Outside of a few notable handheld entrants into the genre, the line between turn based combat and character-driven narrative hasn’t been one many studios are willing to balance on. Aura Tactics is looking to use the mobile/web platforms and asynchronous multiplayer to bridge the genre gaps. With its Kickstarter campaign already more than half funded, lead designer Douglas Miller took some time off with Elder Geek to explain how he hopes to get players swapping field positions and character classes on the go.

EG: What is Aura Tactics? Describe the project.

DM: Aura Tactics is an indie developed tactics RPG for mobile and web. It’s in the same vein as Disgaea or Final Fantasy Tactics. Aura features a few unique mechanics though, namely the ability to swap character classes between characters, as opposed to swapping between classes on a single character. Aura will also feature cross-platform asynchronous multiplayer. Meaning you can move between platforms, and play your friends as you would a game like Words With Friends, or chess by mail.

Question 2: Is this your team’s first project? From what backgrounds do your chief designers come from?

DM: It’s our first project working together, and it’s our programmer’s first game development project, ever. He’s actually employed full time programming [other], well, boring stuff. So he’s living cushy while the rest of us are fueled primarily by ramen. Either way though, we’re all working on this on our free time, it’s not a full time job for anyone. Personally I’ve worked on a few projects, mostly projects in school, mods, things like that. 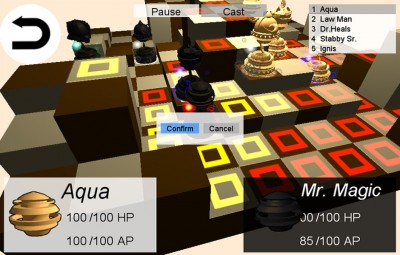 EG: What drew you to start production on a tactical RPG, a genre not often seen in the current generation?

DM: Funny you should ask that, it wasn’t originally my idea. A friend of mine came to me, a programmer, and told me “Hey, I have all this code for a tactics RPG, we should make one.” He had worked on one for a production class in college, but those projects are maybe three months long, and he didn’t really like the designer he had worked with, so he was unsatisfied with what they created. As it stands now, maybe a dozen lines of code are left over from that project, some really basic stuff on generating our playing tiles from our environment meshes. And that programmer is only doing minor networking stuff for us.

DM: Well, Final Fantasy Tactics is definitely a big inspiration for me, it was the first tactics RPG I had ever played, and it’s widely considered the magnum opus of the genre. If Aura has even a fraction of the brilliance from that game, I’ll be satisfied. Other games like Tactics Ogre and Disgaea are obviously inspiration as well, it’s actually a very insular, niche genre. But unlike vertical-shooters or 2D platformers, there’s not a lot of indie devs working on TRPGs.

As for general inspiration, that’s a difficult question actually. I play a lot of games. I talk to a lot of developers who [say] they barely play games anymore – even indie developers – and I can respect the level of devotion and single-mindedness they have to their work, but I think the more sources of inspiration you have to draw from, the more interesting and unique ideas you’ll develop in your own work. Aha, I didn’t really answer the question, did I?

EG: Was the mobile platform your first choice for development? What in particular about phone gaming motivated the decision?

DM: Yes, we knew we wanted to work on mobile from the get go. There’s actually a number of reasons why, but the primary reason is that we felt the game could benefit from the platform. We didn’t really set out to make something that’s going to turn a huge profit, Aura was a project we wanted to work on in our spare time, for fun. That said, there’s a surprisingly low number of TRPGs for mobile devices, and none of them really play to mobile gaming’s strengths; call it a happy accident.

The asynchronous multiplayer and the pace of gameplay; where you spend a long time thinking about what action you want to take [before] directing it, instead of having to quickly react; it’s a perfect fit for mobile devices. We just have to make sure the interface is responsive and easy to use on a mobile device, which right now it’s not, but we’re aware. The UI is going to undergo a gigantic overhaul in the near future.

EG: You mentioned briefly a unique take on character class, can you elaborate on that?

DM: Class swapping is what makes Aura unique in its genre and it’s something we’re really excited about, we want to see how players are going to use it. Normally in a TRPG, classes are handled one of two ways. Either a character is permanently assigned a class, or they can swap between classes they’ve unlocked, leveling them up. In Aura, classes are actually their own unique entities, think of them as equipment: they level up, and you can move them freely between your characters, even during combat.

So let’s say you have an Elementalist getting beaten up by a melee enemy, and up on a cliff above the action you’ve got a warrior just 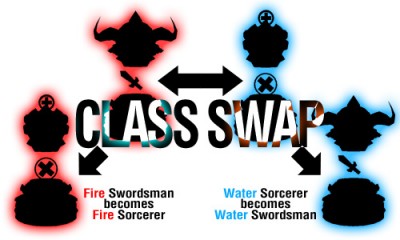 picking his nose, because he doesn’t have any ranged attacks. You can have your characters swap classes, and then the guy down below is suddenly a Warrior with heavy armor, and the guy up top is an Elementalist with ranged attacks. The fun of a TRPG is coming up with crazy strategies to defeat your opponent, so when you mix this with multi-classing and our elemental system…well…like I said I’m excited to see what people do with it! Aside from the obvious impact the system has on strategy in battle, it makes leveling up classes a slightly less tiresome affair, which I think hardcore and casual players can appreciate. You don’t have to level up every class on every character to try out different multi-classing options, you only need to level however many of a class you want in one single battle at a time.

And even though skills are unlocked on the class, characters still level up and gain stats inherent to themselves. Each character has a different elemental alignment, which alters the types of abilities each class activates, and the stats they gain are affected by that alignment, and whichever class they have equipped when they level up. So there’s still a lot of individual identity for each character.

EG: Why go the asynchronous multiplayer route for a tactical RPG? Was it a design choice made due to platform limitations, or is it a concept planned from the beginning?

DM: Tactics RPGs are inherently asynchronous, in the sense that you take a turn, then your opponent does, and you’re not taking turns at the same time (well other than Vandal Hearts, but you get my point). When you look at it, the fact that it’s already turn based [and] on a grid, it’s basically chess+, and people have been playing chess by mail for a long time. So, it’s sort of the grandfather of asynchronous play, and it fits nicely.

One thing to keep in mind is that, if you really want to play a game with your friend who’s in the same room as you, right then and there, there’s nothing stopping you from taking turns back to back without ever locking your phones. And it also works nicely with cross-platform, so you can switch to your PC when you’re playing at home. 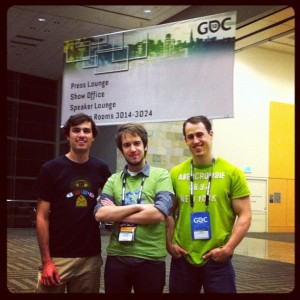 EG: And lastly, being a Kickstarter funded project, what do you think will be the future of these types of crowd-funding strategies? Will Kickstarter usher in an independently funded Renaissance in game production? Or is it a supplemental method to traditional production?

DM: Kickstarter is definitely it’s own new frontier for development, but it has it’s own limitations and drawbacks. If you want to do something really ambitious on Kickstarter, you need to already have a strong network, and an existing fanbase. You’re not going to just come out of nowhere and raise three million dollars.

For small developers like us, it’s exciting because it lets us cultivate a small audience and raise a small amount of money, without having to form a start up and search for a publisher, which is something none of us want to do right now. We’re only asking for five thousand dollars, obviously that’s not enough to actually pay any of us, we’re just using it for software licenses and supplemental assets. Running a Kickstarter has been a lot of fun, but also a lot of work! We’re excited, and we’re on track to make our goal. We want to thank anyone and everyone who’s shown an interest in the project, especially everyone who’s backed it! We also hope that you check the game out when it hits the mobile market, there will absolutely be a free/demo version, so look forward to it! (Patiently.)