As I was walking through Megacon a couple weeks ago, I noticed a booth with pictures of a crazy looking guy with an axe in one hand and a giant jug of alcohol in the other. Needless to say, I was intrigued. So I made it a point to head over and check it out. The booth was manned by Fierce Comics, an indie comic label based out of St. Petersburg, Florida. The guys there explained to me that this axe wielding old man was Redneck Red, a resident of the Everglades who obtained super strength and glowing eyes from drinking radioactive moonshine. I’m a fan of off the wall comics like this, so picking up a copy was a no-brainer.

Redneck Red is a man who just wants to be left alone. It’s too bad armed men keep showing up in his swamp, which really leaves him no other choice but to send them a message. That message usually involves killing everyone except one person who can go back home and tell the story. His swamp is full of rare flora and fauna, and it is up to him to defend it. 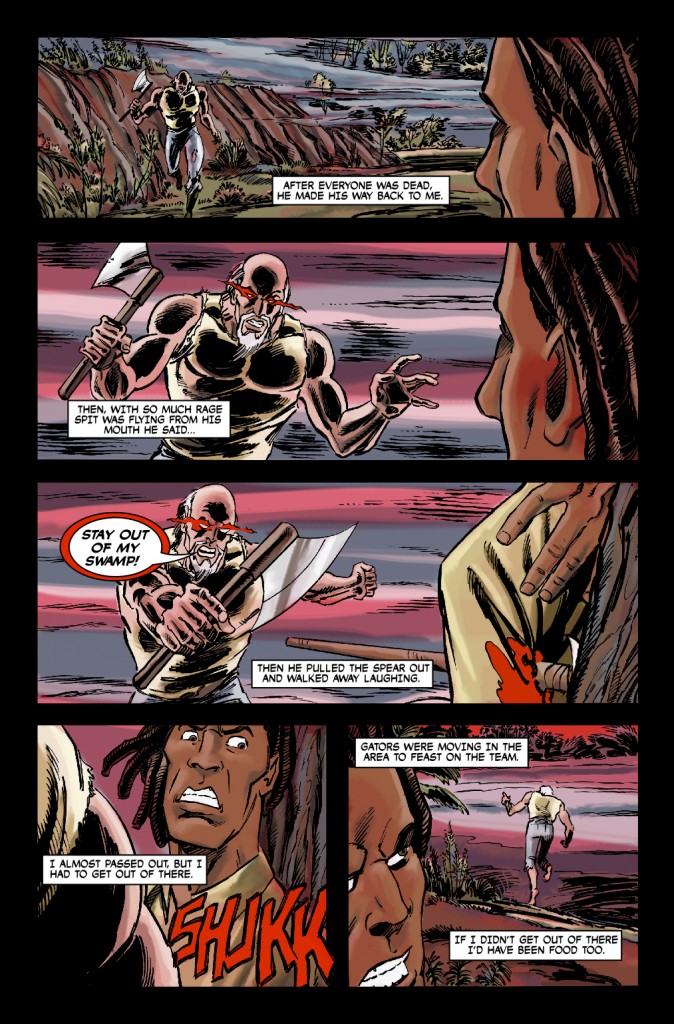 Roar of the Swamp’s story is difficult to explain without giving anything away. A shady company is sending people into the Everglades to procure rare plants for a reason unknown to Red, who just wants them out and will accomplish this by any means necessary. That’s all I can say without giving any plot points away, but the story is interesting and way more serious than I thought it was going to be. The only disappointing aspect of the story is that readers won’t learn a whole lot about Red’s character other than he’s super strong and equally pissed. I can only assume they will flesh out his character more as the series continues.

The writing in Roar of the Swamp is effective in moving the story along and keeping people interested. The speech bubbles are dense in the dialogue driven sections and sparse during the action sequences, so nothing feels out of place. Every main character has a unique personality and they really got Red’s redneck mannerisms down. 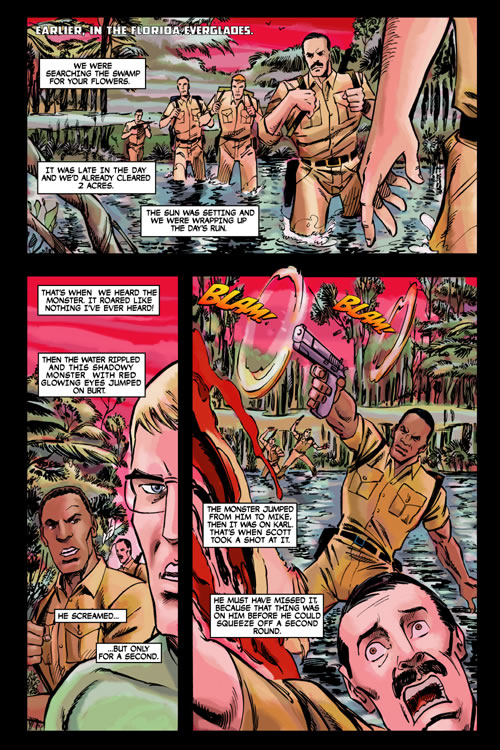 The art style is also well done. At first it looks like standard comic art, but when you take a closer look you can see the attention to detail in the characters and the environments. The whole comic is in color and that really brings it to life. Seeing the Everglades, or a guy with glowing eyes beating the crap out of other guys in the Everglades, wouldn’t be nearly as good in black and white.

The talented team at Fierce Comics did a great job with Redneck Red: Roar of the Swamp. Red himself immediately piques your curiosity and the story, writing, and illustrations keep the pages turning. If you’re a fan of comics I would recommend supporting indie studio and picking this one up. The four separate issues of Roar of the Swamp can be found at IndyPlanet, and you can get the fancy book with all four issues in it at Fierce Comics’ Ebay Store.

4 thoughts on “Redneck Red: Roar of the Swamp Review”