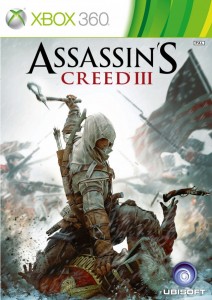 UPDATE: Ubisoft has confirmed both the game logo and the Revolutionary War time period rumored below, and has provided the game’s official box art. Assassin’s Creed III is now scheduled for release October 30th, with a full reveal next week.

Looks like the Assassins had a major hand in the American Revolution. That’s the buzz following the leak of several images surrounding Ubisoft’s Assassin’s Creed III which, if the images sent to Kotaku by an unnamed Best Buy worker are accurate, will be officially unveiled on March 5th. A second image (screengrabbed by Toastervision, originally via NeoGAF,) all but confirms the time period, with the yet unnamed new – reportedly Native American – protagonist giving directions to George Washington during his famed crossing of the Delaware river. The second image looks more like a third-party photoshop job than any official Ubisoft press asset, but looks neat nonetheless.

Is a Revolutionary War setting something you’d like to experience in an Assassin’s Creed game? What new kinds of weapons or cameos from historical figures would you expect from the game? Give us your reactions below, EGs!