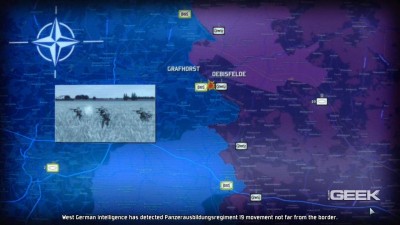 Many geeks who grew up during the Cold War remember movies about World War III scenarios like The Hunt for Red October, Red Dawn, War Games, and Dr. Strangelove where war erupts into all-out conflict between the Warsaw Pact and NATO with an inevitable invasion of West Germany. French developer Eugen Systems and Focus Home Interactive bring us back to those fearful days of the Red menace in Wargame: European Escalation. Wargame re-imagines 20th century modern conventional warfare by recreating the latest technologies of both East and West and pits them against each other on the backdrop of Central Europe, the symbolic divide between both blocs.

Wargame is set in the pivotal decade of the Cold War between 1975 and 1985 where morale in the West was shaken with the U.S. withdrawal from Vietnam and the 1973 Oil Embargo. Tensions between East and West Germany along the Iron Curtain reach a breaking point when an East German soldier defected and killed two East German border guards during his escape prompting patrols on both sides to return fire. The West German government refused to hand over the defector, putting forces on both sides on high alert. Pitting brother against brother, this fraternal conflict quickly escalates.

Similar to its World War II predecessor, RUSE, Wargame features a main campaign divided into sections allowing you to play through the conflict as both NATO and the Warsaw Pact. It includes a skirmish mode allowing players to play on individual maps against the AI on varying difficulties. It also has a prominent multiplayer element where up to eight players may battle it out on various maps with over 300 unique units each with different characteristics. 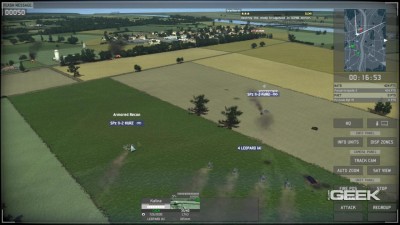 Wargame also features a unit-unlock system where you gain star points from playing both single and multiplayer modes. Players can unlock new units and create decks of units in order to enhance their effectiveness online, which makes playing both modes interchangeably for more star points very crucial.

What players will notice almost immediately is the lack of base construction. That is because the game is more combat and tactical-centric than RUSE, which still had some resource gathering and construction systems coupled with its combat element. Although resource gathering has been omitted, you will still need to earn points in order to call in reinforcements by taking over objective sectors. That being said, the game does a good job in forcing players to choose wisely when planning the makeup of their forces as it could mean difference between victory and defeat.This may also be a source of frustration to RTS purists as the lack of base building and resource gathering might make the game feel a little incomplete.

Despite the omission, the game features a high level of detail with regard to 20th century warfighting from the tactics to the more technical side of the various units and equipment from both militaries. This in-depth focus on combat is enough to keep players busy and glad they don’t have to manage economics because as one may expect, late 20th century warfare is one of rapid maneuvering supplemented with digital equipment that could easily exploit mistakes on the battlefield. Unlike in other RTS games, Wargame is very unforgiving to players that blindly send troops forward without proper reconnaissance and intelligence. Any hedge or forest or town square is wrought with danger. One wrong move and it means heavy casualties. Be prepared to quicksave. 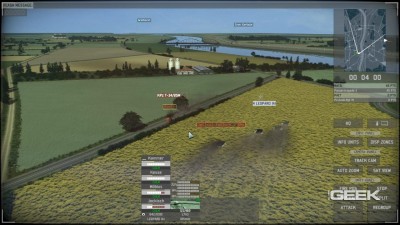 Although the multiplayer would be an instant draw to RTS veterans, the AI should not be completely disregarded as it offers a pretty decent challenge throughout the campaign and skirmish games by using terrain features to conceal units and prepare ambushes as well as executing flanking attacks on your zones of control. The AI challenges players to react quickly in response to the fluidity of modern warfare and adjust strategies to different situations.

All in all, Wargame is one of the most fast-paced, modern warfare RTS games in this generation. There have been other similar takes on what we considered present-day conflict such as Endwar and World in Conflict. Wargame combines great detail in its models and terrain. The unique military units with a competent AI provide a decent challenge. For those that want a combat-focused, fast-paced RTS, Wargame is definitely a worthwhile title.