American Nightmare is the most recent installment in the Alan Wake series, though Remedy has made it clear that this is not the sequel to Alan Wake (2010). American Nightmare is currently only available on Xbox Live Arcade for $15 (1200 G), but Remedy has hinted that it will be coming to PC and it won’t take as long as the original did to show up on Steam. The developers said they thought the game would be a 4-5 hour adventure. We found it closer to 6.5 hours when playing thoroughly and finding all of the collectible items instead of going from goal to goal.

American Nightmare features 2 modes: story mode and arcade mode. Story mode is set “Somewhere in Arizona” about 2 years after the original game. Alan Wake appears in an episode of Night Springs, the TV series that appeared in the first game. He has been stuck in “the dark place” for 2 years and is fighting to rewrite reality to get back to his life. His evil twin, Mr. Scratch, has grown more powerful and plays the role of the antagonist this time around. The story line is just as engaging as in the first game. One interesting development is the use of live action cut scenes with Ikka Villi, the face of Alan Wake. As a result, the emotions are much easier to discern and the player feels more involved in the plot as a result.

The supporting characters are not as colorful as they were in the original, but the dialogue is witty and well-written. The character of Mr. Scratch is developed quite a bit and he evolves into a very creepy figure in the game. I was also impressed at the rather well-done representation of a female astrophysicist! As a physicist myself, I am very critical of the portrayal of scientists in games and movies. This character was knowledgeable and I swear I know people just like her in the physics community. That goes a long way with someone like me!

Right off the bat, fans of the original will recognize Alan Wake’s friend/agent Barry Wheeler, the band Old Gods of Asgard, and the TV series Night Springs which all appear in the opening sequence. Poets of the Fall are back with 2 more original songs under the guise of Old Gods of Asgard. In fact, many elements of the original surface this time around, including a vague, but complete synopsis of the first game. Though it is not necessary to have played the original Alan Wake, it certainly does answer a lot of the implied information and makes the bonus material (radio shows and manuscript pages) more meaningful.

The game play is very similar to the first Alan Wake game. The controls are the same and you still need to use the flashlight to defeat many enemies. This time around, you have the option to turn off the HUD, or simply have it fade out. One downside is that story mode doesn’t have the option to select difficulty, which makes sense considering it’s not a full-fledged game. This makes the game somewhat less challenging than the original, but more accessible to those not as experienced with first person shooters.

Manuscript pages play a more important role in this game. Instead of just being collectibles, they offer clues as to what needs to be accomplished in each chapter. But they also unlock awesome weapons. As you collect more pages, the player is able to unlock chests with more powerful weapons. The atmosphere of this game is not as creepy as in the original. I think that has a lot to do with it being set in a town and not a dark forest. And you know who the enemy is, so the element of confusion and uncertainty is also diminished. But the introduction of several new types of enemies keeps the player constantly changing their strategy throughout the game. The player is always thinking, since these new enemies require different approaches to defeat them. 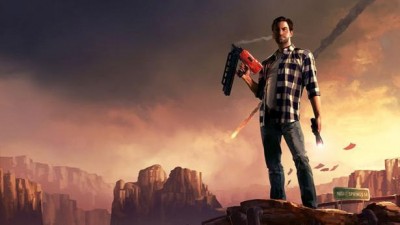 Before its release, the concern was that an XBLA release would limit American Nightmare. However, Remedy found a very creative solution. The game has three finite levels that are revisited as the game progresses. As a result, the game has the same attention to detail that the original had and the player is still able to explore freely (just within the limits of the map). But don’t worry – it doesn’t make the game boring. The goals and enemies change and evolve with each level, as well as decreasing the time spent in each area.

Arcade mode is definitely where the challenge and replay value come from. In arcade mode, you must fight for survival until sunrise. There are 10 levels (5 maps with normal and nightmare difficulty modes) that are unlocked based on your score for each level. You earn points for number of kills, longest undamaged streak, and making it to sunrise. There is a hit multiplier that can be built up with kills, but it resets if you take damage. Since these levels have very little shelter and limited safe havens, the player must find a way to protect against being attacked from behind. If you collected manuscript pages, the corresponding weapons are unlocked throughout these levels as well. Arcade mode will provide hours of entertainment to this downloadable title and challenge the player to hone their skills.

Overall, this was a great game. Newcomers will be excited to play the original to find answers to their questions. Fans of the series will be happy to see another good installment in the series and can look forward to a full sequel (the credits promised “Alan Wake’s journey through the night will continue”). While not all of our questions are answered, we know more about what’s happened to Wake and have new questions we want answers for, especially after the Inception-esque ending. It’s definitely worth your time and will leave you itching for the next installment of this series.