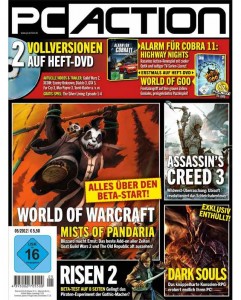 The latest issue of Germany’s PC Action magazine proclaims victory in a battle that brought over 100,000 Dark Souls fans to petition, as the publication includes a spread on the PC version of Namco Bandai’s more-than-spiritual successor to Demon’s Souls. Dark Souls: Prepare to Die Edition will be heading to PCs this August (both for the EU and NA regions) with two new boss encounters: “Guardian of the Tomb” and “Black Dragon”.

Dark Souls released in the West on October 4th of last year for PS3 and 360, and was praised for keeping the aesthetic spirit and heady challenge of its forebear. The petition believed to have contributed to the PC version’s release was launched shortly after the game’s launch.

One thought on “‘Dark Souls’ Coming to PC with More Bosses”