The Disgaea series is something I hold close at heart. As the last vestige for tactical, turn-based combat I very much support the reoccurring series’ constant appearances. I’m even more excited when NIS releases one of the beefed-up handheld counterparts to their long running Playstation series. I’ve constantly been a believer that the Tactical RPG genra has always belonged on handheld devices. It’s just so much easier to grind when you’re also watching Storage Wars. Still, as a fan, I must say my experience in the Netherworld was a little less than satisfactory this time around.

I won’t bore you with too many details about Disgaea. At this point you’ve either played it or you haven’t, and if you haven’t you’ll be keen to find out you can grab Disgaea 1 on PSN for half the price of Absence of Detention. But for those who would like a brief recap I’ll do my best.

Disgaea is a Tacticle RPG that relies heavily on two things: level grinding and humor. You’ll create dudes, level them, move them around a grid, and kill a bunch of other dudes. What makes the game special is what happens in-between the rampart killing of dudes: insane leveling, character customization with special skills, Geo Blocks, character stacking attacks, item world leveling, evilities,  Magichange weapons, and effeminate characters with no shirts running all over the place spouting nonsense on their way to level 9,999. All of this adds to a nigh infinite amount of playtime in the challenging and engaging world of Disgaea.

Greatfully, the Vita counterpart does come with all the DLC from the original PS3 version. That’s a few extra chapters and characters in your party right there. I do wish they stuck with precedent and added a whole alternate story following one of the side characters, but beggars can’t be choosers. 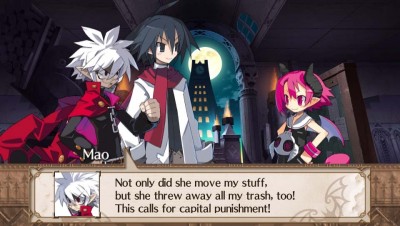 If you like still cutscenes you’re in for a treat!

With that said, the game does have it’s faults. Compared to the other entries in the series, Absence of Detention suffers from the most bland characters. The setting is in the Evil Academy, where demons learn to be their most evil. While a good set up for some interesting locations and dialogue, the setting hardly delivers the payoff akin to other Disgaea titles. Not only that, but D3 takes it’s sweet time getting to any plot points at all. Half the game is spent dawdling around the university with no other goal than “eventually defeat the overlord.”

The characters also have their  share of scruples. The personifications are bland and lack the spirit that came with characters like Etna, Laharl, and Axel. The voice acting is well recorded as usual, but the voices are shrill and rarely have anything interesting to say. Mao, the main character in D3, is insufferable to listen to for most of the game and the humor that usually keeps me hooked from beginning to end falls short of it’s usual luster—instead opting for predictable cliches.

On the plus side, the game looks great on the Vita. It is easily as good as its ps3 counterpart. Still that’s sort of like saying my homemade turkey sandwich is just as good as that turkey sandwich my mom made. Neither of us really strove for excellence, so when when we both fall short it’s nothing to celebrate. Man, I wish someone would make me a decent sandwich. 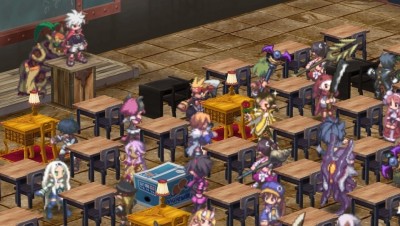 Amass your team and allocate skills via the classroom.

The biggest failure in D3 is actually a result of the Vita hardware. The back touch panel can be used to perform actions such as navigate menus and adjusting the camera positioning. Sadly, the sensitive regions also fall on the exact spots you would comfortable rest your hands, leanding to moments of sheer confusion when the menu begins scrolling out of control or your camera begins jumping between settings. It’s an easy enough fix to just turn off the rear touch screen, but still an unneeded hastle caused by the need to incorporate useless gimmicks into the game (see motion controlled prinny loading sequence).

Regardless of these problems, Disgaea 3 is still a Disgaea game. It is far and away the best traditional tactics game you will find for the Vita—as well as the only traditional tactics game made for the system. This version will inevitably offer up tons of hours of battling and entertainment that just doesn’t exist on the portable system right now. However, if you’ve never played Disgaea before this is quite possibly the worst jumping off point. Especially when you can go on the Playstation Network and download the original for way cheaper. For most others, Disgaea 4 wll provide you a better experience than D3 as long as you’re willing to play it on a console. But if you haven’t played D3 and love the series, than it’s as good as you’re going to get and will still give you that grind heavy, irreverent experience you’ve grown to love. The game plays stupendously on the handheld, and I still argue that Disgaea is meant to be played portable.