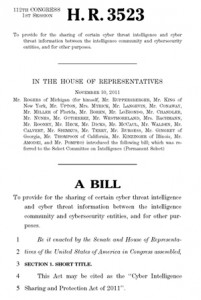 Despite a veto threat from the office of the President, the United States House of Representatives passed the Cyber Intelligence Sharing and Privacy Act (or CISPA) by a vote of 248-168 this past Thursday. 206 Republicans lead the vote, with 42 Democrats joining in approval. The bill seeks to allow federal agencies that protect classified government computer networks to share information with  American companies in the name of protecting private networks.

Critics of the legislation have denounced it as too broad a proclamation, claiming the lack of oversight installed into the bill allows for information sharing to be allowed not only in alleged cases of cyber security, but national security as well. Amendments added onto the bill during the debate process that granted the Department of Homeland Security more oversight were not enough to quell opposition.

Rep. Mike Rogers (R-Mich.), Chairman of the House Intelligence Committee and author of CISPA, praised the bi-partisan support the bill has received since its authorship. “We can’t stand by and do nothing as U.S. companies are hemorrhaging from the cyber looting coming from nation states like China and Russia,” cautioned the Representative.

Michelle Richardson, legal counsel for the American Civil Liberties Union, released a statement following the bill’s passing, stating, “Cybersecurity does not have to mean abdication of Americans’ online privacy. As we’ve seen repeatedly, once the government gets expansive national security authorities, there’s no going back. We encourage the Senate to let this horrible bill fade into obscurity.”

The Cyber Intelligence Sharing and Privacy Act can be viewed here, in its passed form. The bill will next approach the Senate, although a date for the vote has yet to be announced.