Journey. There couldn’t be a more appropriate name for this game. In Flower and flOw, the developers at thatgamecompany crafted wonderfully expressive and unique scenes. But those games didn’t have the narrative which is so critical to Journey. All of Journey’s parts work harmoniously together, but the concise and poignant story is what makes the game an instant classic.

Journey is a 3D platformer with a focus on exploration. Your character is incredibly mobile. It can use scraps of fabric to charge up its scarf, which allows it to fly temporarily. Finding hidden symbols lengthens your scarf, letting you fly for longer periods of time. Mobile as your character is, it is just as defenseless. Combat isn’t the focus of the game. In fact, it would be wrong to say there is any goal other than to reach the pillar of light in the distance. 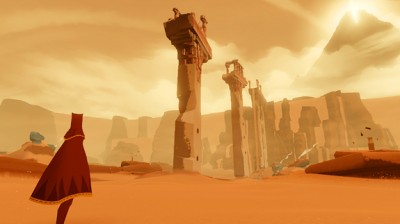 Along the way, your character acts as an acolyte and an archaeologist, uncovering its people’s history through wonderfully minimalist cutscenes and moving pictographs. There’s no dialog, and nothing is stated explicitly. You feel like you’re studying an ancient race, but the main character’s connection to this history makes it feel personal.

Journey can be experienced with a companion, but there’s one caveat: you cannot verbally communicate with your partner. In fact, you can’t even choose your partner. If you’re connected to the Playstation Network the game will randomly pair you with someone else. The two of you can help each other or ignore each other if you so choose. At first I was upset I couldn’t share Journey with a friend. It’s a beautiful game, and I’d love to explore each stage alongside someone I could discuss and appreciate it with. But then I realized the developers eschewed traditional co-op for the same reason they did voice chat: it would undermine the alien nature of the game.

So much of Journey’s poignancy draws from unfamiliarity. You cannot communicate, you’re given minimal exposition and context and you’re on a foreign world with foreign creatures. But the story builds on universal themes which overcome these barriers. The results can only be described as one of the most personally affecting experiences in gaming.

I could go on for an hour listing all the aspects of this game which I enjoyed. The art direction is totally unique among modern games, and hearkens back to the Miyazaki film Nausicaa of the Valley of Wind. Austin Wintory’s score is nothing short of a masterwork – just listening to it on its own is enough to make your jaw drop, and combined with the game it’s completely gripping. Your character’s animations are wonderfully detailed and realistic: from struggling up sand dunes to flying around ancient buildings, every movement feels natural.

Journey clocks in around 3 hours or so, but it feels properly edited and well-constructed rather than short. I can’t level any complaints against it, and I’d wholeheartedly give it my recommendation. Journey is sure to be remembered as a turning point in the perception of games as art, but more importantly it’s a deeply moving tale which I won’t soon forget.