When I booted up Kid Icarus: Uprising, I’ll admit that I was fairly excited. I have been waiting for a proper Kid Icarus game for more than two decades and in that moment I was finally about to play one. However I knew that the default control relied on the dreaded hybrid control scheme that I touched on in my Rolling Western review. Knowing this, I was expecting to be frustrated with the control, but I still believed the game itself would be a fun diversion. I had no idea what I was getting myself into, because Uprising’s control is not only completely unique and great, but the game itself is leagues beyond what I thought it would be.

Design-wise, Uprising throws out nearly every convention from the original Kid Icarus and instead transforms the franchise into a straight up shooter. The action is split up into what I can only describe as exhilarating on rails shooting sequences not far removed from Star Fox, and on foot third person shooting sections. In fact, conceptually it reminds me of the rather forgettable Star Fox Assault on Gamecube as that game blended those two styles together as well.

Controlling these sections both involve the hybrid control scheme of using the circle pad and touch screen in tandem. The developers must have realized this was uncomfortable because they decided to ship the game with a stand. Out of the gate I tried the stand, and it didn’t take long for it to prove to me that this was the way to play Kid Icarus. It’s much more comfortable than trying to hold the unit itself and the still screen helped lock the beautiful 3D effects in place. Still, this is a portable game, we shouldn’t have to be tethering to a table using a stand in order to play it, so I’ve also put in plenty of time playing the game just using my thumb on the touch screen. It works well enough, and I have the multiplayer victories behind me to prove it.

What is so unique about the control is how it works. The on foot sections admittedly have a steep learning curve. Both camera control and aiming is done via the touch screen. Holding the stylus down to the touch screen aims Pit’s reticule, while swipes across the touch screen literally spin the camera. To stop the camera the player simply taps the screen where they want it to stay. Pit describes this method the best within the first stage when he claims it’s like “spinning a globe.” It sounds messy when written, but after a handful of stages it becomes second nature. While there are alternate options to play the game stylus free, I’m not sure why anyone would want to, and I’m not even sure how far those players would make it. The game is so fast paced that the speed and accuracy of using the stylus (or thumb) is simply the only way to go.

The flying stages are a bit more traditional in their control as the player is only being asked to shoot and move. What sets it apart from say, Star Fox, is that players can take the reticule and literally throw it into the direction they choose. For example, if the player is preoccupied with a pack of enemies on one side of the screen and another more threatening enemy shows up on the other screen, they are able to swipe and flick the reticule over to the other enemy, and then pick it up from there to continue firing. This is much faster than manually dragging the reticule over to that area. 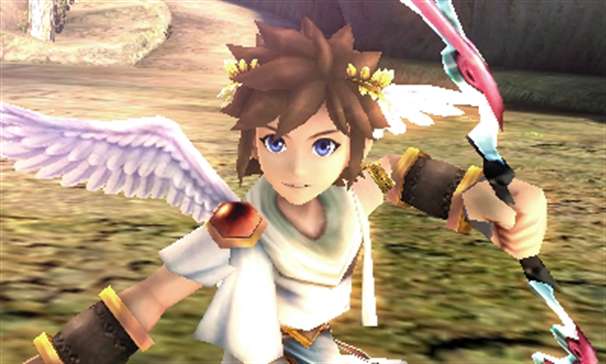 Actual combat itself is boiled down to shooting and dodging, but it’s deceptively deep on a whole. Standard shooting does little damage. If Pit waits a few seconds, he is granted a single charge shot. Rolling out of the way either left or right and then firing does more damage. Rolling backward or forward and shooting fires off another type of shot unique to the weapon Pit is using, and finally all of these can all be modified further if Pit has a charge shot ready and waiting. Along with this, if Pit is close enough to an enemy he’ll perform a set of melee attacks.

The weapons themselves are also deeper than they appear. I had every intention of sticking with the default weapon offered at the start of the game, but I was quickly drawn to trying to find the weapon that worked best for me. Pit can choose between literally hundreds of blades, bows, staves, arms, cannons and more. Each offer their own strengths and weaknesses. Heck, no two weapons are alike, even if they’re the same exact weapon. I had three of the same staff before and they all offered different attributes, yet fundamentally they had the same attacks. Players can also fuse weapons together to make stronger ones. Don’t be surprised to spend plenty of time playing around with weapons and finding just the right ones. There is even a handy testing mode where the player is whisked off to a training ground with an enemy that shows the amount of damage all the attacks do.

Along with equipping weapons, players can also equip special items for Pit to use during the on foot sections. This is handled as a unique puzzle game of sorts where each item is visualized by a Tetris-like shape. These shapes can then be twisted and turned to fit on a small grid. The idea is to try and cram as many shapes as one can so that Pit carries as many items as possible. This is such a small little addition, but again, it adds just another layer of depth to the game.

Then there is the Fiend’s Cauldron, where players select the difficulty of each stage. Before a stage begins the player is taken to the cauldron screen. From here they wager hearts (in game currency) to play on harder skill levels. The higher the intensity that is chosen, the bigger the rewards in both loot drops and hearts. When the player dies (and they will) they lose the wager, their hearts removed and the intensity level automatically dropped down. This process repeats each time the player dies. This is secretly one of the most brilliant takes on game difficulty that I know of.

Sure, plenty of games offer a screen suggesting to play on an easier difficulty when the player loses, but never are they as punished and shamed as they are in Kid Icarus. The fact is, anyone could beat this game. Playing on an intensity of 2 or below involves little challenge, but it also involves little in the way of rewards. It is absolutely demoralizing when suffering countless deaths throughout the game. There was a stage toward the end of the game where I started on intensity level 6 and was dropped all the way down to 2.5. Believe me when it left me feeling disappointed in myself. Yet, I was able to press on through the stage and granted with the choice of trying it again or moving onto the next thrill ride.

It is here where the game develops its deep replay factor.I think I’ve played the first stage about 10 times alone. Between the different loot drops and earning achievements, there is almost always something new every time a stage is played. Different stages have a higher frequency of handing out specific items as well, and hidden doors that can only be accessed when playing on certain intensity levels ensure that players will be willing to give it their best. I’ve seen doors that demand to be opened with an intensity level of 8. I can only image what untold treasures lie behind them.

The vast achievement system, called Treasure Hunts, also add plenty to do within the game. Though this is a minor spoiler, the game has well over 300 different achievements. The achievements are spread across a large grid and once unlocked they begin to reveal a portrait. Along with that, the achievement always comes with a reward, be it hearts, an in game trophy to view, new weapons, items, or music to listen to. Also, once unlocked, the spaces around that place then offer hints on how to get the other achievements. It is easily one of the most fun and addicting achievement systems implemented into a game. 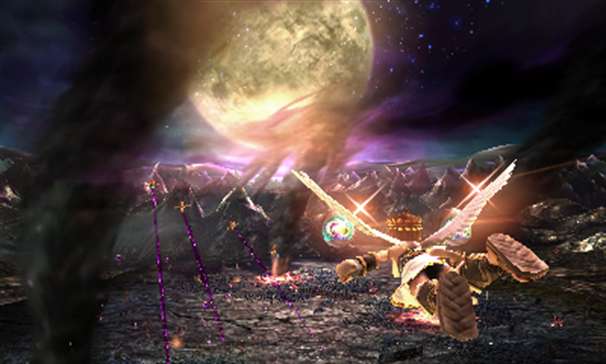 These are just the big items, the fact of the matter is that this game is absolutely packed with content. There are online multiplayer modes, physical AR cards to collect (or if you’re like me, seek the cards out online and scan a ton of them over the course of 45 minutes and reap in those trophies and hearts), hundreds of trophies to unlock and find, all sorts of fun stats to check out for those that are heavy into stat tracking, item trading through spotpass, and plenty of other neat little diversions to check out. Heck, even the menus are fun to play with, allowing the player to drag and shake menu items just for the sake of doing it.

This is all bound together by a significant single player experience that offers the most thrilling story and action sequences that Nintendo has ever put together. While the story does in fact touch on some heavy themes, it smartly knows its place and never goes too far with the melodrama and always has tongue firmly planted in cheek. That said, the story takes some incredible twists that always leave the player guessing who is on whose side. The cutscenes and dialogue are all handled in game with the characters almost constantly talking to each other. This is all backed by a hell of a sound track, all fully orchestrated music that is synced beat for beat over the flying sequences.

When I sat down to write this review I was trying my hardest not to gush about Uprising, but I suppose I just couldn’t help myself. I even waited a few days since completing the game to sit down and write this in an attempt to gain some perspective, but the fact is I’m still smitten with it. This is the sort of game that reminds me why I love this hobby so much, and I’m willing to go as far to say that Kid Icarus: Uprising will be remembered for a long time to come. It is the best 3DS game on the market, and in my eyes, an instant classic.

It should be noted that I’m right-handed. Control COULD be difficult for lefties, though there are options. I’ve looked around on forums and have seen that some lefties also appreciate the control (they use the face buttons or Circle Pad Pro for movement). Still, there could be barrier there.

Since I played through most of this game using the stand, I also ran the 3DS through my PC speakers. Trust me, listening to this game on a decent set of speakers was a treat. If you use the stand, I advise trying this out.

Even if you have no interest in this game but enjoy great game music, check out that soundtrack because it’s incredible.