The entire internet has been abuzz lately over the indie RPG dungeon crawler Legend of Grimrock. We were very fortunate to receive an early copy of Grimrock from the developers at Almost Human, and over the weekend we put the game through the ringer.

Or perhaps, we should say, the game put us through the ringer.

Set within the mountain dungeon Grimrock, four tethered prisoners fight for their lives, freedom and sanity by navigating the labyrinth, slaying its demonic and monstrous denizens and eating whatever they can find to fight off starvation. A story swirling around Grimrock unfolds by finding esoteric messages in its hidden passageways, and through mysterious shared dream sequences. But the why and how of this super prison take a backseat to the more important task at hand: your survival.

Grimrock is a dungeon crawler in the most literal and classic of definitions. The four prisoners’ names and occupations are irrelevant. You can play as the four pre-set characters the game gives you, or you can create your own party from a mix of male and female humans, minotaurs, insectoids, lizardmen, fighters, mages, and rogues. Each class is broken down into several different skill specializations which gives Grimrock plenty of replayability as you mix and match your tank, blaster, and scrapper combinations.

The four characters will always stand in a square formation as seen in the lower right hand side of the screen. The characters on the top left and right are standing in the front left and right, and the characters shown the bottom are on the back left and right respectively. As you move forward, backward, and turn 90 degrees left and right, so does the entire group. Grimrock is laid out on a giant grid. Your characters and their enemies must respect the rules of the grid at all times. This might be a bit jarring for gamers who have become accustomed to modern first person shooters, but for fans of classic grid-based RPGs, the experience is most indeed welcome. 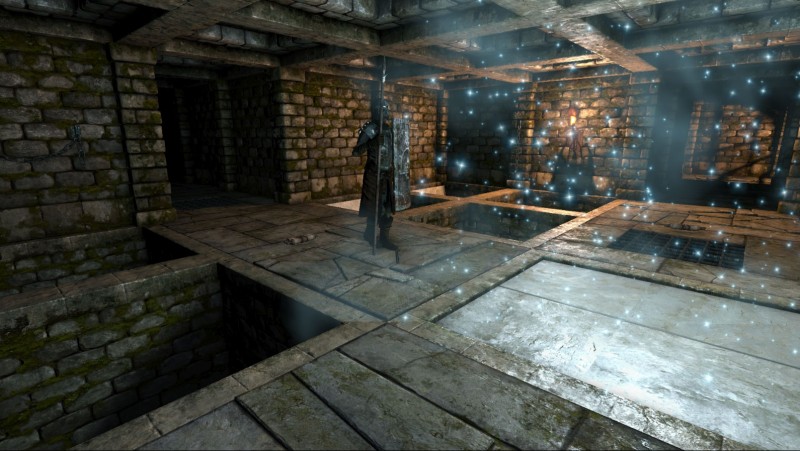 The puzzles will have you holding your head in your hands, but they're so, so satisfying.

Enemies can only attack what is directly in front of them, though a few do sport some annoying ranged abilities. Tactically, you want sidestep out of their way and attack them from their flanks. Finding an open grid of four squares helps tremendously as you can continuously dance around them. However, if facing off against multiple enemies, you’re better off running away and singling them out. All of the enemies within Grimrock are deadly and a toe-to-toe confrontation will almost always end up in either your death, or a status affliction that will make you wish you were dead. Due to the game’s many nefarious traps and misleading layouts, you’ll be cornered and devoured regularly.

Speaking of nefarious traps, Grimrock has some of the best puzzles we have ever encountered in a video game… ever. They range from hidden switches, to portals, to trap floors, to pressure plates, and more. In fact, for this video review, we are intentionally not showing how to solve any of the puzzles. We felt that would be a bigger spoiler than if we told you anything from the storyline. The feeling of satisfaction from solving the puzzles single-handedly is second to none and would certainly take the feeling of accomplishment away from the player if we showed them here. We aren’t going to lie. There were a few puzzles that left us with our head in our hands for hours. But that “a-ha!” moment of realization can’t be found in many other games. These puzzles are nothing short of diabolical, and we absolutely love it.

Atmospherically, Grimrock is a dungeon. Its walls are monotonously patterned. But while that would be a negative mark for any other game, its relatively small selection of wall designs serve a purpose: breaks in patterns may lead to secret switches or passageways. 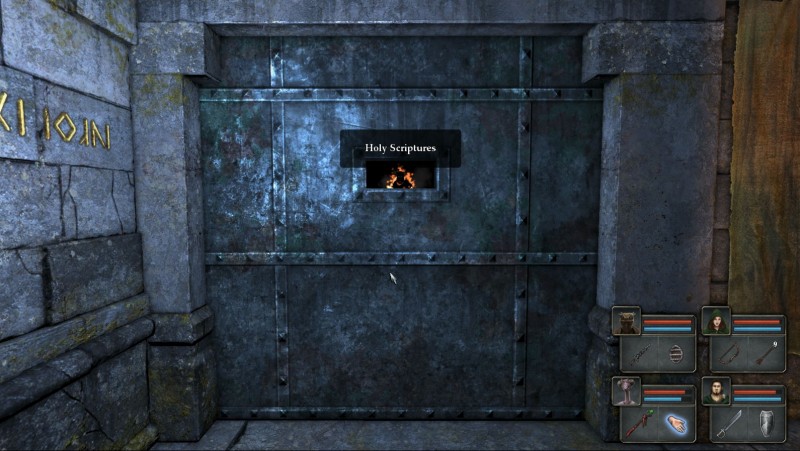 Grimrock has a tendency to get a little creepy sometimes, playing off of your emotions.

Darkness envelops most of the hallways and atmospherically creates a wonderful effect similar to Amnesia: the Dark Descent. The claustrophobic and ill-lit environment make you feel isolated and alone, a powerful emotion created properly by select few games.

Grimrock is an adventure of exploration and discovery on almost every level. The game encourages tinkering with every object, spell combination, and pathway. You never know what you’ll find or unlock by simply flicking a switch, or mixing a new herb into a potion. But it’s so deep, that unless you have a steel trap memory, you’ll likely need a pen and paper to take some notes to keep everything in order. In fact, if you’re absolutely hardcore, you can max out the game’s difficulty which removes the auto-map. So sharpen your pencils and get that grid paper ready. You’ll need ‘em.

The game’s choke point, however, is its combat. Even though it is grid-based and in real-time, we wish it was a more involved process. As it is, combat boils down to quick swipes or spells, and then avoiding your enemies until your abilities have recharged. Blocking or parrying would have made a big difference. While the enemies initially look interesting (and in some cases, downright frightening), once you’re close up, they lose some of their luster.

But those negative points aside, we can’t deny the remarkably fun time we’ve had while trapped inside Grimrock. The challenge, the exploration, the experimentation, the replayability with different classes and races, make this budget priced indie adventure a must-play game for RPG, dungeon crawler, and puzzle fans everywhere. We can easily say that if you’re interested at all in Grimrock, it’s worth buying.