The race has begun

I’m back with another update for you guys as promised. No prologue this time as my adventures shall remain permanent now. That’s right! No more character wipe. For those of you who follow along in the virtual world that is Tera, Open Beta began. Was it a success? Eh… well, it was questionable at best. But it did not deter me from playing the game! So as I sat their patiently awaiting the flood gates to open(servers to go live), I could only wonder what my leveling experience was going to be like this time… again.

As soon as  the servers went up, everyone rushed out of the gates! At least, everyone except me—it was a sad day indeed. It seemed they were having a bit of trouble with the IP access of a lot of East Coasters, myself included. I sat patiently refreshing Tera’s twitter hoping for positive updates. Two hours passed before I began to get slightly annoyed until… HUZZAH! A break! It seems a very smart forum-goer had figured out a solution. To save you all the boring details behind the scenes, just know I managed to get my client fixed and was able to start my game and begin leveling. 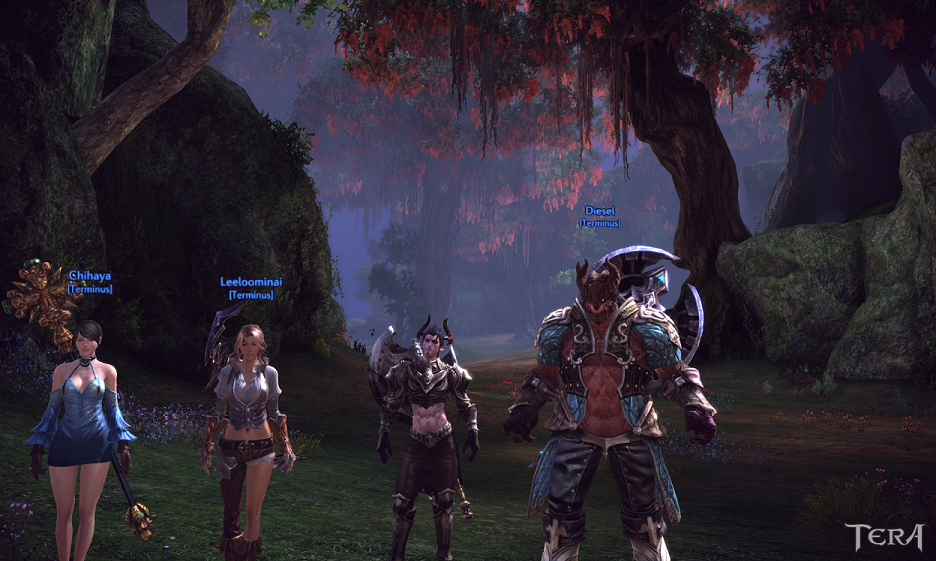 Due to being behind others at the start, I was forced to do a lot of leveling by myself. As much as I’d love to tell you it was rough and how I went through tough trials and tribulations, I can’t. It was pretty easy, in fact. This wasn’t my first rodeo(HA! Tera Pun) and most of these quests I’d done numerous times.  Skipping passed the boring dribble, I hit my stride around the mid-level of 18 to 20. Those familiar with the Tera world knows very well that means the first dungeon instance was approaching. As I plowed through main story plot quest chains, I found myself at the doors of Bastion, one of the more noob friendly instances. Was I to brave this alone? Hell no! That would be suicide. Thanks to closed beta I’d managed to guild-up with a lovely bunch of people. Not only do they share the same common goals as I do, but they are top notch players and pvp’ers. And since Jagged Coast has become my official home being the PvP server it is, it’s not a bad idea having friends while you level.

My first dungeon run was a peace of cake due to my lovely companions depicted above. A lively bunch, no? You can see the name “Terminus” below our heads. Yes that is in fact the name of our guild. I’ll circle back to that by the end of this entry so don’t sit there scratching your heads too hard.  So with the help of Chi, Leeloo, and Diesel we were able to tackle Bastion. Easily completing the tasks given to us to perform while inside, as well as crumbling a giant Goliath of a rock golem. Was there loot? Of course there was loot! Glorious, glorious rare loot! Upgrades for some, vendor trash for others, a good haul nonetheless. 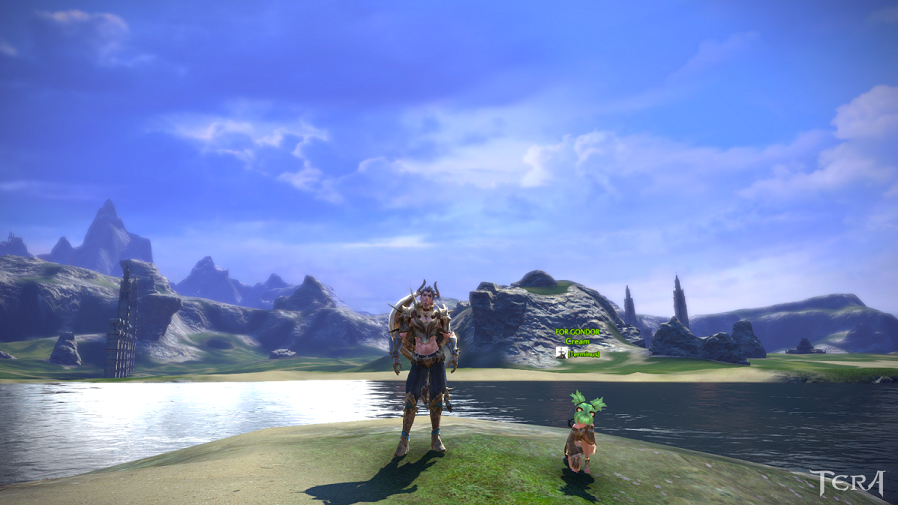 Capped & Getting my PvP Legs

It took a bit longer then I’d hoped but I hit the level cap for Open Beta. Unfortunately, that means I only managed to get to level 32, a tease of a tease thanks to the people of EME. No worries, as they are eagerly counting down the days to launch as much as I am. So what if I actually have it marked on my calendar! MOVING ON!

So I hit level cap, which meant between the way I had another long line of quests and story chains. One of the chains leading to the second dungeon of the game. Sinestral Manor was the name, and just as it sounds this place was SINISTER. The mobs consisted of giant axe-wielding ogres as well as spellcasters who loved to snipe squishies from the background. As we progressed to the higher levels, something even more vile was revealed. We were in bat country, and by that I mean there was nothing but bloodsucking vampires and demon baby doll things everywhere. Now I see where the dungeon got its name from. But have no fear, like every other monster that has crossed my axe’s path, they were slain—and slain hard might I add.

After what seemed like countless hours of farming, I managed to walk away with some epic loot! Even a few legendary items. With nothing much left to do, and beta quickly coming to an end, we did what any normal guild would do on a PvP server. We declared wars on other guilds and organized deathmatches. Countless 5v5’s and 10v10’s were had, as well as back-to-back dueling to help improve my own skill as well as those in the guild. All in all, I’d say successful training.

As you can see in the image above, I’m standing pretty decked-out in gear next to one of my close friends in the guild and probably the best sorcerer on the server(I wish I was exaggerating). I’m sure in the future you’ll be hearing about tons of our exploits as we generally are wrecking in the same team while we PvP. 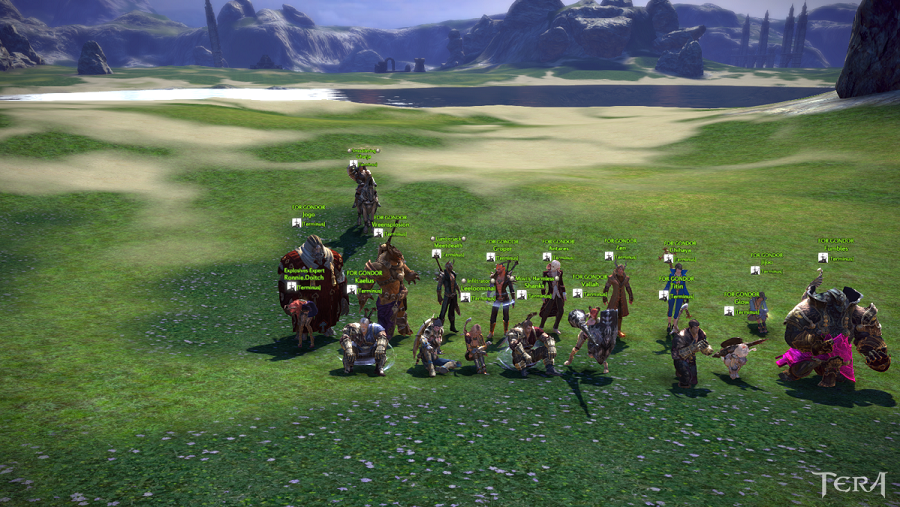 Now we come full circle, back  to the guild I mentioned earlier. This is a somewhat sloppy screenshot I managed to take. There is, however, more than this in the guild. About six others are standing on a ledge high above us taking their own screenshot in. I just thought this one was a little more personal sine you can see most of us and our names. Before you even leave a comment or ask yourself anything, yes that giant rock-like creature is wearing a pink dress. I have no clue why either… he’s very pretty though. Anyways, this is my home on Tera, this is Jagged Coast and this is the Terminus guild. 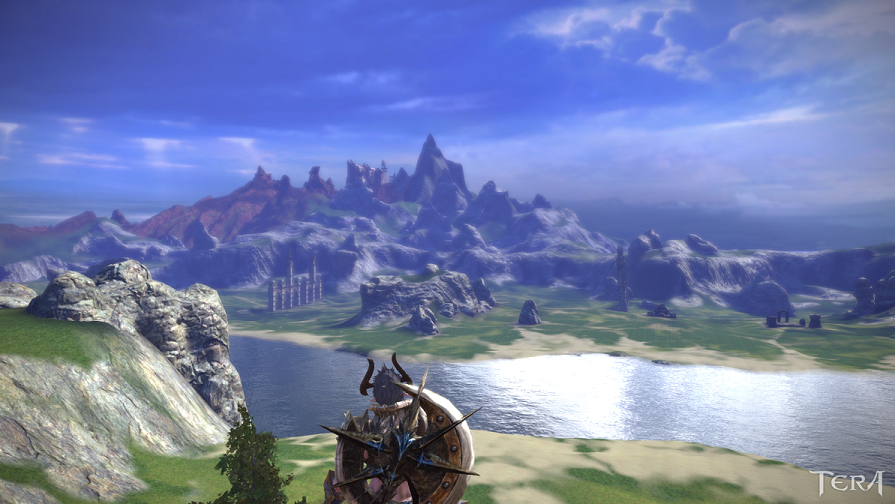 I hope you enjoyed the REAL first installment of My Life in Tera. There will be no doubt plenty of crazy screenshots and weirdo’s doing who knows only what. I’ll do my best to get some i- action and combat images as well. I might even be able to include some of our massive Guild versus Guild battles that take place. If  you managed to get to the end and find yourself having suggestions or wanting more, please leave your enthusiasm via comments. Let me know if there’s anything you’d like to see or anything you’d like to hear about. Until next time, happy leveling for those of you playing Tera! Maybe I’ll see you in game.