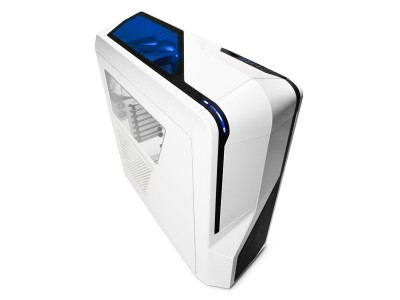 The Phantom 410 is another PC case from NZXTs crafted midtower line. At 21 inches tall, 20 inches long, 8.5 inches deep, and weighing in at 20 pounds, this midtower is a smidge bigger than the Tempest 410 elite, another case we reviewed from the crafted midtower series. Three fans are preinstalled for you, but if you need more cooling there are mounts for three more fans, or just two radiators for water cooling.

It’s easy to see the phantom is aptly named, but this case doesn’t remind us of phantom of the opera. It reminds us of Portal 2, and as gamers, that’s EVEN BETTER. The agro crag angles and the dualing black inserts gives this case a futuristic feel that really earns it the title of a “crafted midtower.”

The front of the case has a door that can be opened and closed witha push release latch on the right side. The power and reset buttons are on the top left, mounted into a black insert. Similarly mounted on the right side the audio in mic out, dual usb 2.0 and 3.0 ports are present. Behind the usb ports is a 3 step fan control for speeding up or quieting down your fans. The side window is just big enough to allow you to see the processor and video card on most motherboards. Below the window is honeycomb mesh for extra airflow and a place to mount a fan.

The inside of the phantom is what we’ve come to expect from NZXTs crafted midtower series. The PSU is bottom mounted. There is room for 3 5.25 drives and 6 3.5 drives. There is a cable management system made of holes and rubber gromets to help you keep your build looking clean. One thing NZXT left out on this case was the standoffs, or risers, already screwed in for the ATX configuration, but they provide you standoffs so no biggie. Mounting the 5.25 and 3.5 drives is identical to the Tempest 410 Elite. The drives settle into their trays, and the screwless design holds them in place. this makes the initial build and future management pretty easy.

What separates the Phantom from its crafted midtower bretheren is the hard drive rack. Pinch the top and bottom of the rack and it will slide right out. Right off the bat we notice that the drive trays were backwards. This is the first case we have built with that requires you to run cables through the back of the case. Simply put, it forced us into having a cleaner build. Another feature of the removable hard drive rack is the option to mount a fan directly on the side. In combination with the standard fan in the front of the case, the fan on the other side of the rack ensures maximum air flow to pull as much heat as possible off of your drives. On top of that, it swivels, so you can direct your airflow towards the fan at the back of the case pulling hot air out. On top of that, it looks pretty cool.

The Phantom 410 is yet another solid case from NZXT that hits the 100 dollar mark. If you’re looking for a standard mid tower with a little bit of flair, this is the case for you. NZXT was nice enough to throw in a sleeved blue LED kit for this review, and we think it makes a nice difference to the finished product. The kit includes the sleeve with LEDs, and control panel with three brightness levels and a power switch that mounts into a PCI slot. If you’re thinking about buying this, or any other case from NZXTs crafted midtower series, pick up the LED sleeve of your choice to give your rig a little something extra. 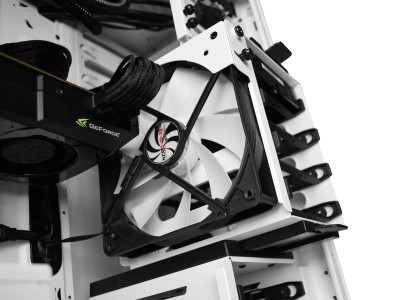