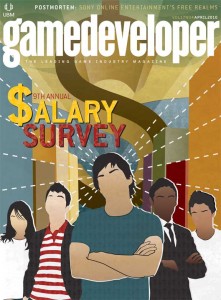 2011 was a pretty flat year, according to the findings of Game Developer magazine’s annual salary survey of industry professionals. Salaries were calculated and compared across discipline, region, experience level and gender from 2,500 interview-ees (out of 4,000 respondents). 66% of respondents netted a higher income than last year (up from 56% in last year’s survey), the average yearly salary within mainstream production evening out at $81, 192 (compared to 2010’s $80, 817).

An overall expected set of statistics, it is intriguing to see that most year-over-year gains went to newcomers across the board. The only publicly available industrial survey of its kind, the full results of the 2011 Salary Survey can be found in the April issue of Game Developer.