After I saw the first trailer for The Raid, an Indonesian action film featuring guns, knives, martial arts and just about everything else, I was sold. A few weeks ago I was excited to hear that The Raid: Redemption (U.S. title) was finally coming out, but I was then disappointed to learn that it was not going to be immediately released in my area. However, the face melting action that is The Raid: Redemption has now been released everywhere, so if you’re an action fan you need to see it. 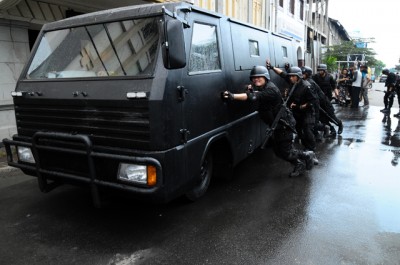 Think about the craziest action movie you’ve seen. You know, the one that made you involuntarily jump out of your seat during that one ridiculous fight. Yeah, that one. The Raid is right up there, if not past that one. Throughout the course of this movie you will see guys get shot, punched, thrown, stabbed, elbowed and kneed, and just when you think a fight is all finished The Raid boots your ass right into another one.

The Raid handles its plot like we handle an annoying fly buzzing around our head. The story hangs out for a bit every now and then, but after a little while The Raid swats it away to continue its mayhem. Overall the plot is pretty simple. A SWAT team is tasked with taking down a crime lord who has taken up residence in an old apartment building. The only problem is that crime lord rents out the apartments to murderers, gangsters and other criminals who need a safe haven. After the SWAT team’s cover is blown all hell breaks loose and that’s when the story flies off for a while. There are a few small twists, but there really isn’t enough character development to make you care about anyone other than the main character, and at a certain point you will stop caring about the story all together and only focus on the action. 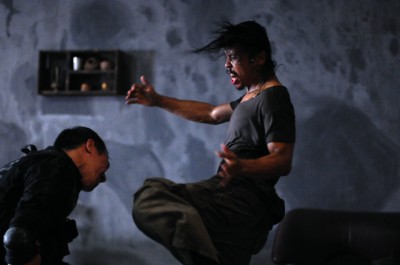 The apartment building setting is a great idea. It almost feels like a video game and each floor of the building is a different level. The building itself is rundown, dusty and dirty, and it looks like the kind of place you would find the scum of the Earth inside. The cramped apartments and hallways also give way to some thrilling close quarters combat. There are obstacles such as furniture and holes in the floors and ceilings, but most importantly there are plenty of walls and edges to slam criminals against.

The audio was an interesting aspect of The Raid. As you probably expected, the movie is entirely in Indonesian with English subtitles, which is perfect for a movie like this. The sound effects are your standard gunshots, punches, etc, but the music really adds some intensity to the movie. Almost the entire movie has an instrumental soundtrack created by Mike Shinoda from Linkin Park. The music is very aggressive during a fight and atmospheric otherwise. At times, like when someone is hiding, it will stop completely and really ramp up the suspense. The best thing about the music is you always know it’s there, but it is subtle enough to not draw you out of the movie. 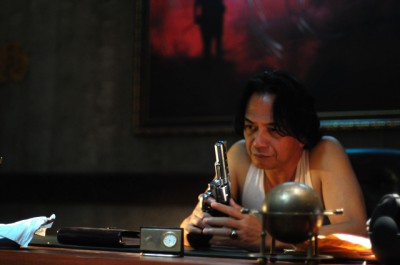 This guy shouldn’t be too hard to take down… right?

There really isn’t anything I can say about the action in The Raid that will do it justice. After a short introduction, the movie goes completely bananas and it is just fight after fight after fight. The cast is ridiculously talented, and just about every fight has one of those unbelievable moments that would make you want to rewind and watch again if you had the DVD. The fights are not just one-on-one either. There are two on one fights, four on one fights, shootouts, stealth kills and much more. The variety coupled with the sheer craziness of the action scenes is what makes The Raid so great. If you’re still not convinced, check out the trailer for a small taste of what to expect.

Not only is the action very well done, the various fights are also shot very well. In a lot of action movies, especially super hero movies, I lose track of what is happening during some of the fight scenes and at a certain point I’m just watching a rapidly moving screen and not knowing what is going on. The fight sequences in The Raid are filmed in such a way that you can keep track of everything that is going on while still being able to pull off interesting angles and rapidly switching between cameras depending on who is fighting whom. I was never confused about who just got hit, or where people were coming from, and that is impressive because some of the sequences have quite a few people crammed into a small hallway.

The Raid is the best martial arts action movie I have seen in a long time. I went in with high expectations and the movie greatly exceeded them. Despite not having much of a story, the idea of a SWAT team busting an entire apartment building using their martial arts skill and a small arsenal of weapons will immediately draw any action fan in and won’t let go until the credits roll. I am already looking forward to the sequel.