Awash in decades of fantasy and science fiction tropes comes Dark Scavengers, from Psydra Games. An adventure game/RPG mutt, Scavengers sets the player loose against the hordes of competing factions in search of fuel and craftable baubles, offering a multitude of outcomes for each narrative encounter. Is a massive inventory and a script bursting at the seams with geek humor enough to make Dark Scavengers worth scrounging for? Or should this adventure be left buried in the niche junk pile?

Nameless, faceless and stranded in space, the player is picked up by a trio of intergalactic scrap harvesters desperate for a new fuel source to their ship. Immediately drafted into the titular Dark Scavengers, the protagonist is dumped upon a planet beset by warring factions of bandits and assassins, all while a more global threat grows beneath the surface. The narrative in Scavenger is light-hearted and reference rich, albeit feeling smaller in scale than its premise would seem to offer. The final act also falters as a sort of exposition dumb and soft lead into a sequel. But with a humorous barb attached to a vast majority of everything read, the overall quality of the writing lends a buoyant tone that works in the game’s favor (and excuses the very rare typo). Given the game’s dependence on all manner of variant text blurbs, it is very much a saving grace.

Gameplay breaks down to a mixture of basic adventure mechanics played against the branching dialogue trees of an RPG. Broken up 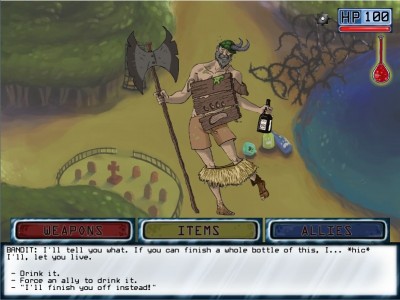 into five chapters of static screens to explore and click-able objects to highlight, some items will lead to narrative events that can bequeath loot or lead to turn-based battles. Loot ranges from side mission relevant single-use items to craft-able paraphernalia. Each member of your crew can re-purpose items into specific battle assets: skeleton archer and defacto leader Kamaho manufactures weapons, green-skinned used car salesman-looking Falsen crafts items, and mute for-copyright-purposes-not-a-Xenomorph Gazer summons allies. The breadth of items that can be created is staggering, especially for a game this size, and is the strongest reason to dive into a New Game Plus +, which helpfully highlights which Scavenger you had craft which item in your previous playthrough.

Battles play out in a Dragon Quest-style UI of front-facing enemy portraits and drop down menus for each of your crafted item categories. That’s where the similarities end, however, as skirmishes are less about competing strategies and move about defending yourself long enough to find the most fun way to demolish your dirt stupid foes. Limited to standard and focused attacks, bosses tend to be the only thing that approaches a challenge, usually simply due to increased strength and health bars. Thankfully most battles can be won on the inside of 1-2 minutes depending on your available inventory, and some are foreshadowed pretty strongly in most dialogue choices as to be avoided entirely.

It’s in item crafting that Dark Scavenger banks its identity on, and for the most part it succeeds. As backhanded a compliment as this is, Scavenger is without a doubt the most effective use of a degrading inventory we’ve ever seen. Everything you make, from swords to shields to soldiers, has a set number of uses before being exhausted. Depleted items will only return at the start of each new chapter, and some circumstances could have items spent in vain. While off-putting in description, the dynamic encourages experimentation with the full extent of your arsenal, adding some much needed strategy to a rather bland battle system. The short length of each chapter also guarantees you won’t have to wait long to sacrifice Red Shirt (actual character) to another obvious trap. 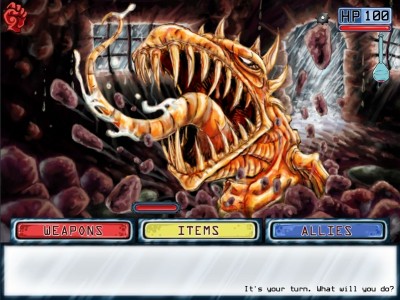 That said, text boxes can only go so far to differentiate your hundredth battle with character portraits. As witty as the description of each action is (with each craftable item coming with multiple unique pieces of battle commentary), the limited visual feedback dampens the enjoyment factor after a few hours. There is a lot of mathematics obviously being processed after all actions, each item and ally come with detailed statistics, but only a handful of iconography and floating text to distinguish between them. The art style does it’s best to stimulate variety, with portraits that boast a detailed and varied swath of personalities, but backgrounds tend to suffer from either muddied palettes or bland environmental detail with few exceptions. Thankfully, much of your time will be spent in more visually distinct overhead exploration screens, spread out in an effective Dungeons and Dragons style grid.

Taking only 3-4 hours to complete, the inherent repetitiveness of clicking on everything, chuckling at its description and your NPC crafter of choice’s response to an item, and finding out how best to manipulate it, is felt well before the start of the third act. Even with encounters paced well within each chapter, the brain tends to lessen their impact by drifting into a habit of simply scrolling through inventory menus. This is especially true for your allies, which are bundled and listed in the same spreadsheet manner as everything else. While making each of the multitude of companions you can recruit into full party members would have been understandably exchaustive, something as simple as a miniature portrait would have gone a long way to distinguish sacrificing your flying draconic monstrosity to a pit from sacrificing your tamed fox creature to the same fate.

Dark Scavenger is a victim of competing niches. The bare bones battle structure and effects library diminish the potential strategy of such a massive inventory, not to mention the mandatory replayability factor for this short of a game. But the branching narrative and expressive artwork largely make at least one playthrough enjoyable. $10 is a steep asking price for a game in a niche within a niche, so a demo is definitely mandatory for all interested players. But for those in such an exclusive wheelhouse, Dark Scavenger provides an amusing excuse to battle with the eccentricities of geek fandom. 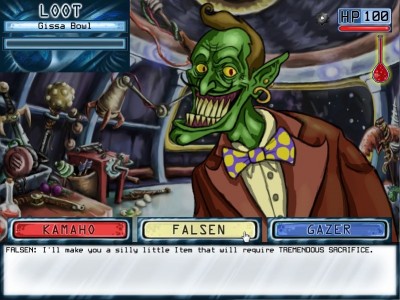 One thought on “Dark Scavenger Review”