Over ten years in the making, everyone’s favorite demon slaying simulator is finally back. Diablo 3 marries the role playing, hack n slash, and dungeon crawler genres into one cohesive and surprisingly lengthy experience. But can a game that has its design philosophy rooted in 1996 still stay relevant among modern gamers? 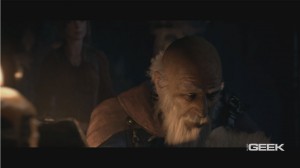 At the offset, players are reintroduced to Deckard Cain as he’s rummaging through some ancient texts in the old Tristram cathedral. Before long a meteor is seen not so coincidentally hurtling towards the earth. Crashing through the cathedral, Cain is lost among the rubble, but his young niece Leah escapes and makes her way back to New Tristram. This is where you come in. Seeing the meteor’s approach, you make your way towards New Tristram in hope of finding evil to slay and innocents to save. As you assist Leah in finding her uncle and cleansing the catacombs beneath the cathedral, the plot unravels. Angels, demons and the fate of the world is on the agenda. It isn’t the most original story ever told, but it stays true to the source material.

While definitely front and center, the story failed to enthrall us. Certain character voices fall into old fantasy RPG clichés, which wouldn’t be too bad if it weren’t for the incredibly predictable plot and narrative of the game. On the plus side, the cinematics ending each act are simply incredible, and a true joy to behold.

Throughout the game you’ll be traveling from one demon infested land to the next, leaving the corpses of countless satanic minions and savage beasts in your wake. Most of the locations and dungeons have very unique designs with color pallets constantly being switched. The dungeons are randomized, meaning that for each playthrough they’ll have vastly different layouts while still keeping the same look and feel. Destructible clutter in the environment disintegrates or explodes as the player attacks, providing some impressive visual flair and a dynamic feel to the environments.

A quintessential hack and slash dungeon crawler, Diablo 3 doesn’t do much to push barriers or innovate. Instead the game focuses on refining the experience we’ve all come to know and love from previous Diablo titles. You play as one of five different character classes, all with unique abilities and play styles. Though every class has a mix of direct and area damage capabilities, they also encompass secondary roles such as support, tanking or crowd control. With the vastly different play styles available in each class, Diablo 3 offers plenty of replayability. 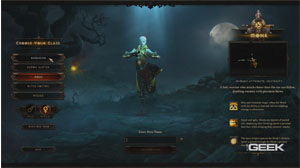 Broken down into five classes, Diablo 3 slightly changes up the character experience compared to Diablos 1 and 2. Each class has six different active abilities and three passive abilities equipped at any given time. Every ability slot is treated as its own progression tree, with four different unlockable abilities, which in turn, have five unlockable runes. A rune is an ability augmenter that changes the nature of the ability, boiling down to extra effects on the ability in question, but more drastic changes also exist. It’s a great system that makes trying out different builds incredibly fun and rewarding.

With all of these shiny new abilities, it comes as no surprise that the forces of evil have decided to meet you head on. Diablo 3 has too many enemy types to count, most of which have very unique character designs and attacks, though some do fill very similar roles. Basic swarmer enemies are easily dealt with by spectacular area of effect attacks while harder special and rare enemies put up more of a challenge. Depending on the class you chose, your first playthrough could end up being disappointingly easy with overpowered attacks and anti-climatic boss fights. Luckily once you reach Nightmare difficulty and beyond that problem disappears and the horrifying yet incredibly satisfying gameplay begins.

It sounds strange to say the defining characteristics of such a big game is the loot, but with Diablo 3 that is undeniably the case. Items improve crucial stats like strength, dexterity, intelligence, vitality and more. Depending on your class you’ll want to heavily focus on one stat in particular, though every stat has a purpose for every class, making hybrid builds an interesting possibility. Some enemies drop a moderate amount of gold or a standard quality weapon or piece of armor. Usually you’ll want to completely ignore these “common” items as they aren’t worth much and take up precious inventory space better reserved for more valuable loot. It’s a carrot and stick mechanic that does a better job than anything of keeping you immersed in the game. 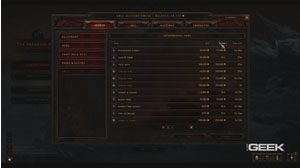 To complement the heavy emphasis on loot, Blizzard has decided to borrow the auction house from World of Warcraft. If you find a “phat piece of loot” that you either don’t need or can’t use yourself you can put it up for auction. Similarly, if you want to give yourself a little boost, you can browse the auction house for upgrades. It’s a very nice addition to the Diablo experience which adds a whole new dimension to the prospect of item farming.

Because Blizzard plans to eventually release a real money version of the auction house, players are required to stay online at all times, even when playing singleplayer. This becomes a problem when Blizzard’s own servers fail, and suddenly accessing the game becomes impossible. This issue has been deeply affecting players already, and we can’t help but fault the game for sacrificing such an important freedom seemingly just for the sake of Blizzard making some quick bucks.

Maxing out your character on the first playthrough is somewhere between very hard and impossible, so players who want to explore the full potential of their class will have ample reason to replay the game. On the harder difficulties players encounter new enemy types while existing enemies display new and tougher abilities. The item drop rate and quality of rare loot is increased. You can, of course, also choose to replay the game as a new character class, though at that point you have to start on normal difficulty again.

Diablo 3 allows you to play through the entire campaign with up to three friends. It uses the real-id system now ingrained in Blizzards battle.net service. It’s a decent system that makes finding friends and joining their adventure a breeze. If you’re light on friends you can also choose to play public games where you’ll be matched with equal level characters from your region. Thus far, player versus player combat isn’t present in the game, which is certainly disappointing, but we’re told it’ll be added later. While we recommend plaything through the game on singleplayer at first, the incredible fun of the synergetic multiplayer combat cannot be overstated.

Diablo 3 is an immensely enjoyable experience that has a level of polish almost extinct in today’s games. Graphically it’s nothing special, but the stylistic art design makes it look incredibly gorgeous none the less. It’s not perfect though, the exclusion of pvp at launch and the requirement of a constant internet connection are definitely big detractors. The storytelling is average at best, but then again it’s hard to fault a game for staying true to its source material. Despite its flaws, Diablo 3 is a game we can easily recommend for purchase. Let the demon slaying begin!