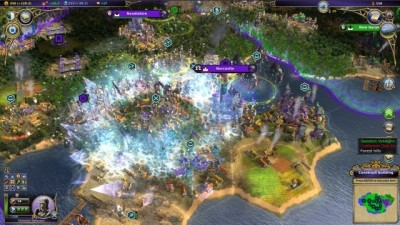 Fans of strategy and fantasy unite! From the publisher Paradox Interactive and developer Ino-Co Plus comes Warlock: Master of the Arcane. Players become a Great Mage, raise armies, and cast powerful spells to conquer the world of Ardaina, from the Majesty series . Fans of Civilization will feel right at home with Warlock. The games share a similar visual set-up as well as style of play.

Warlock is solely a single-player skirmish-mode for the time being with no plot; hopefully with a multiplayer campaign coming soon. Players create a world based on difficulty, world type, world size, additional worlds, and Rival Great Mages. World types vary from super continents to islands all made of hexagon tiles reminiscent of Civilization 5 or Settlers of Catan. Changing the number of additional worlds adds depth to the game, but the additional worlds are full of over-powered creatures. There is no logical reason to travel to the other worlds.
Characteristic of turn-based strategy titles,  players are given a city surrounded by ominous clouds hiding the rest of the world. With John Rhys-Davies as a guide, mages start their quests by researching spells. Spells come in a large variety: healing, unit movement speed, offensive and defensive perks, summoning, and best of all damaging attacks. Who doesn’t love raining fireballs on the cities of infidels? After researching the first spell, the game provides a list of five new spells, and the list seems haphazard at best. Players may research a simple healing spell only to find out that the game then provides a list of all summoning spell, and there is no spell tree to show progression in certain areas.

A city’s economy is based on gold, food, and mana; all things that Civilization fans will be comfortable with. However, cities are able to construct buildings and military units simultaneously, something Civilization fans are not used to. Cities can also make settler units to build new cities. However, settlers in this game are virtually useless as there is never enough room, or the required land type.If farms can be made on lava fields so why can’t cities? In addition, there are special tiles in the game that occasionally fall within a city’s border such as pumpkins, silver, gold, gems, or donkeys. The spaces allow players to build highly superior building that provide copious amounts of mana, food, or gold. 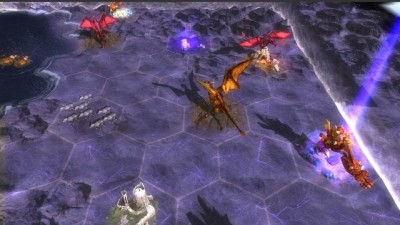 Warlock is battle oriented. Diplomacy is basic at best with options like non-aggression, war, and trade. The AI is extremely hostile, and trading with other mages is minimal. Non-aggression pacts are easily broken by the other mages. Many times the starting city location is surrounded by abounding beast camps. The rate at which monsters appear is random. While fighting lots of monsters may be fun and challenging; if a city’s defense is not in order, it will be ransacked. Fighting units are well designed, and cover a wide spectrum of classes including warriors, archers, mages, shamans, boats, flying boats, bats, werewolves, and minotaur. Each unit comes with its own special abilities in or out of battle. The battle system in Warlock is based on points, attacking and health. Each battle is preceded by predicted outcomes, and battle advantages like hills or forests. This is a fantastic addition to the game and enhances the difficulty. After a unit has been around long enough, or through a few battles they have the opportunity to be upgraded.

Quests are an integral part of the game, which are handed down from advisors or gods. It is highly recommended that you complete the quests as they usually revolve around constructing certain buildings or killing a specific of wild beasts. Advisor quest completion is rewarded with simple things like gold, whereas god quests are rewarded with powerful spells and over-powered units. 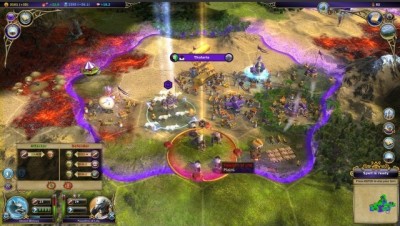 Warlock has no soundtrack to speak of. Instead, the sound effects consist of woodworking, screaming villagers, burning, and units shouting phrases of obedience. The game doesn’t allow players to automate units, which means play can get a little tedious. Despite this, there is a side-screen assistant to organize all the moves in a turn. The interface allows players to see all of the things that need to be done in a turn, making  micromanagement a little more bearable. Movement of units can be restricted by terrain type like mountains or swamps, making the game a little more challenging. Overall, Warlock brings a magical fun to strategy games. Even though there are a few problems with gameplay, and the conquests can take more than 10 hours; the game is a simple pleasure. New gamers to strategy will have no problem picking this game up, and as for the Civ veterans, this is a fun dip into the magical realm of Ardaina, although it wouldn’t be a bad idea to wait for multiplayer game mode.

Name: Warlock: Master of the Arcane