Now that the Diablo III release date has come and gone, the summer gaming lull has officially started. When a gaming lull starts there’s no better time to get through some of your backlog, and when you frequent sites such as Slickdeals, Cheap Ass Gamer, and even Steam, you’re bound to have a decent stockpile of older games. The way “Jesse’s Backlog” works is every couple weeks I give you all a list of a few games I haven’t gotten to yet, and you vote on the one I should play. I play the game for a week or until I beat it, and write about it. Think of it like an informal review. Since this is the first week I picked the game, and this time it is El Shaddai: Ascension of the Metatron. The title’s a mouthful, but I’ll be damned if it isn’t one of the more… interesting games I’ve played. 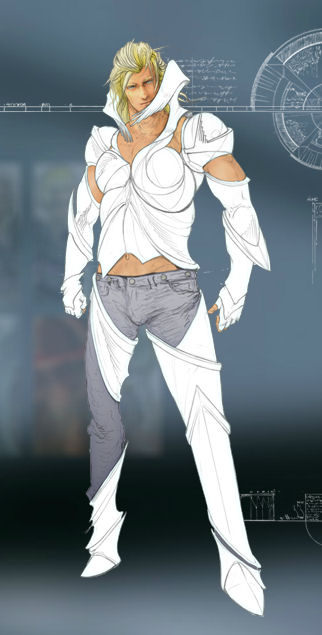 Bowie pulls it off way better

El Shaddai is a 3rd person action game the focuses on platforming and combat. The game seems to be torn on what it wants to be when it grows up because it constantly switches between 2D platforming, 3D platforming, combat heavy sections, and even some driving. The story is based on the Book of Enoch, a biblical story that is absent from most bibles today. Mankind has started worshipping fallen angels called The Watchers instead of God, so God was about to send a giant flood to wipe out mankind as a last resort. A priest named Enoch thought that reaction was a bit unreasonable, so he told God he would go get these fallen angels and bring them back to heaven. God sends Lucifel (pre-Satan days) to assist Enoch by saving your game, but they mostly just talk about you behind your back via cell phone. No, I’m not kidding.

I had been interested in El Shaddai for a while because various review sites were raving about its art style; saying it’s like nothing they have ever seen before. After playing it, I can safely say that they are not wrong. It is very difficult to describe—it’s like you are in one giant fever dream throughout the game. Each level is super stylized, very colorful, and each floor of the tower you’re climbing throughout the game is radically different. On one floor you’re underwater and on another you’re in a futuristic city playing through a much more intense version of FFVII’s “Crazy Motorcycle Chase.” The Watchers themselves sport all black armor with one giant, creepy eye where their faces should be, and Enoch obviously has a handle on fashion with his horribly impractical armor and tight, bulge-accentuating jeans. This isn’t a game you can easily marathon because you get such an eyeful of graphics every time you play. You’ll just have to put the controller down and process the awesome, and at times nightmare inducing imagery, you have just seen. 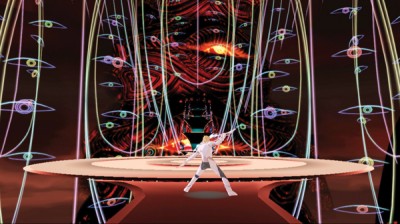 That right there? That’s just a tower of eyeballs. No big deal.

When a game has such an interesting art style it has to have equally interesting music to go along with it. Fortunately, El Shaddai’s soundtrack brings the game to life and is another reason why you have to stop playing at times to avoid sensory overload. The game gives players a well thought out mix tape. This isn’t one of those “we’ve been dating for a week” mix tapes. This soundtrack consists of a full orchestral score complete with a choir in some songs and jumps between epic symphonies with said choir, to more foreboding songs that are low and dark. There are even a few oddballs in there that may or may not be inspired by Michael Jackson. 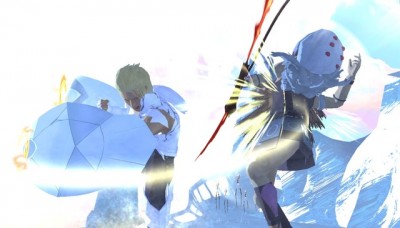 If the Watchers didn’t want to listen to God, there’s no way they’re going to listen to a human priest when he tells them to go back to heaven so their souls can be trapped for eternity. How is Enoch supposed to get them back up there? With God’s heavenly weapons, of course! After the Watchers made it apparent they didn’t want to talk it out, Enoch proceeds to go to their creepy eyeball tower and beat them all into submission with one of three weapons. There is the Arch, which looks like a lightsaber bow, but functions as a sword, the Gale, which is the weak, but long range, and the Veil, which is the one you’re going to use most of the time because it’s badass. The Veil is a giant shield which breaks apart into what are essentially two massive gauntlets exclusively used for face-punching. The combat is a simple version of games like Devil May Cry, and only a few buttons govern your attacks. There are a few strategies like certain weapons working well against others, but odds are if you have the opportunity to use the Veil you will use it because it is the most powerful, the most fun to use, and punching things is always the best solution to any problem.

Is El Shaddai the best of its genre? No. Should you still play it if you get the chance? Absolutely. The game is incredibly unique in terms of the art direction, and it is entertaining as far as action games go. The developers obviously took some liberties with the story because I’m fairly certain that cell phones and designer jeans were not present 14,000 years ago, but it can still get pretty heavy at times. The gameplay is simple, but fun (especially with the hulk hands), and the platforming mostly works with only some minor depth perception issues. The only outstanding problem is the lack of a warning telling you not to play this before you go to sleep, especially if you are sick or on some sort of hallucinogenic substance.

Here comes the fun part. You, yes YOU, will choose what I play from my backlog for the next week. After the article I will list 5 games and all you have to to is select the one you think I should play for the next week via the poll below. The title that has the most votes is the one I will play for the next week, or until I beat it. If there are no votes after a few days, I will pick my own game after being horribly disappointed.

1. SaGa Frontier 2 – I can’t remember exactly when I bought this game. I’m pretty sure it was at a gamestop in my local mall shortly after I got my shiny new PS2. I love the first SaGa Frontier, so I thought “why not?” After playing for a few minutes I put it on the shelf and it has sat there ever since.

2. Suikoden V – I picked this up about a month ago at a local video store that was going out of business. I played Suikoden III a while back and really enjoyed it and it was only five dollars, so I couldn’t resist.

3. Prototype – I played through the second one and the first one is downloaded on my PS3 ready to go.

4. Gears of War 3 – I’ll have to enlist Trevor’s help with this one since we’ve played the other ones together. I don’t know how I still haven’t gotten around to this one.

5. Sin & Punishment Star Successor – I bought this cheap on Amazon and tried to play the first couple levels on normal. It kicked my ass back to playing Muramasa and I haven’t had the opportunity to give it another shot yet.

The voting has officially closed, and the game I’m going to be playing for the next week is Suikoden V. Thanks to everyone who voted!

3 thoughts on “Jesse’s Backlog: El Shaddai: Ascension of the Metatron”