Finishing a huge RPG like Suikoden V in a week is no easy task, and that is why I was not able to do it. However, I was able to get 20 hours in, and after the first few hours of introduction that comes packaged with most RPGs, I really started to enjoy this game. In fact, I think I’m going to go play some more right now. 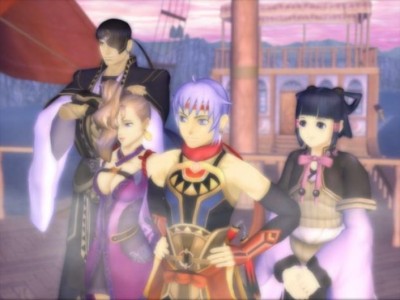 Okay, now where were we? Oh, right. The Suikoden series is famous for the insane amount of characters you can recruit throughout the games and Suikoden V is no different. Throughout the course of the game you can recruit 108 characters to your cause. Some with fight with you, and others will do other tasks like cook, teach and rub your feet after a long day. When you watch the opening video you will think that someone just started going crazy with Windows Movie Maker because still images of characters rapidly flash through the video like a middle school Power Point presentation. After a while your eyes will glaze over and you will accept the fact that you are going to be here for a while.

Suikoden V reminds me of a more tame Game of Thrones. There is corruption, back stabbing, and multiple families at war with each other for control of the country. Only instead of starting out as a badass lord like Ned Stark, you start out as a prince who looks like kind of a wuss. Thankfully, he goes from not being able to do anything by himself to taking on huge responsibilities lightning fast, and the best part is you get to name those responsibilities yourself. In my 20 hour old Suikoden V universe, Prince Jerome resides in Puzzles Castle recruiting people to the Pie Alliance, and I wouldn’t have it any other way. 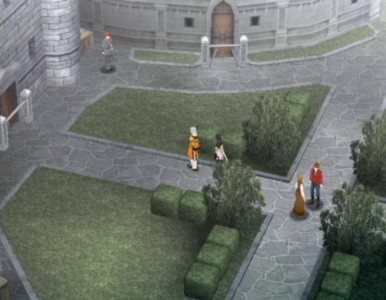 I think we’ve been down this road before. Maybe we should ask for directions.

The first thing you’re probably going to notice about Suikoden V is that it’s huge. Not just because it’s a long game, but because it takes an obscene amount of time to explore just about every town and city you visit. I found myself getting lost looking for a certain shop because I’ve been spoiled by mini maps that have everything conveniently labeled for me. Large areas also roll out the red carpet for some pretty significant load times. You will become very familiar with the loading screen where a sprite of one of the characters walks in place, and you will hate it by the end of the game. On the upside, the locations do look nice for the most part, and the character art is top notch.

Another aspect of the game that takes a hit because of the massive areas you have to explore is the soundtrack. The music itself is not bad, but the songs are a little short and when you’re in an area for 45 minutes or so you are on the verge of losing it because this is the 22nd time the song has looped. The voice acting is also a mixed bag and the only thing I can think of to compare it to is a group of people watching home movies. There is some excellent voice acting, and those are the people who are explaining what their kid is doing in the video to their guests. Then there is the voice acting that sounds bored and tired, and those are the people that are being forced to watch somebody else’s family videos that frankly, they couldn’t care less about. Thankfully you can look past most of the voice acting because the story is strong enough to carry those poor trapped house guests on its back. 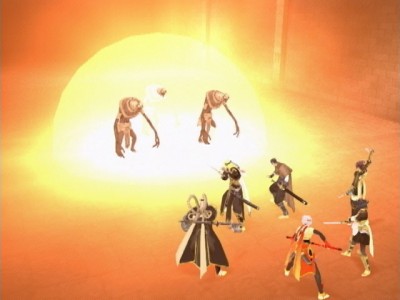 Six against two? I’m okay with this.

Finally, we’re getting to the gameplay. Time to fight some… wait, there’s a cut-scene. Okay that’s done, let’s walk over… another cut-scene. This happens for roughly the first six hours of the game. If I remember correctly when I hit the six hour mark I had been in exactly two fights and my hands were shaking because I wasn’t getting my turn-based fix. Thankfully at the point I’m at now I can freely go fight stuff whenever I want. The main focus is your classic turn-based RPG fighting where your team has different skills, magic, and well, you know the drill. The best part about it is that you can have six characters fighting at once, which has made everything stupid easy so far, and you can collect different formations which give you noticable tactical advantages like attack and defense bonuses. 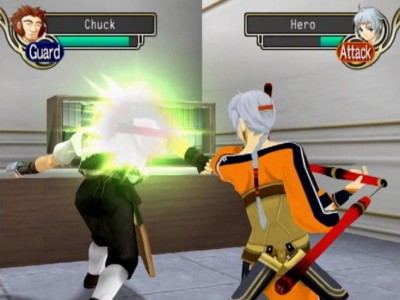 Rock, paper, stick to the face

There are a couple other gameplay elements that like to make sure you know they’re a part of the game too every now and then. The first one is the one-on-one duel. This is like rock, paper, scissors on easy mode because the person you are fighting pretty much tells you what they’re going to do so you can counter with the better option. Then there are the mini RTS battles, which so far have been me selecting my unit and telling it to attack the enemy unit it’s strong against. It’s kind of like that game you play as a kid where you hammer the square peg through the square hole, the circle peg through the circle hole and so on. I can only assume it gets more difficult as the game progresses, so I’m looking forward to using some strategy, even if it is only a small amount.

All that being said, I’m still enjoying my time with Suikoden V. Despite the lengthy introduction, needlessly large areas and plentiful load times, it’s nice to get into a JRPG that doesn’t try to do anything too fancy. The battles are fun, the characters are diverse and odds are you’re going to be involuntarily marathoning entire sections of the game just because you want to see what happens next. If you can tough out the first six or so hours then you are going to be in for an enjoyable experience. Suikoden V is on the more expensive side of last gen gaming, but if you are lucky enough to see it on sale somewhere you should pick it up.

For my next backlog I am choosing five games that I have played before, but not on the system I now have the game on. For example, I have played Banjo-Kazooie on my Nintendo 64, but I never really got around to playing it on my XBOX 360. So without further ado, here they are.

4. Ghostbusters: The Video Game – System I played it on: XBOX 360, system I currently own it for: PS3

5. Star Wars: Knights of the Old Republic – System I played it on: XBOX, system I currently own it for: PC

The voting is now closed and the big winner is Star Wars: Knights of the Old Republic.