It’s difficult to put into words, but it is painful to see a game not live up to your personal aspirations for it. Please don’t be confused, dear viewers, that is not to say that Krater is a poor game. In many ways, Krater is absolutely brimming with awesomeness. But despite its many triumphs, there are still some rather significant setbacks that withhold it from the greatness of its ancestors. The public relations conundrum that Krater faces, and one that we had to recognize and overcome, is that players need to play Krater for what it is, and not instantly try to compare it to its top-down RPG bigger brother that released a few weeks ago, or hope that it’s another Baldur’s Gate game.

Krater is, at its core, a tactical strategy RPG in the same inspirational vein as Baldur’s Gate and Syndicate (the original) with a dash of MMO and Diablo tossed in for good measure. But it is not a Baldur’s Gate clone. And before you judge this book by its cover, it is not a Diablo clone, either. Krater is its own beast, and we’re going to review it that way. 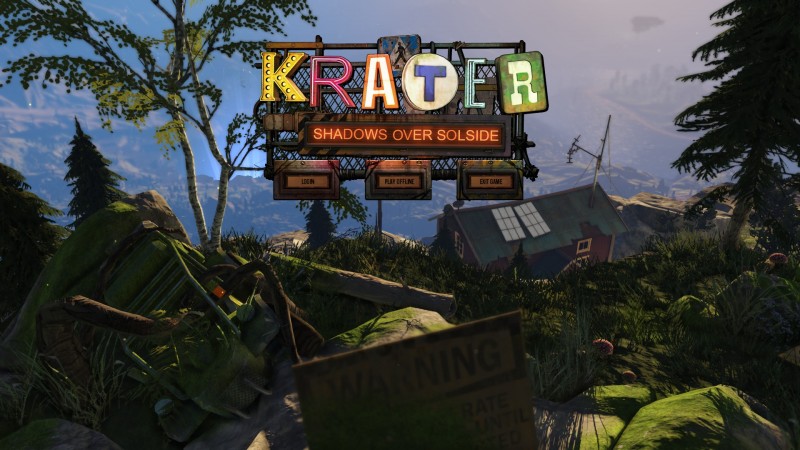 Set in a post-apocalyptic Sweden, players control a team of mercenaries as they travel around the realm of Krater and solve the issues of its denizens. You control a team of 3 mercenaries that you can mix and match from your roster of Bruisers (tanks), Medikus (healers), Regulators (blasters) and Slayers (scrappers). You begin your journey in the small village of Norrmalm and as you grow in strength, you unravel the story and discover more and more small villages complete with their own inhabitants and problems.

The world of Krater is absolutely gorgeous. The game itself is no graphical powerhouse and won’t push the effects of physics or lighting, but the execution of design is nothing short of award worthy. Each town is bubbling with life and rebuilt using the pieces of former bullboards and repurposed road signs. The character design is top notch as well. While almost everyone wears a mask and pair of goggles, they still manage to squeeze out a fair amount of personality.

Enemy interactions happen in two different ways. They either attack you in the form of a random encounter on the world map, of you can go into one of the games many many dungeons and flush them out. Enemies drop salable loot, new weapons, gadgets, skill upgrades, or blueprints to build any of the aforementioned items using material found in the environment. 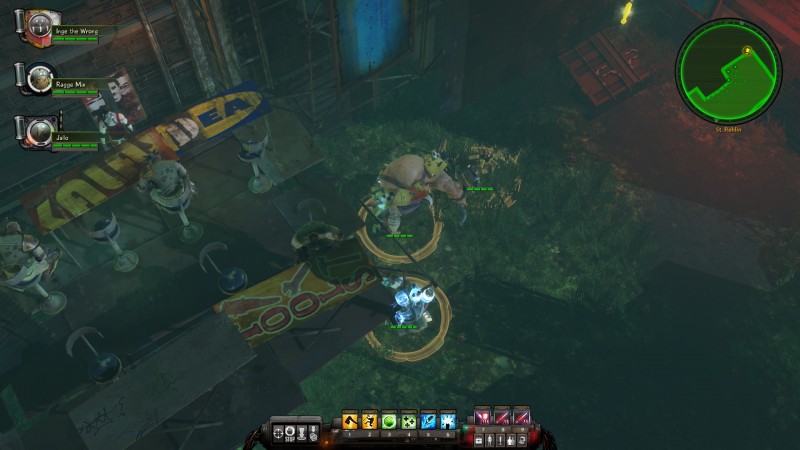 I’m sure someone wanted to make an Ikea joke, but they beat us to the punch.

Your team will attack automatically if a baddie gets too close. Each character has two special abilities that can be continuously reused on a recharging hotbar, just like an MMO. Initially, you’ll only need to use a few skills at a time, but as the game progresses, your fingers will be flying in an orchestra of keyboardy blurs to keep up with the action.

If your characters level up, they will never learn new abilities. But that’s where the interesting twist in Krater’s character progression comes in. Each level, instead of automatically boosting stats, unlocks ability slots in your special moves and within your own character. You can beef your team up with defense and offense buffs, and you can mix and match abilities and test out their effects.

For example, if you put a defense buff into a heal skill, anyone who is healed is also automatically given that defense buff. You can also attach healing or intelligence boosts to attack skills, and so on. And of course, as you travel, you find better and better buffs along the way. It’s a rather clever system that makes for a very personal build of your mercenaries. The number of buffs you can instill into a character depends on your mercenary’s level cap and higher level caps can be found on the more expensive mercenaries.

But the mercenary system is a window to one of the game’s two large issues. First, the story feels detached from the player which is most likely caused by the fact there are no static characters that continually experience the story. There is no “main character” that the events happen to and there is no player-made character to act as your avatar. Essentially, it makes it hard to insert yourself into the experience if you visit different towns using an entirely different set of characters. The story itself isn’t the game’s strong point, and this detachment only exacerbates the issue.

Secondly, the challenge in the game feels unbalanced. For large portions of the game, you’ll breeze through your enemies, while other times you’ll hit an unexpected difficulty wall that will result you in grinding for better gear, even at maximum skill level.

But both of these issues may be overlooked depending on what type of gamer you are. Some people enjoy the grind and others don’t play this type of game for the story. We, on the other hand, wanted to be more attached the story and we don’t particularly care for the grind, either.

But we are happy to see that Fatshark is working incredibly hard at improving the experience every step along the way, showing a level of commitment to their product generally unseen in modern gaming. They’re listening very closely to their active community. For that, we tip our hat to them, and because of it, we’re still excited for “Pledge of the Matriarch.”

Krater is a beautiful, clever, and quirky game that will find its audience, but a few of its flaws will be a permanent hindrance to a good number of players. Considering its bargain price tag and the amount of genuine fun it delivered to us, we can definitely say that if you’re still curious, it’s worth trying.