Max Payne probably judges the quality of his day the same way Ice Cube does: whether or not he needs to employ his Kalashnikov. He’s getting older. His wife and kid are dead. And his liver and kidneys are slowly being destroyed by a tag-team effort of both an alcohol and a pain killer addiction. 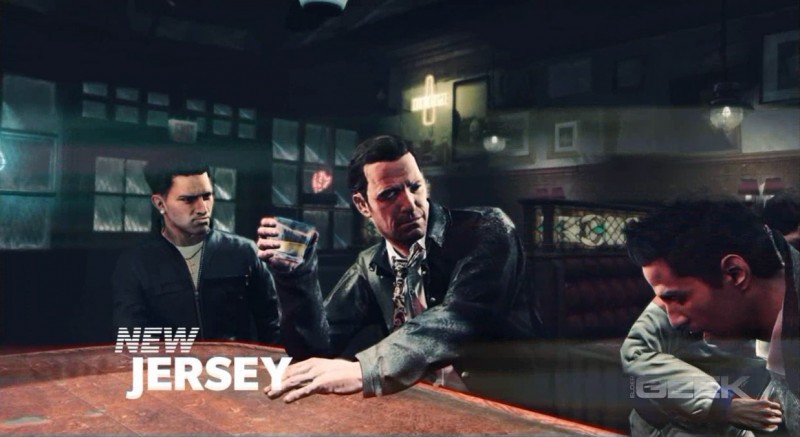 Yes, Max’s pain is our pleasure. Because on bad days he gets to jump through the air in slow motion firing off his iconic twin pistols in the faces of New Jersey’s criminal scum. And while he may wish that someone would just put a bullet into him and end his misery, for the sake of our vicarious enjoyment, we hope he keeps coming back to us with more and more misery.

But it’s been almost 10 years since Max Payne 2 and Max Payne 3 has some rather large expectations to live up to. The 2012 landscape of gaming is almost unrecognizable compared to 2003 and fans have come to know and love a level of expertise from Rockstar Games when it comes to their favorite noir crimefighter.

Max has just about given up with… everything. He’s held up in Hoboken and would rather spend his time at the bottom of a bottle than filling out a job application. With his own family life in absolute shambles, he takes a private protection job for an absurdly wealthy family known as the Broncos. But this time around tragedy doesn’t befall upon Max as much as it does the super-wealthy Bronco family. He does everything within his gun-slinging power to protect every single family member as they start off living on the top of the world and subsequently falling into an absolute hell. 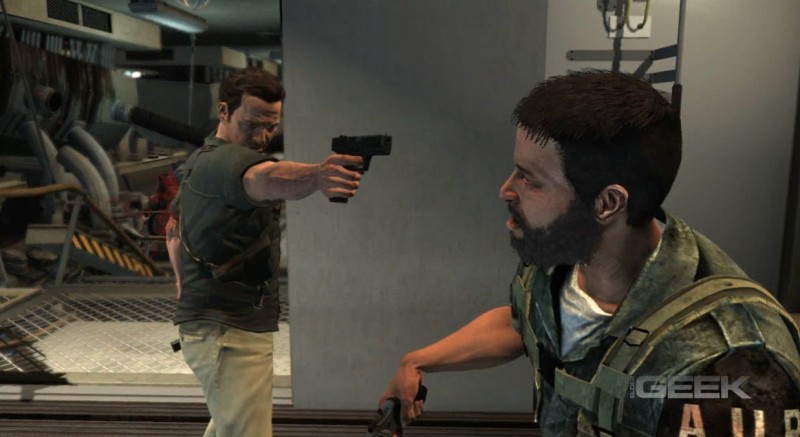 It wouldn’t be a Max Payne game without bullet time, even at point blank range.

We can’t say we loved the story of Max Payne 3. There are entirely too many flash forwards and flashbacks that lead to the present day that lead to flash forwards. It feels too disjointed and unstable for us to say it was “good.” We can’t say it was “poor” either. It was serviceable enough to give you reason to pick up your guns again and play each progressive level. Sam Lake is missing from the writing staff on Max Payne 3, and it definitely shows.

But most people don’t play Max Payne games for the story. They play them for the brutal gameplay with Matrix-esque gunfights. And Max Payne 3 serves up the firefights by the truckload. In terms of 3rd person action, Max Payne delivers a shooting fest that easily rivals anything served up by Nathan Drake or Marcus Fenix, but without their fancy regenerating health.

That’s right, regenerating health is out the window, which might be a first for a AAA 3rd person action shooter this generation, and we’re happy to see it go. Max’s only respite comes from abusing pain meds which can be doled out manually, or they can be administered automatically when your health reaches zero, resulting in a dramatic “last man standing scenario” that we never quite got enough of.

Max goes through a few hair styles in Max Payne 3. He almost looks like Sam Fisher from Conviction.

The single player experience is of average length clocking in around 8 – 10 hours on standard difficulty. Annoyingly, the load times are borderline unbearable. Rockstar realized the gaf and masked the loading times with some decent cutscenes, but end result are long loading times that create unskippable cutscenes. The issue isn’t as problematic upon first playthrough, but subsequent visits to Hoboken and beyond will leave you slamming the skip button without effect, even on Arcade mode.

When you’ve grown tired of the campaign, you can take Max and pals into the multiplayer arena and battle it out in typical online shooter style, complete with bullet time. We’d like to say the multiplayer is groundbreaking, but it’s not. It’s solidly built and moderately satisfying, but does little to expand upon the formula of perks and gunplay.

Depending on which platform you play on, you’ll get a completely different experience of Max Payne 3. Consoles will control Max exactly like John Marston, which only exacerbates the frustration of not having Red Dead Redemption on PC. Out of the box, it works and players can dive into the action in no time.

On PC, gamers will drool at the DX11 polished graphics and the more refined WASD controls, but they run the severe risk of the game not running… at all. In fact, 2 out of 3 editors here at Elder-Geek.com couldn’t get the game to launch beyond the title screen which eventually resulted in this grossly tardy review.

So in the end, Max Payne 3 is a rather mixed bag of good and bad. The gunplay and gameplay are undoubtedly well above average. The story is definitely the weakest of the trilogy as it is a tale more befitting John McClane than Max Payne. The cutscene / load screens are painfully long and feel like they pad the experience too much. The multiplayer gameplay is solid, but won’t renew your faith in online deathmatches. And we can’t help but be irked at the bugginess of the PC version even now a few weeks after the game’s launch. Overall, we can say we had a fun time with Max Payne 3, but $60 is becoming a steep price for shooters, even ones with a Rockstar pedigree. This one is a worth buying if you’re definitely a fan of Max Payne or just 3rd person shooters in general, and only a Worth Trying if you’re new to the series.