People often cry over the loss of adventure games, but the genre has been alive and kicking ever since their glory days in the mid-90s. People just need to know where to look for them, and subsequently, they need to be willing to try them. The Adventure Company, Telltale Games, and Focus Home Interactive have been making them for years.

Daedalic Entertainment, who many will know from the Sam and Max series and who will be publishing the much anticipated Torchlight II, released the latest entry in the Dark Eye series The Chains of Satinav.

The citizens of Andergast are childishly superstitious, and the poor orphan boy Geron is seen as “cursed” by the entire town. Certainly, he has the supernatural ability to break small objects from afar by using his mind and things do tend to fall apart around him, and often times his decisions make matters worse… and…. okay… maybe he is a little cursed. But that doesn’t stop him from being a good person.

The entire city has become infested with an ominous murder of crows that are causing the citizens to fall into nightmares. Geron, being the town’s birdcatcher, uses this as an opportunity to prove himself in the eyes of the king. But the birds are more than just a migrating cluster. They are signs of the return of a long-dead and wicked seer, and ultimately, the end of the world. Geron’s adventure takes him outside the city where he encounters a Fairy girl named Nuri and together they travel with a talking Raven to stop the world from being lost into darkness. 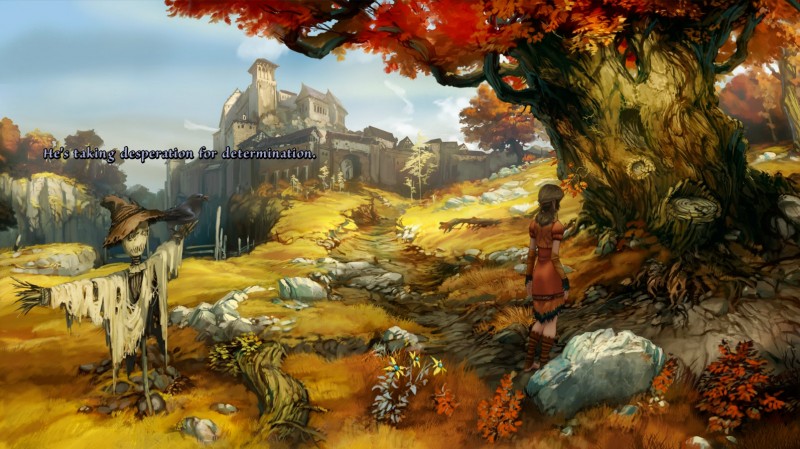 Of course there’s a talking raven.

The storyline is typical fantasy fare, but that’s why we loved it. It was quaint, charming, and held an innocence to it that reminded us of Saturday Morning Cartoon Specials. Chains of Satinav doesn’t have you chopping your enemies to pieces with your broadsword. It doesn’t have you aiming high and center to get your next headshot. It’s simply a tale of a boy and a girl who cling together to help save the world.

For fans of adventure games, Satinav doesn’t stray far from the norm. Left clicking moves your character, picks up objects, and starts discussions with the people around you. You can combine some found objects in your inventory to help solve the game’s puzzles and progress the story. 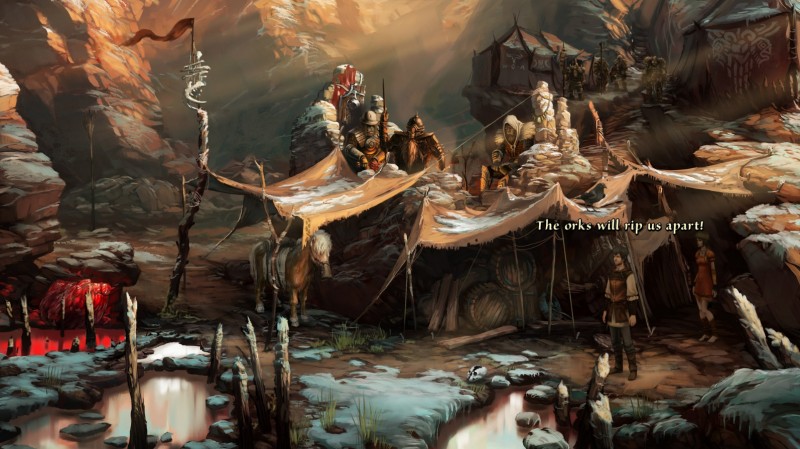 Though it is an adventure game, the danger feels pretty real.

The puzzles weren’t particularly taxing, which we didn’t mind so much. But hardcore adventure fans might find this one too easy. The game does a great job of only supplying objects you need within the near future. There are no odd solutions to the puzzles like “combine rat you just found with shovel you picked up 2 minutes into the game to replace the minute hand on clock to open secret door.” That’s not to say you’ll breeze through it. It’s just that the puzzles and the story are more youth-friendly, which, again, we didn’t mind so much.

In terms of visuals, each set is beautifully decorated with painted fantasy scenes worthy of becoming a desktop background. While gorgeous as still images, the style doesn’t lend itself as well to animation and mouth syncing as a more traditional cartoon would. And though a few voice actors delivered their lines appropriately, others fell short of the mark and created a few wince-worthy moments.

The sound effects are pretty typical for an adventure game and what little soundtrack was present was soothingly fitting for the setting. In fact, we wished there was more of it. 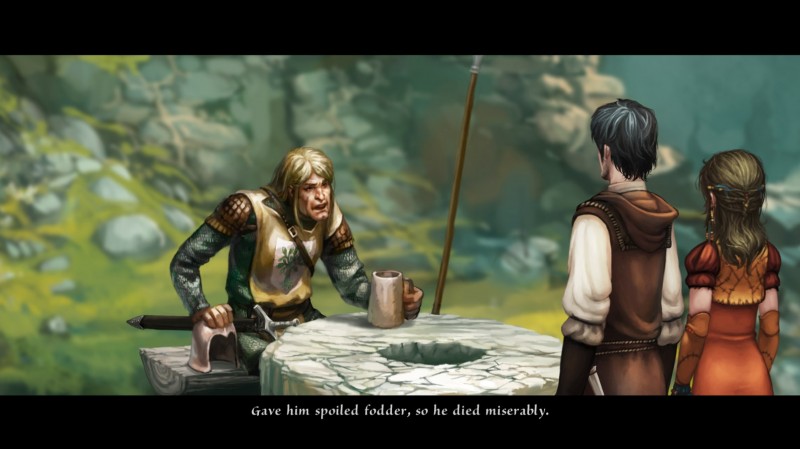 Though the voice acting isn’t the best, each character is unique and memorable.

But aside from our few negative points, we couldn’t help but be won over by Chains of Satinav’s charm. It was a wonderful contrast to the typical games we get to review here at Elder-Geek.com. The characters are all brimming with personality. The lengthy story combined with the game’s puzzles will take you a few evenings to play through. With the cinematic level of imagery, you can either enjoy it alone, or try to solve the puzzles with a loved one. The sincere storyline is appropriate for both the young and the young at heart. For those who miss classic adventure games, Chains of Satinav is worth checking out. When you’re done, you’ll wonder if it’s 1996 again.

One thought on “The Dark Eye – Chains of Satinav Video Review”