Both MMOs and Collectible Card Games have proven to be popular and profitable in their respective sectors, the latter only recently making the successful leap from table top to the video game space as a genre. Combining the two brings to mind a dangerous new flavor of addictive competition, and seems like just the kind of insane challenge we’ve come to expect our indie developers to boldly throw themselves into.

Taking inspiration from an ancient alchemical text of the same name, Forever Interactive’s Visions of Zosimos  seeks to bring to the life that potential peanut butter/chocolate combination hereby known as the MMOCCG. David Staats, Project Lead on Zosimos, recently sat down with Elder Geek to espouse the potential of the new genre, and give us a detailed look at how everything from a homunculus to the Afterlife will fit into digital booster packs.

Elder Geek (EG): Visions of Zosimos  is a unique hybrid, even within this Age of Crossovers. What motivated the decision to mix tactical card game and MMO aesthetics?

David Staats (DS): A lot of the members of our design team have extensive knowledge and history with table top and CCG games, but likewise with MMOs.  We looked at the two and thought, “What if we combined the two ideas together?  What exactly would it be like to play an online collectable card game with people from across all parts of the world?  What if you not just played a regular card game, but could also gain rewards for doing so, and leveled up?”  Looking at the market, we knew nothing like this had been done yet; we want to bring something fresh to both markets.  We didn’t want to just create another World of Warcraft or another Magic: The Gathering, but really push ideas to new realms and see what could be done that hadn’t before.

EG: Did mixing the two genres create any sort of production roadblocks?

DS: Every production has its road blocks – this one is no different.  The biggest hurdle has been the scope of the game.  It has taken a 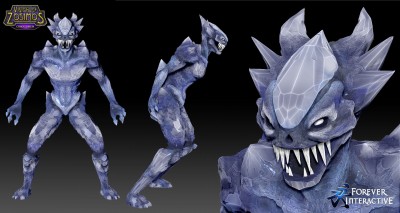 lot of work to figure out the best method to merge the two ideas together into something that is fun and immersive at the same time, and as we figured those features out, the scope of the game inevitably grew larger and larger.  Figuring out what features to launch with and what features to release later has been the biggest challenge.

The engine we were using had also come into play a few different times.  During the course of development, we had a major engine change (due to uncontrollable factors) which essentially put development on hold for about six months while we transitioned everything from one engine to another.  This wasn’t as easy as just copying code and assets over, as the new engine had its own scripting language and asset standardizations that the previous engine did not.

Though changing engines was a hard choice to do, and left us down for a while, ultimately moving to the newer engine was the right move for us.  Our new engine allows us to build the game in real time across the globe.  Due to our virtual nature, this allowed us to amp production up to a quicker rate, and being able to play the game at a more up to date state at any given point and time.

EG: You’ve spoken in the past about taking design inspiration from quite a few sources, but in particular an ancient text not normally drawn upon in games. What is the text and how exactly did it guide Zosimos’ design?

DS: The text is one of the earliest writings in alchemical literature, known as “Visions of Zosimos.”  It was written by a 3rd or 4th century Alchemist by the name Zosimos of Panopolis, in which he details a dream he had.  It was written almost like he had a religious experience – in his dream, he meets Ion, the founder of the Sabian religion.  The dream entails mysticism, self renewal and transmutation – the ending of one phase of life and the beginning of another.  Much like the Phoenix’s death which nurtures the new life, it represents a cycle which begins anew as soon as it ends.

So, the first and most obvious design choice was in the name.  We took the base idea of the story, and really put our own spin on it, creating our own version of Ion – whose motivations for appearing to Zosimos will become much clearer over time.  The core story also allowed us a good reasoning for entering the Afterlife by means of the homunculus, a construct (neither living nor dead) whose creation and composition was first detailed in alchemical literature in the ”Visions of Zosimos” text.  By entering the Afterlife, we can draw upon past warlords, villains and heroes in order to help personalize your homunculus and its play style. 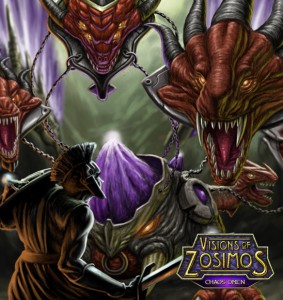 Visions of Zosimos  is based heavily on alchemy, and as such, we have taken the same direction by allowing the player numerous choices in building their homunculus.  It is not a simple “pick and choose” selection, although the process is very user-friendly.  By utilizing alchemy, you manipulate matter, energy and spiritual essence, and in the spirit of those choices, build up your own unique play style based on the homunculus you create.  This can range from a homunculus who is a minion powerhouse, to one that is more versed in spells.  Allowing players to choose the play style they wish to utilize at any given point, and alter that play style, gives them more freedom to explore their own personal desires within the game and not be confined to a specific style all the time.

EG: The afterlife is not a topic often breached in video game stories.  Aside from letting you to draw from a wide variety of dead historical badasses, how does the afterlife factor into Zosimos?

DS: The afterlife is our central stage in Visions of Zosimos.  It’s not just the battlefield, it’s also (ultimately) the prize.  Light and Dark, Order and Chaos, Heaven and Hell, whatever you want to call it – they’ve been at war since time began, each attempting to conquer the other.  But they’re equals and opposites, doomed to a war of attrition for eternity – until we came along.  Humanity is the lynch-pin of this conflict, so both sides are attempting to entice us to join their side by offering us the Afterlife as a prize.  Because the Afterlife is teeming with Soul Energy and Elemental Matter, it’s of particular interest to those who can manipulate those base materials – Alchemists. That’s where our narrative begins, with our players taking on the role of young Alchemy students, pledging their allegiance to Light or to Darkness.  Both sides offer different ways of manipulating and transmuting the energy and matter made available to them – Darkness is aggressive and direct, and the cards associated with Darkness reflect that.  Light is more subtle, utilizing combos and strategy, and has a heavier emphasis on longevity and survival.  Within the story, this is reflected through the creation of Homunculi, a living construct created by Alchemists that can traverse between the land of the living and that of the Afterlife.

EG: Describe your plan for digital booster packs? How many characters will the player begin the game with if not buying any additional packs, and how will trading with other players work?

DS: Each player will be allowed an initial 2 character slots for free.  This allows the players to choose an alignment to either Dark and Light realms, based on where their friends are, or personal preference.  Deck wise, each deck is aligned to a specific element, and each 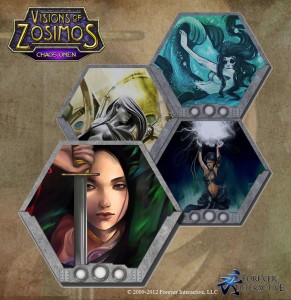 element to a specific realm.  While any card can be used in any deck, certain realm alignments may cause those cards to cost more to play, or have less of an effect.

Every new player will be granted a 60 card starter deck for free.  This allows all players to get in and play without having to spend any money.  Those who wish to further customize their decks can purchase numerous different booster pack types.  A traditional Booster Pack, containing 15 cards, or even Starter Packs, containing 60 cards, will all be available for players to purchase.  These Packs will be elementally tied and Realm tied, allowing player to choose between purchasing more cards for a specific element, or more cards for a specific Realm, consisting of different elements.

We’re working on a system to allow players to trade cards with each other as well, but we can’t really go into further detail about that at this time.

EG: Will digital booster packs play a role in some post-release DLC?

DS: Our plans for post launch are not based so much around DLC, as they are providing continued updates to the game and its story.  We are planning on releasing the game in multiple Phases and Releases as we continue to tell our story, each with new cards, new features and new planes of the Afterlife in which to play in.  Our initial launch will be Release 1, Phase 1, entitled Drums of War, which comes with 4 different elements, each with a 60 card starter deck, and focuses on the history of our universe and details the initial battle between Dark and Light.

EG:  Are there any notable difference between solo and multiplayer play? Are bots substituted for other gamers in the solo campaign?

DS: Visions of Zosimos  is still both an MMO and a CCG, so while we do have plans for solo play, playing with friends and family will be the best way to enjoy the game.  However, we understand there is a desire to get in and learn the game without being completely overrun or shunned by players who might be more experienced in the game than others.

Our single player mode is currently planned to be a slightly friendlier version of our PvEvP world, which involves defeating the afterlife’s creatures.  This will allow the player the opportunity to get a feel for the game before entering a standard PvEvP or PvP area.  We are also planning on allowing players to use the single player game to “test” cards which they may not have in their library, and see which cards they want to work towards obtaining.

EG: And lastly, when can we expect Visions of Zosimos, and on what platforms?

DS: Visions of Zosimos  is currently planned for a Q1 2013 release on the PC.

Visions of Zosimos  is currently in its last week on Kickstarter. More information on the title can be found on the company’s official website.