A long time ago, in a galaxy without a mediocre MMO, Knights of the Old Republic helped put BioWare on the map as well as usher in a new era of moral choices in video games. The appealing thing about KotOR is the fact that it essentially lets you make your own custom Jedi. You can choose your own lightsaber(s), force powers, clothes, and hell, you can even go the uncivilized route and use blasters. KotOR doesn’t care. Most importantly, you can choose whether your Jedi is a light side saint, or a dark side dick. 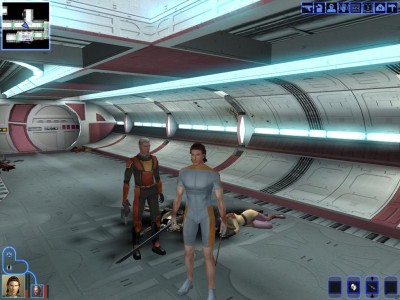 Ok, you have your swords. How about some pants?

Remember Mass Effect? Sure you do. It was that space opera RPG that ended up pissing most of the gaming population off because of its less than desirable ending. KotOR was like the Mass Effect of the last generation, only instead of leaving gamers sad and unfulfilled, it left gamers’ minds blown with a spoiler of “I am your father” like proportions. Well, maybe not that big, but first time players will definitely do a double take.

One look a KotOR and you can tell it’s from last generation, but the areas are so expansive and detailed they end up being more fun to explore than out current gen, HD, graphics filled games. You can explore Tatooine, Kashyyyk, Dantooine and a Sith Academy. Any Star Wars fan who heard this around the game’s release was salivating, and when they found out it would take hours to explore each area they almost soiled themselves. I may or may not be speaking from personal experience. 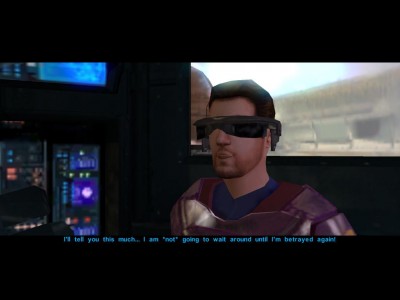 These sunglasses give Carth +6 to douche

I feel like I don’t have to write about the music because it’s the same as every other Star Wars game as well as the movies. Odds are you’ve heard it before. The voice acting however, is an entirely different animal. Everyone in KotOR has at least one speaking line, everyone except you. All you get are clickable dialog choices to voice your agreement, disagreement, or witty banter. That being said, the English (or “Basic”) voice acting in the game is great considering the amount of dialog that had to be recorded. As far as the alien voices go, they left something to be desired. From what I can tell they recorded a handful of alien dialog, split it up, and put it into a randomizer whenever a language other than Basic is spoken. Don’t get me wrong, it’s a good plan. You just notice some holes in the logic of it when an alien is talking for 10-15 seconds and all he’s saying is “that’s nice.”

Like I said before, KotOR is based on the d20 Modern system. This means that your damage, critical change, persuasion, and just about everything else is governed by a virtual dice roll. However, instead of making you learn all of those rules they boot you right into the game and let you fend for yourself. Thankfully they make it easy to figure out which weapon does more damage and what armor is better suited for your character, because half of this game is about killing everything that crosses you and looting their bodies. 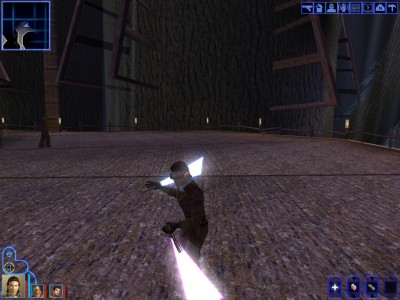 Because dual wielding is always better.

The other half is about talking to people and making the now infamous moral choices. There are a lot of choices you have to make and most of them are either super nice or super nasty. For example, you can give money to someone to help them buy medical supplies, or you can just kill them on the spot because you can. As you make choices your morality meter goes towards the light side or the dark side and you get boosts in certain force powers depending on how much of a dick you feel like being that day.

I’ve always considered light side easy mode because you get force powers that heal you, freeze organic enemies, and destroy droids in a matter of seconds. A few of the dungeons in the game are populated only by droids so that destroy droid power will come in handy. Dark side is pretty cool too though. You get all the standbys like lightning and choke, and you get to make the more entertaining moral choices. Basically what I’m trying to say is that it’s more fun to be an ass in videogames. Most online communities have already proven that.

Most of you have probably already played this game, but if you haven’t you should get on that. Odds are you are a Star Wars fan if you’re reading this, and KotOR is arguably one of the best Star Wars games available. If you have played it before but haven’t played it in years, go play it again. That’s what I just did and I enjoyed it just as much as the first time. Hell, I enjoyed it even more now that I understand the mechanics and I can abuse the system by rerolling persuasions in conversation until I get them. It’s not cheating, it’s using the Force.

This time the theme is “Games I’ve downloaded from the PSN, but never really played.”

1. Dead Nation – This was one of the free ones from the PSN outage fiasco. I played the first level, but never went back.

2. Penny Arcade Adventures: On the Rain-Slick Precipice of Darkness Episode Two – I got both PA games for a couple bucks during a sale. I played the first one a while ago, but the second on remains unplayed.

3. Bionic Commando: Rearmed 2 – I have the first one, so I figured I’d get the second one. I played the first couple levels and moved onto different things.

4. Trine – I heard good things, so I picked it up during a sale. Again, I played a little and just stopped.

5. Pixeljunk Shooter – Pretty much the same as the others. I bought it because it looked interesting, played a tiny bit, and stopped.

The voting is now closed, and the next game rising up from the backlog is Trine.

One thought on “Jesse’s Backlog: Star Wars: Knights of the Old Republic”