For the past couple years I’ve been seeing that little knight icon every time I scroll through the games I’ve downloaded onto my PS3, and every time I see it I think to myself “I should play Trine sometime soon.” Well, thanks to your votes I finally sat down to play it, and after hearing all of the hype for the past few years I was left mostly underwhelmed by the experience. I guess three years of hype will do that to a game, or 15 if you’re Duke Nukem. 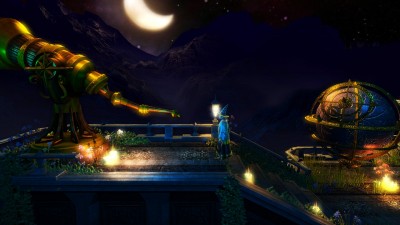 I’m pretty sure he’s using that telescope for something besides stargazing.

Trine is a 2D platformer with puzzles thrown in from time to time. You take control of a thief, a knight and a wizard, but when I played I couldn’t stop myself from seeing Catwoman, a stereotypical dumb meathead, and a perverted old man who can do magic tricks. Each character has different abilities and you have you switch back and forth between them to get through the levels. More often than not I used Catwoman… I mean the thief, to get to where I needed to go because her grapple is so damn useful.

From what I can tell the story of Trine came as more of an afterthought. Not only do you have the painfully standard “warrior, rogue, mage” archetypes that lead you through it, but the story itself is about a dead king who didn’t leave an heir causing political unrest. Of course, that’s the cue for the skeleton army to attack for seemingly no other reason than having nothing better to do that particular weekend. Meanwhile the trio all coincidently touched an artifact at the same time, binding them all together, and it is now their job to reunite that artifact with two others to defeat the skeleton army and release the bind. So in the end, the three pieces of paper that came out of the hat were “dead king,” “undead army,” and “ancient artifact.” Throw in some incest, murder, and deception and you would have your very own Game of Thrones brewing. 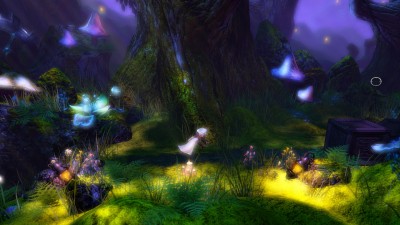 This forest sure gets bright at night.

Trine is a very pretty game. In certain levels you can almost taste the color. My favorite aspect about it is the steam punk design mixed into the fantasy setting. I’m a sucker for cogs and gears no matter how out of place they seem. The only thing that bothers me is the nearly blinding amount of bloom. Thankfully it wasn’t around too often, but there were a couple times when there was an enemy I couldn’t see, or a platform I wasn’t sure I could stand on because it was so damn bright.

While you’re playing Trine, you will be greeted with a soundtrack that sounds very appropriate for the fantasy setting. The voice acting isn’t half bad either, although it seems like the only person who cares about what’s going on in the world is the wizard. He actually points out important things and worries about his party’s well being, while the thief makes snarky remarks and the knight whines about how hungry he is.

There are two aspects of Trine’s gameplay: platforming and combat. I’ll address platforming first because it is the more fun of the two by leaps and bounds. Put the knight on the backburner for a while, because he’s absolutely useless when it comes to jumping and puzzle solving. You’ll be using the thief’s grapple, and the wizard’s ability to create magic shapes you can use as weights and platforms. Who taught this guy magic? 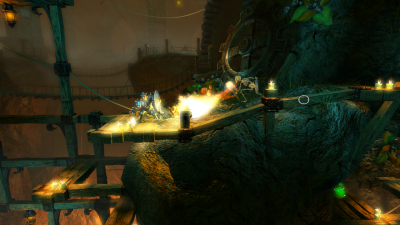 Didn’t I JUST kill you?

The puzzles themselves are almost entirely physics based. I enjoy physics puzzles, but like with any game, the physics can get wonky at times. At first they were fun to figure out, and I felt good when I solved a particularly frustrating section. The problem comes when you see the same platform and puzzle on the next stage. It makes you want to put the controller down, shut the system off and just watch another episode of Storage Wars. Well, that’s what it made me want to do anyway. After a while I just said screw it and grappled my way across some of the platforms just so I didn’t have to deal with them. I’d imagine part of the problem is me playing through the entire game in a couple sittings. Anything can get tiring after seeing it for too long… except Storage Wars.

Do you like fighting skeletons? I sure hope so because aside from the occasional bat and spider it will be skeleton crazy throughout this entire game. This is the time to break out the knight because he’s the only competent fighter until you can power up the thief’s bow later in the game. The combat is simple and pretty fun for a while. It’s basically a side scrolling hack and slash. However, it seems that right when you’re gearing up to do a heavy platforming segment the skeletons want to play a nice little game of Face Stab (patent pending). This results in the knight or the thief effortlessly dispatching skeleton after skeleton spawning out of the same exact spot for a couple minutes until you can get back to the task at hand. It’s kind of like when you want to play with your cat and all it does is sleep, but your bedtime is prime playtime for that damn cat.

In the end, the slow, but steady hype train watered down the Trine experience for me. I wasn’t really sure what to expect, and I think I expected a little too much for what a budget priced, downloadable title can realistically offer. I would still recommend it if you can find it on sale, but I wouldn’t go out of my way to purchase and play it like my life depended on it. I’m looking forward to playing the sequel, but I think I’m all Trine­-ed out for now.

Now that the Steam Summer Sale has ended and my wallet has been abused, I’m going to list five games I bought from there that are relatively new to my backlog.

1. Sideway: New York – It was on sale and I couldn’t resist.

3. The Witcher: Enhanced Edition – It was on sale and I couldn’t resist.

4. Costume Quest – It was on sale and I couldn’t resist.

5. Jade Empire: Special Edition – It went on sale the day after the summer sale ended and I couldn’t resist.

The voting is now closed, and my next game is S.T.A.L.K.E.R.: Shadow of Chernobyl. Thanks to everyone who voted! This poll has received the highest number of votes so far!