I like to imagine that there is a whole division of Square Enix responsible for making up names for their video games that are ridiculously difficult to say in normal conversation. Theatrhythm Final Fantasy joins the impressive list that includes games like 358/2 Days, Dissidia, and its sequel, Dissidia 012 Duodecim.

Celebrating 25 years of Final Fantasy, Theatrhythm balls up over two decades of nostalgia in music form and throws it in your face. Despite how aggressive that statement sounds, it is actually a very enjoyable experience. 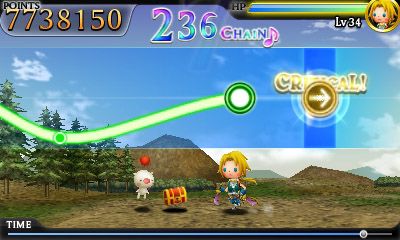 Moogles are very generous in this game

Theatrhythm is a rhythm game for the 3DS that uses the stylus and the touch screen to keep the beat to many of Final Fantasy’s famous songs. Throughout the game you will tap, hold, and slide your way through various battle themes, overworld themes, character themes, etc. while leveling up your chibi Final Fantasy stars. There is no real story to speak of, but in a game like this it’s not a very high priority. Basically Chaos decides to be a jerk and messes with a crystal that controls music, (yes, that exists now) so it’s up to Cosmos to get her dream team together to fix it. I bet you didn’t know that every main character in Final Fantasy is musically inclined.

I’m still on the fence on whether the art style comes off as charming or creepy to me. On one hand, all of the characters and monsters have been transformed into cool chibi versions of themselves. On the other hand, when you take a closer look at the main cast, none of them show emotion and they all have cold, dead eyes. Mild creepiness aside, the overall art style looks great and it can get very nostalgic when they start showing videos from the various Final Fantasy games during some of the songs. The 3D effect is kind of nice because it brings the focus to the rhythm cues by bringing them forward and pushing the background back, but after playing a few songs with it on I turned it off so I could play longer without having to charge my 3DS. 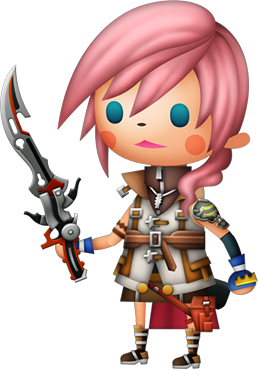 She can see into your soul

Obviously, the music is the main focus in Theatrhythm. Some of the best tunes in the series show up in the game, and there is more coming via DLC. Since the speakers on the 3DS aren’t the best, you will want to plug in some headphones to get the most out of this game. There are a few duds in the mix, but overall the songs in the game are some of the best the series has to offer.

On the surface the gameplay is simple. You watch the top screen for the cues to tap, hold or slide the stylus and you tap the bottom screen anywhere while keeping the beat to the music. There are three main game types: field, battle and event. Field sequences show a character walking and occasionally getting items from moogles, battle sequences show the classic battle formation found in Final Fantasy titles before FFVII, and event sequences show a series of videos and gameplay sequences from a specific Final Fantasy game. All three types are very fun to watch and play, and there are three levels of difficulty so if you are a perfectionist you will be busy for a while.

It wouldn’t feel right calling Theatrhythm a Final Fantasy game without some RPG elements. Thankfully, those are present and accounted for. The characters you choose level up as you play and gain new abilities that do things like buff their stats or allow them to cast spells during battle sequences. I was surprised at how much they impacted the game. For example, Zidane has high agility so he can make it really far in the field stages. Meanwhile, Cecil’s agility isn’t as high probably because he’s weighed down by so much righteousness, so he won’t get as far no matter how well you do on the song. 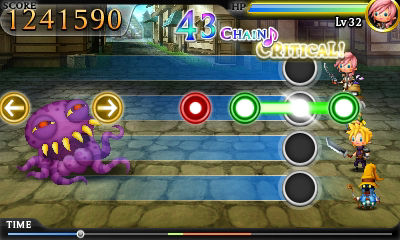 The stats really come into play on the “dark note” stages, which consist of a randomly generated field sequence and battle sequence. How far you get in the field sequence determines what boss you will fight during the battle, and defeating the boss will more often than not make him drop a rare item which can help a character learn a skill or unlock a new character. The dark notes are turning out to be my favorite part of the game because they get more difficult as your characters level and you never know what you’re going to get. However, sometimes the randomizer doesn’t shuffle so well, and if I have to play the battle theme from FFII one more time I’m going to scream.

If you’re a Final Fantasy fan looking to relive the glory days (and not so glorious days) of the series, Theatrhythm is the game for you. It’s one of those games you can play for hours, or just pick it up for a song or two, and the different stages and multiple difficulty levels make sure you will never get tired of playing the songs. The only person I wouldn’t recommend this game to is someone who has never played a Final Fantasy game because Theatrhythm is all about fan service and someone who isn’t a fan just won’t appreciate the music as much.