It’s not often we say this in our first line of a video review, but Darksiders 2 easily surpassed our expectations. It is, without a doubt, one of the finest games of 2012 and it came out at the perfect time to cure the ailments of the late summer gaming lull. Here’s hoping no one forgets about Darksiders 2 during the holiday season, because this title should be up for some game of the year awards in at least one category.

Set within the realms of angels, demons, humans and everywhere else in between heaven and hell, Darksiders 2 puts the story of the Apocalyptic Horseman War on hiatus and begins the adventure of the Horsemen Death. War is being held for the crimes he has committed within the original Darksiders, and Death is tearing metaphysical worlds apart to clear his brother’s name. While it is not necessary to play the original to follow the storyline, we can recommend it. It does add to the experience of Darksiders 2. And if you haven’t given it a chance yet, it’s never too late to pick it up at a discounted price.

The story is passable, but it’s nothing to get super excited about. Each encounter with a quest giver breaks down with Death asking for something to further his adventure, and the quest giver sends Death to three corners of the world before passing him along to the next quest giver. Later and repeat. The voice acting is very good, but the dialogue will get predictable because of this pattern of quest administration. But if you want to pay attention to what each person is saying, it gets fairly interesting seeing the meta-physi-political relationships between angels, demons, and other non-humans. 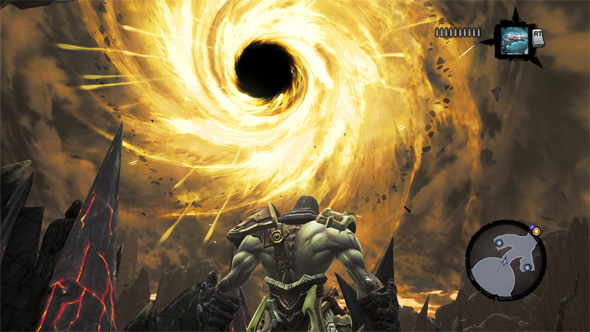 But we’ve seen this story formula in dozens of other video games before it. Instead of saving Princess Zelda and the kingdom from Ganon and unlocking the power of the Triforce, you’re rescuing War and the realms of angels and demons from Corruption and unlocking the Tree of Life. It is a mirror image of a Zelda storyline. That’s not a complaint, because as a story structure for a video game goes, it works.

The gameplay is a hybrid of at least half a dozen other video games, making Darksiders 2 a chimera action adventure game. And while some may say,“Darksiders 2 rips off Game X.” That’s a terrible way of looking at it. That’s like complaining that your significant other looks too much like a world famous model. But allow us to break down the comparisons for you so you know exactly what to expect from this epic adventure.

Darksiders 2’s battle system is like God of War. It has the platforming controls of the Tomb Raider series and the Prince of Persia series. It has a loot and experience system like the Diablo series. It has dungeon systems built like the Legend of Zelda series. And believe it or not, but inspirations from Gears of War, Shadow of the Colossus, Devil May Cry, Portal, and Castlevania: Lords of Shadow can be found here. Darksiders 2 stands on the shoulders of all these great games, melds all their styles into one, and it does it with aplomb.

Each of the many dungeons provide a very meaty gaming experience. They balance combat and puzzles very well. The combat starts off easy enough, but by the end, your screen will become a flurry of attacks, dodges, spells and will put your beat-em-up reflexes through the gauntlet even on Normal mode. 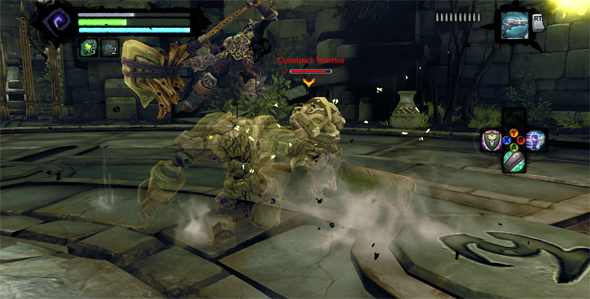 You equip two weapons at any given time, your scythe and a secondary weapon of your choice. Most enemy encounters will require you to time your two attacks with proper dodges or blocks to live to fight another day. The magic system is handled a little differently. You assign the magic to the left bumper and a face button of your choice which makes for a very awkward and unnatural finger combination to pull off in the heat of a 20-skeleton battle. We wish there we could think of something better, but considering the sheer number of skills you acquire along the way, it’s also difficult to think of an alternative.

Darksiders 2 is quite challenging and beating it on normal unlocks New Game +, along with nightmare mode so you can further expand your skill tree.

The platform puzzles within Darksiders 2 will leave you scratching your noodle for a while. Pressure plates and switches need to be manned in proper order on the proper floor, sometimes by yourself, sometimes while coordinating 2 other spirits, sometimes while playing catch with a split-soul version of yourself through portals in the wall. Add a healthy dose of Prince of Persia wall antics, and you have yourself a winning dungeon combination. The entire experience gets intense, but that’s why we loved it.

The music is absolutely fantastic as one would expect from Jesper Kyd. Kyd’s tracks enhance the experience, immersing you deep within the battle for souls. Spiritually, the soundtrack sounds like a mix of Assassin’s Creed 2 with Diablo 2, which is a perfect marriage for the game’s wonderful platforming and macabre setting. 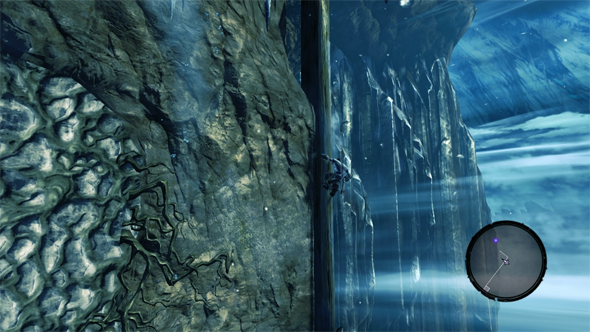 While we can say the game is VERY good, there are a lot of little things that tend to add up to muddle the experience. The combat is enjoyable, but there will be times when entirely too many enemies appear on screen which hinders you from seeing what is going on. When you can’t see what’s going on, cheap shots come into play and during boss fights this can get a bit frustrating when they summon stadiums worth of minions to their aid. We ran into a few glitches where NPCs would be talking, but no words would come out of their mouths and no subtitles would appear on screen. The aiming reticle is slightly high and to the left and on the map screen it says “hit A to toggle the world map.” On PC, you can hit A all day long on your 360 controller and the world map won’t appear. Instead, we found that pressing the left analog stick did the trick.

And two of the biggest annoyances actually happen outside the game. Every time you launch Darksiders 2, it requests that you log into THQ’s social server for the game. For a single player experience… no thank you. No one needs another social club. It’s a brilliant single-player adventure. Nothing else needs to be added to make the game more enjoyable or immersive.

And (this one is a venial sin), the PC version of the game lacks some serious customization options. You can change resolution and little else. But the game is incredibly stable and we ran it at about 110 frames per second even during heavy fighting. Truth be told, we’d rather a stable game with few options, than a buggy game with lots of options. Still… it’s irksome to not have something as simple as anti-aliasing available.

Few annoyances aside there’s no doubt we can recommend this game for full purchase. The main quest clocked us in for 20 hours and that was without touching any side quests. Anyone who has an itch for another Zelda game, another Lara Croft game, another Prince of Persia game, or another God of War game should definitely give Darksiders 2 some heavy consideration. With the world of gaming boiling down to meaningless multiplayer and free-to-play commercial-fests, it warms our hearts to see such care and love put into an absolutely rock solid single-player adventure.