Make a wrong move? You’re shot dead. Take a bad step? You’re being electrocuted or shot up in the air by some crazy invisible thing you didn’t even know existed. Try to hurry through an area? You don’t even want to know. To the untrained eye, S.T.A.L.K.E.R.: Shadow of Chernobyl is a game that likes to screw you over every chance it gets, but when you look closer you can see that it just likes to keep you on your toes. The beauty of S.T.A.L.K.E.R. is that however you view it you will always want to come back for more. Just remember to keep your finger on that quick save button. 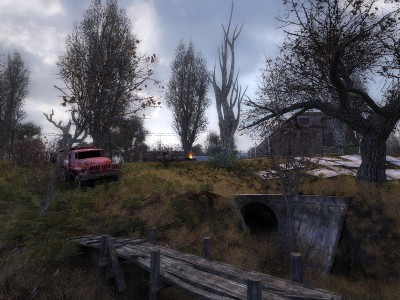 S.T.A.L.K.E.R. is a first person shooter, but you can throw everything you know about Halo and Modern Warfare out the window when you play this game…. damn kids with your ammo around every corner and regenerating health.

S.T.A.L.K.E.R. is a sandbox shooter, and it is about being prepared and frantically scavenging when you’re not prepared. Most modern day shooters give you the “Yeah, I’m awesome and unbeatable!” feeling when you complete a level. S.T.A.L.K.E.R. gives you the “I barely survived that; how am I possibly going to do the next mission?” kind of feeling.

You play as the “Marked One” who is inches from death as the game starts. You are brought back to life, albeit with a little memory loss, and the only thing to guide you are the words “Kill Strelok” in your palm pilot. You are then kicked out into a wonderful radioactive world called “The Zone” and you are mostly left to your own devices as a rookie S.T.A.L.K.E.R., which stands for Scavengers, Trespassers, Adventurers, Loners, Killers, Explorers, and Robbers. However, just about everything wants you dead, and it’s not just guys with guns. The real fun starts when the mutants show up. 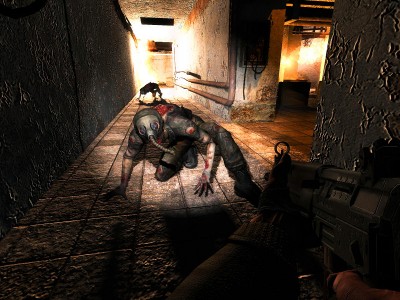 For the first couple of hours I walked around without any real idea of what to do. It was just me, my pistol, and a bunch of dudes who didn’t really seem to want to talk to me. I died on the first mission I was given because I figured a house full of bandits shouldn’t be that hard with a few other guys with me. When my companions didn’t follow me into the house to wipe them out I learned I had to be more tactical in the future. Unfortunately at that time I had more than a few bullets lodged inside my body somewhere. I eventually got into the swing of things, and every part after that was great.

Just about everything you would think of in a survival situation is present in STALKER. Everything has weight, so only take what you need. In addition to talking too many bullets and being mauled by mutants, you can die from hunger, bleeding, and radiation poisoning. You need a steady supply of food, bandages, and antirad medication. Since you’re Russian, vodka also remedies radiation, but only if you drink a lot. 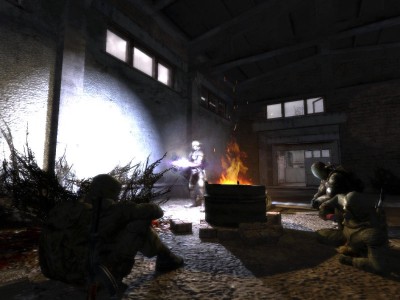 Anybody have any bandages to spare? Someone shot me with a shotgun and now I have a decent size hole in my chest.

Throughout the game you will find, or purchase upgrades to your arsenal. These include guns, better armor, and weird little rocks called artifacts that usually give you a buff in one stat and a debuff in another. On occasion you might run out of ammo and have to scramble to pick up some dead guy’s gun just so you can fend off the rest of the guys trying to kill you.

Sure, you lost your awesome gun, but this only makes the experience that much more immersive. There are times when you will probably bite off a little more than you can chew, and the only thing you can do at that point is backtrack (or reload an old save) and plan better… like Batman.

I played through S.T.A.L.K.E.R. with the “S.T.A.L.K.E.R. Complete Mod” which gives the game a graphical overhaul, bug fixes, weather effects, and much more. The game itself looks great, and there is a seemingly endless amount of things to explore.

There is also a level of creepiness to it. Since there is no background music and all you have are some sound effects, it really makes you feel completely alone once you are out in the Zone. If you haven’t played it before, you can’t understand what I mean until you hit the tunnels for the first time.

There isn’t a whole lot of music other than the other S.T.A.L.K.E.R.s playing the guitar or the harmonica. The voice acting in the game is great though. Of course, everything sounds better with a Russian accent.

If you’re looking for a shooter that you can mindlessly play through in a weekend, S.T.A.L.K.E.R. is not your game. Since S.T.A.L.K.E.R. is basically a survival situation, you have to keep your wits about you to make it. There were times when I was so invested in the game I wouldn’t look away from the computer screen for hours, and that was without headphones. S.T.A.L.K.E.R. will drain you mentally and emotionally, so if you’re up for that as well as a great adventure, check this game out.

Since summer is almost over I’ll probably only have time for one more backlog before the fall and holiday games hit. For my last backlog of the summer I’m going to play a game that will always be on my list no matter how many times I play it. Thanks to everyone who voted on the previous polls!