Nippon Ichi Software is well known for its JRPG and strategy titles that usually bear ridiculously strange names. These games have somewhat of a cult following, and it seems like NIS is trying to change that with Legasista. While the name is still a little strange, the game itself harks back to old school dungeon crawlers and it is relatively easy to just pick up and play. Yes, it is still as anime as ever, but even if you’re not overly fond of the art style, you might want to give Legasista a shot if you’re a fan of action RPGs. 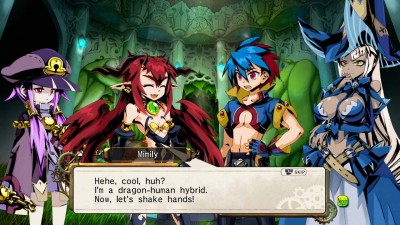 You won’t find any turn based battles here. Legasista is an action RPG and plays similar to games like Secret of Mana, or even the top-down Legend of Zelda titles. While it might seem simple at first, the game will keep nudging you in the side like that annoying friend at the movies saying, “Hey, did you know you can do this too?” The game is very customizable, and that might not necessarily be a good thing.

In Legasista you play as Alto, a young explorer with blue, spiky hair that is trying to save his sister who was cursed and turned into a crystal. He lives in a world where science and technology have been deemed witchcraft, and he has to explore an old research lab so overgrown with ivy that people just call it “The Ivy Tower” to find an ancient relic and cure his sister. Along the way, he meets a very interesting cast of characters, including a well-endowed witch, a half-human half-dragon, and talking bean sprouts. Yes, talking bean sprouts. The story itself is quite repetitive, and you might find yourself glossing over some of the cut-scenes between dungeons because you’ve already seen it a few times before.

The dungeon crawling aspect of Legasista is fun in small to medium doses. The dungeons in the story mode start off super easy to the point where you can just go in, kill everything and head for the exit in no time. As you get farther on you have to be a little more careful about where you step, especially since you have a limited line of sight. Enemies are more powerful, there are more traps you can trigger on the ground, and you will die if you try and rush. Trolling through dungeons can get a little repetitive, so marathon sessions aren’t recommended. If you play for an hour or two at a time you’ll enjoy the game much more.

To spice things up, you unlock random dungeons called “Ran-geons” when you progress far enough in the story. These are the multi floor dungeons where you will probably spend most of your time leveling up. They can start off easy, but as you go through the gates to the next floor you’re never sure what to expect. The gates come in different varieties and some will increase the drop rate of items, some will increase the probability of getting good loot, and some will increase the level of the monsters. The gates are random on every floor, so there’s a definite luck factor with these dungeons. Ran-geons get addicting because you’re always trying to get to that next floor. 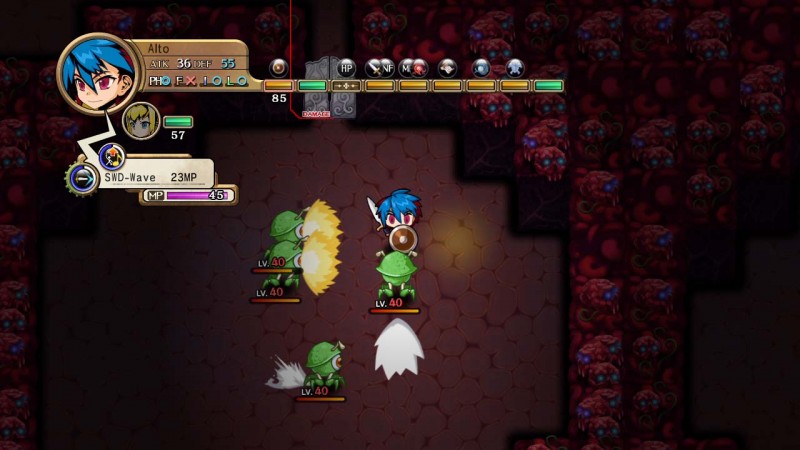 Your equipment acts as part of your health bar. As you get hit your equipment breaks, but it gets restored in between dungeons.

Another thing you unlock as you progress in the game is different customization options. These range from equipment, to character appearance, and everything in between. The equipment menu is a bit of a mess. Most of the equipment have seemingly random names, so you have to go through everything to see exactly what they do. You can also discard older equipment, take their power-ups and put those buffs on your stronger stuff. It is all pretty difficult to keep track of, and if you don’t manage it regularly it can get pretty overwhelming. 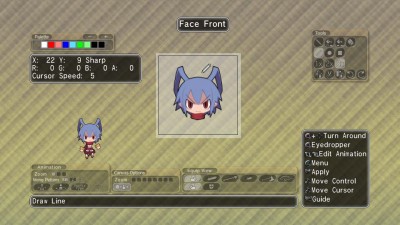 I want to make my own character, but I’d go crazy trying.

The characters themselves are also customizable. In addition to changing your characters’ jobs, they also have jobs within jobs. Each sub-job has different attributes and can be used for different play styles and scenarios. You can also make brand new characters if you hate all of the ones that go along with the story. You can pick a pre-defined model, or draw your own from scratch. If you have the patience and an artistic touch you can make a sprite of whatever character you want.

Legasista won’t overly impress you with its graphics, but it doesn’t look bad by any means. The dungeons can get a little bland after a while, but the characters are all well done, and there is a decent variety when it comes to enemies, even though there are palette swaps galore. While some enemies are pretty simple, others actually look really cool. The static cut-scenes are also back, and those are a little disappointing since the characters don’t have many different poses. It’s hard to convey emotion when you’re standing perfectly still.

Be prepared to do plenty of reading when cut-scenes roll around because the entire voice track is in Japanese. All in all it’s not that bad, and if they tried to match up English voices to some of those characters the results would probably be cringe worthy. The soundtrack is catchy as hell though. You’ll be drawn in right from the opening song.

While this game still isn’t for everybody, Legasista opens itself up to a broader audience. The dungeon crawling is addicting, and a little tedious if played for an extended period of time. The customization options can be mind boggling at times, but you don’t have to use all of them to the fullest if you just want to sit down and enjoy the game. Legasista is definitely worth playing, but the repetitive nature of the story and gameplay keeps it from being great.