The Tokyo Midtown Presentation honoring the pioneering stealth action franchise packed some surprising announcements, as well as a bit of fun at the expense of the assembled press and gaming luminaries like ex-Team Ico lead Fumito Ueda and Grasshopper Manufacture’s Goichi Soda (all of whom were forbidden to photograph or otherwise document the showcase). Beginning with a praise-filled speech from Konami CEO Fumiaki Tanaka, series lead Hideo Kojima took to the stage to introduce a retrospective presentation of the Metal Gear series.

After discussing the franchise’s innovation in video game trailers, Kojima segued into a confirmation of a Metal Gear Solid film under the production of Columbia Pictures and Avi Arad, whom you will remember as the name next to Stan Lee’s on the credits for every Marvel film released in the last five years (as well as the driving force behind the upcoming Pac Man TV series). Arad took the stage to declare his fervor for the project, and promised to take the time needed to get this film right. He also stated that video games could be the next comic books in terms of successful transitions to cinema. 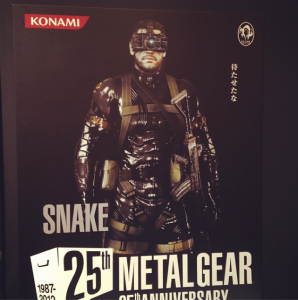 One of the promotional posters at the MGS 25th Anniversary Showcase

Metal Gear Solid: Social Ops, a new Unity-based 3D mobile game from GREE, then debuted with a trailer and the promise of either an Autumn or Winter release in Japan. The game was reportedly inspired by the success of the equally portable Peace Walker on the PSP, and will be playable at the upcoming Tokyo Game Show. A new Metal Gear Rising: Revengeance trailer was also shown, hinting at the return of a notable female character from the series’ past installments. A gameplay demo then pitted cyberninja protagonist Raiden against a Metal Gear RAY unit.

In a bit of a joke, long-time franchise producer Ken Imaizumi came onto the stage to reveal the supposed last of four major announcements to be a line of Metal Gear Solid branded merchandise. Items shown off included a Seiko watch based on Revengeance from Shinkawa; a Foxhound-themed iPhone case from Swarovski; a Uniqlo clothing line; action figures; toys and peripheral such pins, keychains, lunch boxes, phone straps, and hats; a collection of official game soundtracks; and an official book companion to the franchise with 800 pages of art and scenario information (with a special case). Kojima then ended the tease by returning to the stage to give the showcase’s true closer.

In a gameplay demo reportedly moving seamlessly from cut-scenes to gameplay, an unspecified Snake character moved around a base during a rainy night picking off those eternally hapless guards. Demonstrated on a current gen PC and utilized Kojima’s fabled FOX engine, what was eventually revealed to be Metal Gear Solid: Ground Zeroes will take the franchise into the open world. No other information was provided, but given that the game has yet to have its official reveal outside of the presentation showcase, expect more information very soon.