In 2009, Runic Games created Torchlight, an action RPG originally released for PC and later for the Xbox 360 and Playstation 3. Joined by Max and Eric Schaefer, the co-creators of Diablo and Diablo 2, the team behind Torchlight created an exciting game, but one that wasn’t without its flaws. Three years later, the team at Runic have created another entry in the Torchlight saga. Does this sophomore effort address the complaints levelled against its predecessor? 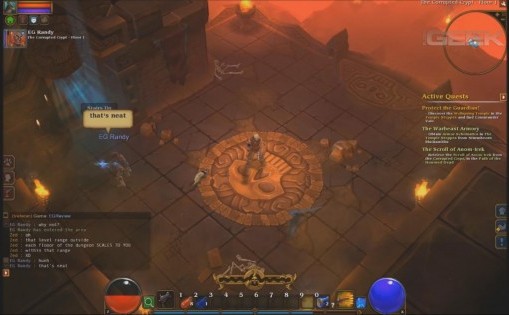 Torchlight 2, like its older brother, is a top-down action RPG. Your adventure takes you from town to town, seeking quests to pursue in the game’s overworld and its many dungeons. You can upgrade your character’s skills and attributes, equip a mind-boggling array of loot on both you and your pet, and fight massive hordes of monsters. The fighting is fast and frantic, and the game moves from dungeon to dungeon smoothly.

Torchlight 2 lets you pick from four classes – each of which is distinct from the three classes in the original Torchlight. The Engineer has area of effect damage, defensive abilities, and robotic minions. The Outlander relies on ranged weaponry, debilitating curses, and damaging spells. The Berzerker has damaging melee abilities, can use ice to slow enemies, and can call upon the aspect of the wolf to aid in battle. Finally, the Embermage uses fire, ice, and lightning spells to damage single targets or groups of enemies. We can say they’re all engaging to play. Each class has a charge meter which fills as you land attacks. As it fills, the charge meter may make your spells and attacks more powerful, or it may give you some temporary power up depending on your class. It’s a nice addition to Torchlight 2, since it makes combat more interesting than simply clicking on things until they die. 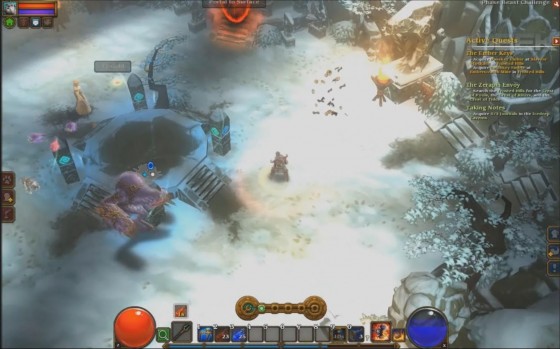 If there was any one, singular flaw with the original Torchlight, it was the lack of co-op gameplay. Needless to say, Torchlight 2 addresses this issue. We have our complaints about the lobby system, namely that you have to create an account with Runic even if you’re playing on Steam. But once you get into the game, you’ll love it. Up to six players can play cooperatively. We’ll say that again: you can have SIX players in your game at once. The thought makes us excited in ways we don’t really understand or care to express. There’s no fighting over loot, since everyone gets their own item drops. Communicating with your team is another matter, since there’s no in-game voice chat. In this sort of game, typing out messages to your teammates isn’t really an option.

That isn’t to say that the single player mode isn’t an option. Runic Games have done everything they can to make Torchlight 2 a fun game whether you’re playing solo or rolling with five friends. Each area has new enemies and looks distinct from the previous locales, so the campaign doesn’t get stale. There’s a good amount of content – if we had to put a number on it, we’d say the campaign will last you around 15 hours. The game has great replay value too, since each class can be built in a number of different ways. 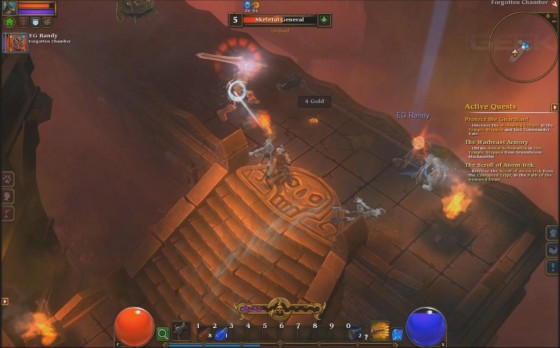 Torchlight 2 has numerous features which aren’t really selling points, but which make the game so enjoyable to play. You can get armor sets even at the earliest stages of the game. You can choose quest rewards to fit whatever items you may need. Gems can be destroyed to make room in socketed items, and items can be destroyed to recover the gems inside. Each dungeon is assigned a range of levels, and will scale to your level within that range. These design points really distinguish Torchlight 2 from its competitors. Though we’re not sure why Runic let you respec skill points, but limit it to the last three points you spent. You can experiment given that window of three points, but not to the extent we’d like.

Torchlight 2 is the ideal sequel. It’s not a perfect game – the clunky server system and lack of in-game voice chat hold it back – but the major flaws with the original Torchlight were all addressed. We can’t level any complaints against the gameplay, other than the Outlander class being a little underpowered. Honestly, we hope Runic takes this game even further with expansions or DLC. We just want MORE. More classes, more items, more enemies, and more Torchlight. Congratulations, Runic – you’ve made a monster. We at Elder-Geek give Torchlight 2 a ‘Worth Buying’, and our Editor’s Choice award.