Geeks from the 80s will remember the original Carrier Command developed by Realtime Games for the Amiga and Atari ST, which improved 3D fluidity previously unseen at the time. Czech developer, Bohemia Interactive decided to take this classic from the 80s and give it a new facelift and futuristic storyline. Carrier Command: Gaea Mission is a fusion of first-person shooting and vehicle simulation with real-time strategy similar in style to its 80s ancestor, which involves controlling a futuristic aircraft carrier and conquering an archipelago of over 30 islands, while seeking out the enemy carrier and destroying it.

The game features two modes: Campaign and Strategy. The Campaign mode doubles as a long tutorial by teaching players the basic mechanics of the game, without restricting your actions and allowing you to experience the gameplay. Strategy mode is the custom open-ended sandbox battle mode reminiscent of the original game where you can adjust the parameters of the game from the amount of islands to conquer as well as the strength of the enemy. Players may find this mode more appealing as the tutorial style of the campaign may be slower-paced.

The story in the campaign is pretty straightforward; Gaea Mission takes gamers away from earth and to the futuristic water moon Taurus near the gas planet M35. As a part of the defeated United Earth Coalition you are on a quest to secure fresh water resources from the Asia-Pacific Alliance, which had taken over earth’s last sources and must therefore prevent Taurus from becoming another bastion for the APA.

As noted in the title, players control a carrier that can hold up to eight vehicles: four walrus assault vehicles and four manta fighters. All of these vehicles can be customized with different
attachments and weapons before launch. The carrier also acts as a portable factory and supply base where you can build new units to replace those destroyed in battle as well as new weapons and other equipment from blueprints. 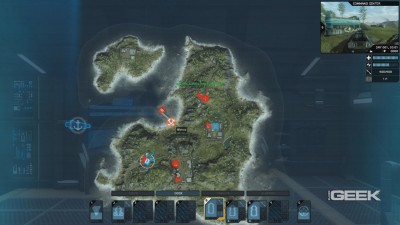 Once units are launched, players have the option of directly controlling them or using the strategic HUD map to monitor progress from the carrier. However, players will find
themselves having to directly control and micromanage units frequently as friendly AI is very spotty and unreliable, especially when you have more units available to command adding to the complexity of the game. This may be a major turnoff for those seeking to use the real-time strategy style of gameplay.

Each island campaign features a series of objectives that must be completed in order to capture the command center, which is key to conquering an island. The battles are constant. With various supply and defensive structures dotting the landscape, players can recharge health, ammo, and fuel. This feature nicely breaks up each operation and prevents them from feeling repetitive, which is a plus.

The 33 individual islands are impressive environmentally. The terrains are wonderfully varied. Gaea Mission also shows off an attractive depth in field, enhanced by day-and-night cycles and changes in weather effects. Each conquered island contains a resource bonus through its infrastructure, improving production rate on the carrier as well as boosting the defense of captured islands.

In addition to the AI, the game has some syncing issues seen in the limited voice-acting within the campaign as well as some graphical delays in the more in-depth environments which features some obvious pop-in. However, these issues have little impact on the gameplay at large, and hopefully will be fixed with a future patch. 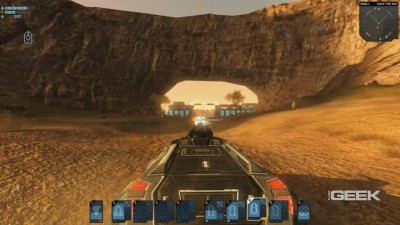 Overall, Carrier Command: Gaea Mission is a game with a nice concept, but jampacked with a few too many bugs, which is particularly prevalent in the AI. For a game that also includes a real-time strategy element, the poor handling of units by the AI when giving orders from the strategic map and resulting need for constant micromanaging makes each battle a tedious operation particularly when there are over 30 islands to conquer. For those wanting to tough out the abysmal AI, the campaign and the battles make for hours of enjoyable gameplay. Hopefully the AI issues will be addressed with an update, and if it comes out soon, the game won’t be a total loss. This one is for strategy nuts only.