Just as we were putting our maces and shields down from War of the Roses, we had to pick them right back up again for Torn Banner’s Chivalry: Medieval Warfare, the first person medieval melee combat game set to bury you waist deep in the limbs of your fallen enemies. Dubbing itself as a first person slasher, the concept is very simple: pick up a weapon and go hurt someone with it. 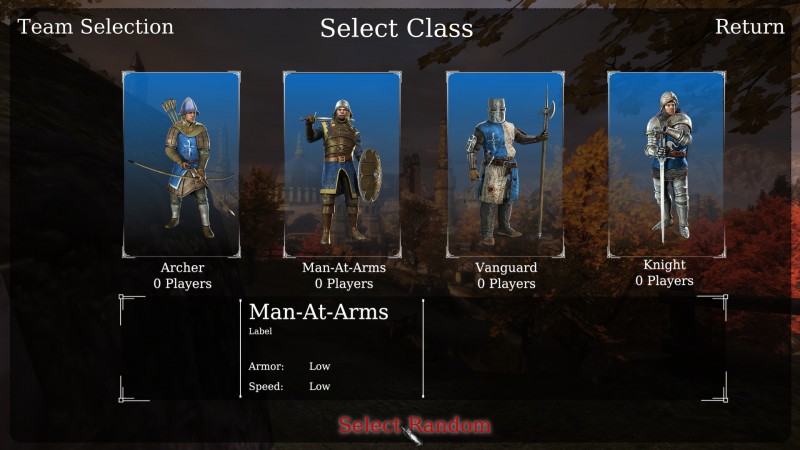 Before each match, players select one of four classes (from light to heavy): archers, man-at-arms, vanguards, or knights, and then choose their weapon loadout based on their overall level. Each class has a nice variety of weapons to choose from including polearms, axes, swords, maces, bows, crossbows, and even javelins. Each weapon has its own weight and style to it. Deadly swings do not happen the moment you click your mouse. The weapons have a wind-up to them, giving Chivalry a pretty decent learning curve.

Melee attacking is broken down into four basic parts. Left clicking slashes horizontally, rocking the mouse wheel up results in a stabbing move, while rocking the mouse wheel down creates an overhead swing. This is the first game we’ve ever encountered that uses the mouse wheel scroll as attack buttons. If you have a 7-button mouse, we recommend remapping. You can block and parry with the right mouse button and the effectiveness of your blocking is semi-directionally based and dependant on the presence and size of your shield.

Players can even dabble with some advanced moves like faking your swing, but considering the hectic nature of the battlefield, they don’t come in handy unless you’re dueling one-on-one. 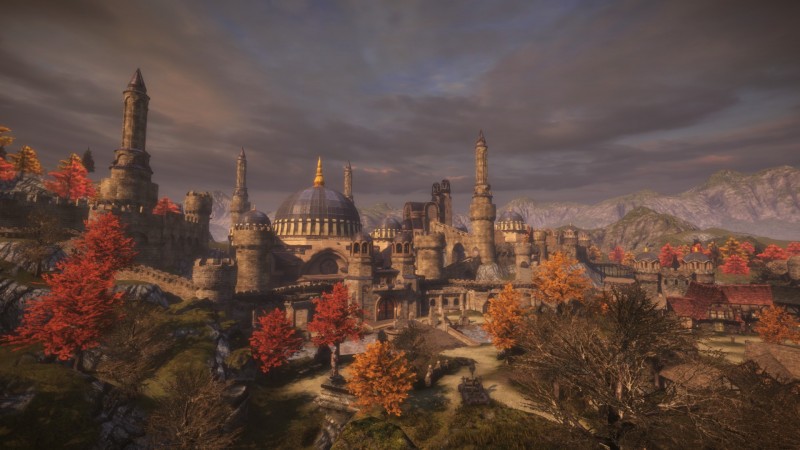 Archery and ranged combat is a different situation altogether, and for the most part, doesn’t feel as fleshed out as its melee counterpart. While the system is more than functional, the bows and crossbows simply don’t have the same weight as the clubs, axes and swords. The reticle is also a little vaguely large which makes aiming difficult. You can follow your arrows’ and spears’ flightpath, however, and that does help with longer distance shots.

The game is incredibly fast-paced, up close, and very personal. You are right in the faces of your enemies as you chop of their limbs, or they chop off yours. Considering it only takes a solid hit or sometimes two to fell your foes, Chivalry can almost be referred to as a twitch-based first person slasher.

Players will find a fairly healthy number of game options available to them in this multiplayer-only fictitious war between the blue Agatha Knights and the red Masons. It offers standard team deathmatch, capture the flag, free-for-all, king of the hill, and a very impressive team objective mode where each side has to work together either capture or defend specific objective points, push siege weapons, or even slay or save entire royal families.

In terms of visuals, Chivalry is all over the place. The characters, environment, and lighting effects are all quite good. The animations are above average, which certainly adds to the believability of the dismemberment of your fellow warriors. When in first person mode, however, some of the weapons lack much needed detail. And the perspective of the weapons is also something we feel could use some refinement. The menu system and character customization options also leave a little to be desired.

Friendly fire is always on in Chivalry which is a point of mixed contention. It’s elating to see an enemy try to chop off your head, only to miss his swing, and kill his ally standing next to him. It forces you to think about your attacks and not just mash the left mouse button. On the other hand, you’ll also run into some blatant team killing. Thankfully there is a kickvote system in place that we’ve seen used more than once. 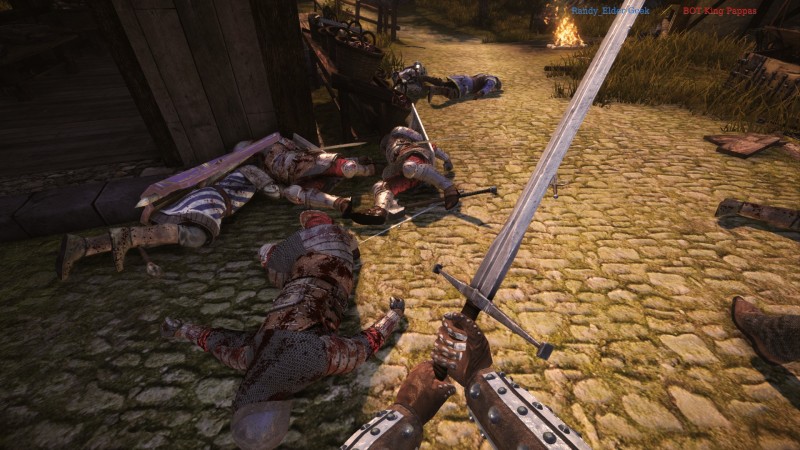 At launch, lag is a serious issue that players need to contend with and because of the incredible pace of the game, we highly recommend finding a server where your ping is below 100. Otherwise, you’ll appear to be swinging through some enemies, while being killed by foes several yards away from you.This issue is likely to work itself out in time as the initial new game surge dies down.

But when you boil it all down, Chivalry is decent game with a pretty high fun factor in spite of its faults. The team cooperation mode adds some much needed direction to the multiplayer, giving gamers something to focus on aside from collecting heads. Along with the ever-present multiplayer-genre-wide issues of balancing, we were less than satisfied with the ranged combat, and we’d love to see a few more maps in the near future too. Chivalry isn’t for everyone. The delayed swings combined with the twitch-based melee might be a turnoff for many. But, if you’ve got a bloodlust that can’t be satisfied with other titles, Chivalry will probably do the trick especially at its budget price. There are few games on the market that are more brutal.