The Notepal I100 is a simple notebook cooler from CoolerMaster which supports laptops of up to 15”. Unlike it’s big brother, the NotePal X3, the I100 is smaller, and does not come with any bells or whistles.
The I100, however, isn’t without it’s advantages. Where the X3 is bulky and visual, the I100 is sleek and subtle. The 100 weighs in at just under one and a half pounds, and with the legs up, is only 1.5 inches tall. All black, and with honeycomb mesh plastic on top, you can see why we say the 100 looks sleek.

For those of you that lean towards the ostentatious, coolermaster also offers this cooler in white green blue black red orange and pink. The underside of cooler looks similar to the X3. There is a handy channel used for wrapping up the usb cable which powers the device.  The leg stands on the 100 are a great improvement from the X3, which had a tendency to fold in on themselves. All four of the “feet” on the 100 have rubber grips, and when the leg stands notch in place, they aren’t going anywhere. The fan is 140mm and is EXTREMELY quiet, adding to the sleek feel of this I100.

While this isn’t a typical gamer accessory, if your gaming laptop also happens to be your work laptop, then the I100 might be worth your consideration. If you want some active cooling without calling attention to your gamer side while in the work environment, this could be the cooler for you. Coolermaster also sells I100 for about 20 bucks, which is a fair deal any day. 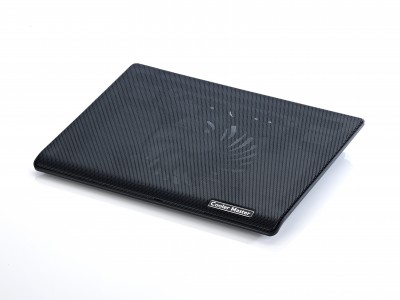