Since it’s Halloween time, I thought I’d roll out a special spooky edition of Jesse’s Backlog with a replay of Eternal Darkness: Sanity’s Requiem. You might be wary of the Silicon Knights logo on the box because of some of their recent games, namely X-men Destiny and Too Human, but don’t be afraid! Back in the day they knew what was up, and games like Blood Omen, Metal Gear Solid: The Twin Snakes, and Eternal Darkness were what was up. Reserve your fear for the game instead, because it will really mess with your head. 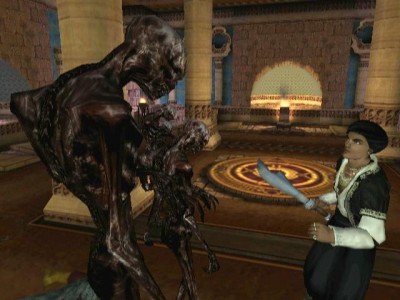 Do you guys know where the bathroom is?

Eternal Darkness is not the kind of game that likes to get you with scares that make you jump once and immediately get over it. Instead, it takes the psychological horror route and keeps you on your toes for the entire playthrough. Using sanity as its claim to fame, you will watch the characters in the game slowly lose their grip on reality as they deal with the various monsters they didn’t even know existed. Some of the weird stuff will make you panic for a moment before you realize that this… isn’t… really… HAPPENING!

You begin the game as Alex Roivas. Her grandfather just passed away and now it is up to her to find the cause of his death because the police and detectives obviously couldn’t do it on their own. As she explores the obligatory creepy mansion, she finds a book bound with human skin and a few bones thrown in to add character… charming. The book reveals that these ancient God-like creatures are plotting to come into this universe and pretty much devour everything. Alex also comes across other pages of the book that tell of other unfortunate souls who have come across said Ancients, learned their plans, and met various forms of unfortunate ends. Good luck, Alex! 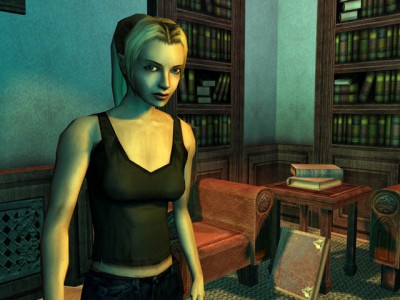 In addition to Alex, you play as a bunch of other characters from different times and places. Some of the characters you will play as include a meek looking monk who turns out to be a total badass with a mace, and a powdered wig wearing nobleman who wields two single shot pistols… because reloading those is fast and efficient. Each page of the book corresponds to a different character, and each character helps you get closer and closer to defeating the Ancients. The scariest part for me is that none of these characters asked for any of this! They were all just minding their own business, when all of a sudden BOOM! Zombies and monsters crazy! Most of them were just in the wrong place at the wrong time, and that is unsettling.

At least all of the characters are experts with whatever weapon they handle. For some characters it makes sense. I would expect a wartime journalist to be trained on how to shoot a rifle, but for some reason an average Joe architect is a decent swordsman and a crack shot with a crossbow. Come to think of it, every character with a long range weapon is the best marksman ever. They also don’t seem to care that they’re suddenly using magic runes that surround them to conjure spells that can heal their wounds and enchant their weapons. Nah, no big deal, I’ll just summon this giant hulking beast to take out this other giant hulking beast after I shoot three zombies between the eyes with my revolver; all in a day’s work.

I might get some hate for this, but if the early Resident Evils and the Silent Hills controlled like Eternal Darkness I probably would have played them more extensively. Eternal Darkness controls like most 3D games control. Forward means go forward, left means go left, and so on. The coolest thing is the targeting system. You hold R, different body parts on enemies will light up, and you can specify what you want to hit. My favorite thing is to lop a zombie’s head off and watch him swat at the air, or his friends like the dumb headless zombie he is. 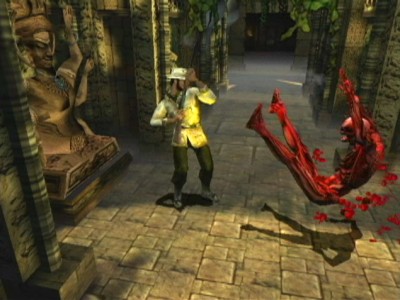 This is my BOOMSTICK!

The rest of the combat mechanics are also very interesting. Instead of just having one type of each enemy, Eternal Darkness has three, and each one is the spawn of one of the three Ancients. They have names, but they’re too much of a pain to type out so I’ll just call them red, green, and blue. The combat is based on a rock, paper, scissors system, so the best way to kill your enemies is to enchant your weapon with the dominant color magic. It doesn’t really matter for smalltime enemies like zombies, but when you see a giant blue monster, you’d best turn tail and enchant your weapon with some green or else he’ll probably tear you to pieces. These mechanics also apply to other spells like shield and magickal attack spells.

Throughout the game you will have to keep tabs on three different meters: health, magick, and sanity. The first two are pretty self explanatory, but the sanity bar is what really hits this game home. As your sanity bar depletes weird things start to happen. First you have your basic stuff like the camera tilting. As it drops some more you’ll hear people crying and the walls will start to bleed; pretty standard stuff. When it gets really low is when the interesting stuff starts to happen. I don’t want to spoil anything here in case you haven’t played it, but if you really want to find out just go to youtube and search “eternal darkness sanity effects.” Most of them are really creative and they will probably freak out out when you see them for the first time. 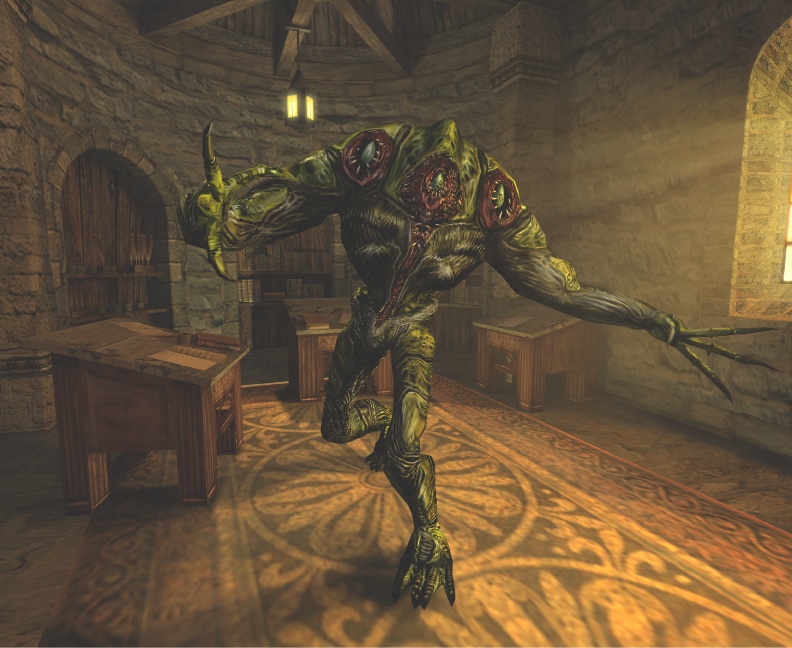 He just wants a hug. Although if I told you he didn’t bite I’d be lying. I mean come on, he has three heads.

I was surprised to see how well Eternal Darkness held up graphically. The character models can look a little wonky when there’s a close-up shot, but there is so much detail in the levels and enemies you will brush that off pretty quickly. Each stage is visited multiple times, and every time there is something different to see. The best example is the cathedral stage. It starts off as a small church, turns into a sprawling cathedral built around the old church, and finally converts to a military hospital when you visit it during World War I.

Eternal Darkness also sounds nice and creepy. The soundtrack fits each stage nicely, and from time to time you will get some inexplicable knocking or footsteps to keep you on your toes. The voice acting is also top notch, but when you have actors like Jennifer Hale (female Shepard, Samus, Bastila) and Cam Clarke (Liquid Snake), how can you go wrong?

Eternal Darkness is hands down one of my favorite horror games. It’s not the “jump off of your couch and scream like a little girl” scary, but it is very unnerving. You’re always on your toes and wondering what’s going to happen as your sanity bar depletes more and more, and you never know when the next strange thing is going to happen. The controls are solid, and the action based gameplay combined with some puzzle solving is a lot of fun, but most importantly, the diverse cast of characters and the level of detail in the stages will keep you immersed from beginning to end.