Let’s face it, back in 2008 Little Big Planet was one of Sony’s bombshells. It was the Big S trying to capitalize on some of that lost mascot love and we all ate it up. The gameplay inspired creativity on a massive scale, the characters were loveable, and the soundtrack was one that some of us still turn on to this day. The real question when it comes to Little Big Planet was whether or not we needed a sequel… ever. But we’ll touch on that a little later.

Little Big Planet Vita is the fourth entry in the LBP saga. It comes completely equipped with all the bells and whistles you’ve come to expect from the series. You’ll journey on a magical tale of imagination guided by (whether you like it or not) our favorite Englishman Stephen Fry. His voice work is great, but the tutorials are plodding and I found myself with a pretty bad taste in my mouth at the start. Luckily, once the story kicks in the game picks up substantially.

When I say “story”, I really mean story. Unlike previous LBP titles, LBPV actually adheres to some semblance of storytelling involving a puppeteer that has seeming gone rouge all over the land of Carnivalia. The villainess ventriloquist has unleashed a horde of wooden hallows to steal the worlds joy. The overall voice acting is great (besides that the LBP gibberish still makes a heavy appearance) and some of the characters you meet are charming as hell. I found myself wanting to hold on to every stage in the Tronesque, Jackpot City, and its super hero caretakers Sean Brawn.

The levels still retail the lilliputian styling from the previous titles. Everything is made of tossed aside objects like cardboard and cans. Despite the beautiful graphics, the landscapes don’t hold their usual allure. Maybe it’s the camera that is too zoomed out or the slight texture pop-in that occurs in some levels, but some of the overall whimsy is definitely gone. Regardless, the game still looks good on the Vita’s pristine screen. 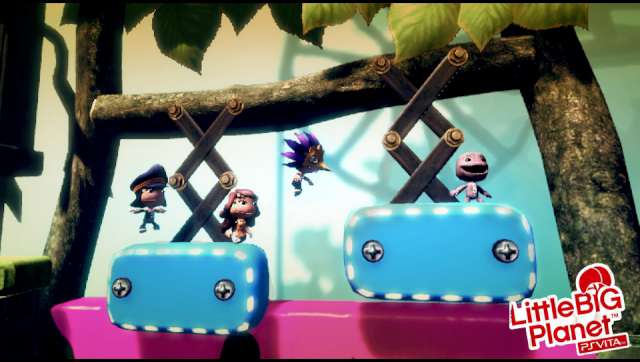 Blue blocks are touch sensitive and add a layer to the simple platforming.

The gameplay maintains its badge of quality as well. While the main campaign only takes about five hours to complete, it’s chock full of variety to keep you going. The Vita’s touch screens are both used in a way that doesn’t feel last minute or funneled in, and the gyroscopic functionality has some clever nods along the way. Still, I can’t help but feel these tricks are unneeded in anything but the minigames that are abundant and offer up some of the most fun in LBPV. They range from one-player wack-a-sack to a two-player/one device  air hockey table that me and my wife played for the better part of an hour.

Despite any complaints on the necessity, the game does utilize all its functions masterfully. They even got rid of some of the odd floatyness that I found irritating in previous iterations. We get to use the grab arms and grappling hook from LBP2, and both of these tools add a lot to the level structure. I even started pining for a Mega Man style game with the beauty and functionality of LBPV. Then again, I pine for a new Mega Man game during every successful 2D adventure.

Little Big Planet does lose a big draw, however. I found the original LBP to excel most in the Couch Co-Op department. There was just something supremely enjoyable about slapping your friends into fire pits and working cooperatively to complete the more daunting levels.  Now, LBPV features an able drop-in, drop-out multiplayer  that is only slightly hampered by some lag issues and just doesn’t bring the sheer funnitude that came with having your friends at arm’s reach. The game just can’t capture the magic the original once had. 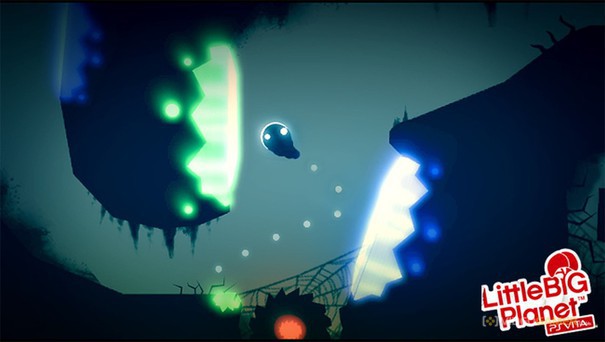 Not only does LBP Vita have minigames, it also has an arcade with unique games to play.

With all that being said, if you’re jumping into LBPV for the creation tools you’re in luck. The Vita offering boasts some of the best creation tools to date. The touch screen was made for this kind of experimentation and precise handling. It’s easy to get in and quickly start developing with a flick of a finger. I’m really excited to see what the community comes up with this time. Mostly, because in the end, LBPV success or failure will be in large part dependant on how much the community wants to develop.

Which brings us back to our original question. Do we need this game? While it is fun, it suffers heavily from the “I’ve already seen this” mentality. LBPV doesn’t offer up anything new besides a handful of multi-touch tricks. Even Media Molecule has moved on from the original series, instead handing the project to the smaller Double Eleven. But it speaks volumes when someone can come in and make something as true to its nature as they have, I just don’t know if a game based on the user’s desire to make and play content can continue to survive outside of a post-Minecraft world. What we were given with the original Little Big Planet was truly innovative and magical, what we get with Little Big Planet Vita is something overly familiar and, at times, rushed.

That is not to say LBPV is not worth playing. If you love the series you’ll find this entry to be at the top of the Sackboy pile. You’ll have a blast with the creation tools and probably find the story a hugely welcome addition despite seeming a tad hurried. The game is a much needed diversion on the Vita, but possibly not the groundbreaking accomplishment some of us were hoping for.

So did we need another sequel to Little Big Planet? Some might say that the game could never capture more  minds then the original. Maybe you are in the camp that can’t get enough of Sackboy and his costumes.  I think the answer lies somewhere in-between. If this is the game you’ve been waiting for, please step into your pod, if not, than you might find better value in something like Sound Shapes, which offers a lot of LBP’s features with extra innovation at far more digestible price.