But what the video game world has been in staggering short supply of, has been third person melee combat, particularly set in the medieval era. Those of us who consider ourselves to be recovering Mount & Blade addicts know that it can be done… and done correctly. But even Mount & Blade lacks the tiered unlock system and cutting edge graphics of most modern multiplayer games.

But, as of October 2012, we gamers looking for a medieval melee outlet can now find it in Fatshark and Paradox Interactive’s War of the Roses. Grab your sword, shield, horse, bow, arrows, or any other arms you can find, gamers, and head to the battlefields. It’s time to test your mettle. 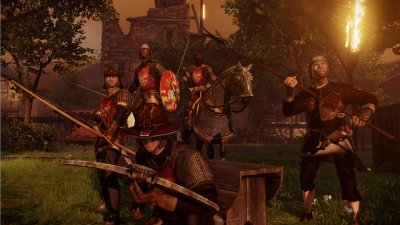 The maps are well balanced and beautiful.

Supporting up to 64 players per map, War of the Roses pits gamers head to head with one another in the struggle between the Lancasters and the Yorks. Players can choose from one of four pre-made classes like the knights, men-at-arms, long bowmen, and crossbowmen. Dealing damage, capturing objective points, healing teammates, or brutally executing your heathenous enemies fills your digital coffers with experience coins that can be used to unlock custom classes.

Once the custom classes are unlocked, players can then spend their currency on different weapons, armor, horses, perks and of course, skin and appearance customization  But the combat isn’t as simple as “point and click at enemy until death.” There is some real depth and panache to War of the Roses.

Gamers familiar with the Mount & Blade series will be somewhat at home with War of the Roses’ combat system. What may appear as a matter of “left mouse button to swing. Right mouse button to block,” is actually much more complex. Left mouse swings, but the direction of the swing is managed by the direction of the mouse. Force of the swing is determined by length of the wind-up, and the speed of the player. Of course, damage is determined by crushing vs. cutting damage type on an opening in the enemy’s armor or grazing off of their shield. Blocking is done in a similar fashion by pointing in the direction of the incoming attack.

By unlocking perks and new weapons, players can experiment with the different ways of dispatching their foes. Some weapons like two-handed axes and spears control completely differently than single handed swords; they only deal damage from the tip. Archery is an art of its own. Different bows, crossbows, and arrows deal various amounts of damage, all the while the player takes account for target speed, distance, strength of pull, and arrow drop.

For a budget-priced game, War of the Roses sports some impressive graphics. Each of the seven historically-inspired battlefields are not only well-balanced, but they’re beautifully decorated with well detailed farm houses, rivers, forests, castles, and detritus from previous battles. They also sport some beautiful weather effects like rain, fog, and “smoky hell from a city in flames.”

The weapons and armor are also gorgeous to behold. Each set of armor from light to heavy shows an incredible amount of detail within the weaving of the cloth and the chinks in the armor. It almost goes without saying that all of the weapons are given the same creator’s touch. 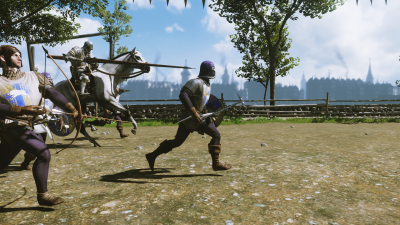 But as much as we love War of the Roses, it’s not without its ugly side. Because of the precise hit detection models, the learning curve is steeper than most online games and may be an outright turn off to new gamers. On the flip-side to that coin, almost all kills within the game are based on the skills honed within War of the Roses and not simply because someone had a better weapon. At launch, the servers didn’t seem to hold the sheer mass of players stressing the hull. Some game crashes came-mid match either due to server overload, or fluctuations with Steam. In time, we anticipate this issue to be hammered out. And we did encounter a few video errors along the way, but they were easily resolved with a simple game restart. Finally, as beautiful as the armor is, we would have loved to see more options in the medium and the heavy armor category.

In the end, we can easily say War of the Roses is worth buying if you’re looking for a melee combat multiplayer game. Certainly there are some balance issues and a few glitches that need to be stomped out, but those come with all multiplayer games. We loved the precision of the combat, the necessity to play as a team, the beauty of the environments and the weaponry, and there’s no other feeling like defeating another player in a real-time battlefield joust. On closing side note: we’re happy to see War of the Roses wasn’t simple cranked out into a free to play business model. The tiered unlock structure feels perfect the way it is.

If you think you’ve got what it takes to put down your sniper rifles and grenade launchers, and pick up a sword, shield, and lance, then we’ll gladly meet you face to face on the battlefield.