Developed by LudoCraft and powered by the Unity engine, AirBuccaneers is one of the most innovative multiplayer games we’ve played in a long time.

Selecting the side of either the Buccaneers or the Vikings, you and your teammates take to the skies in one of several airship models. The objective is incredibly simple, but it accounts for an endless supply of gaming exhilaration: shoot your enemies out of the sky using any means necessary. 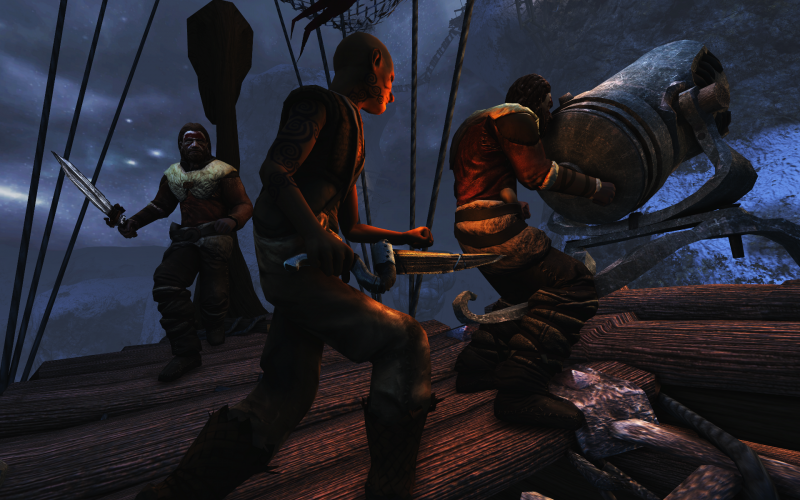 You can fly the solo kamikaze balloon, or the slightly larger airships with anywhere between one to four cannons. Or you can hop onto the slow, but deadly mobile base and fire your anti-aircraft guns high into the sky.

Or, if you’re brave enough, when your ship is close enough to the enemy, you can put your faith in your jumping abilities and attempt to board the enemy’s ship. Of course, if you miss, you’ll fall hundreds of feet to your certain death. If you succeed, it’s still an uphill battle trying to melee your enemies into submission. 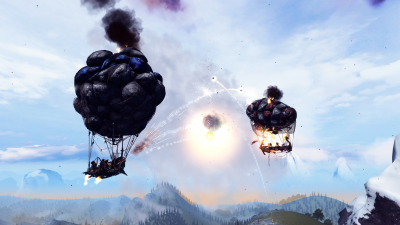 Like no other multiplayer game before it, teamwork is an absolute necessity. Someone needs to pilot the ship at all times or else it will begin to crash. Firing the cannons is a solo job, but if someone stands by to help reload, the process will go much quicker. There is no aiming reticle on screen, so the best shooters should always be standing by. Repairing the ship is practically a full-time job. It might be thankless, but it’s a necessity. And last, but certainly not least, are the extra hands on deck who can fire blocker shots into the sky to intercept incoming cannon and missile fire or place air mines out to devastate the enemy.

Player count may be limitless, but ship count is not. To hop aboard a ship that’s already in the sky, simply locate the nearest hang glider and get back into the fray. While you’re using the hang glider, you cannot manually pilot the craft, but you can do little things like aileron rolls to keep the 20 second journey from being too boring. What you can do, however, is select your destination from the available ships (both docked and in the sky) from their names on the right hand side of the screen.

AirBuccaneers features a tiered unlock system, but for the most part, the game is balanced right from the start. Gamer’s skills with piloting and shooting will almost always outweigh a few stat boosts. That doesn’t mean it isn’t fun watching your character grow from a scrub to a mighty warlord of the sky.

Stylistically, AirBuccaneers is a romantic masterpiece with its floating landscapes, rustic environment, and dingy makeshift air balloons. Graphically, it’s not up with the times, so don’t expect AAA effects to cause your video card to puke rainbows. Character models are outdated, and their animations aren’t the best. There are plenty of customization options available if you need to make some changes to have the game run smoothly on some older rigs.

The melee gameplay also needs some work. The swing mechanic is choppy and terribly underwhelming, leaving much to be desired in the hand to hand combat arena when boarding an enemy’s vessel. 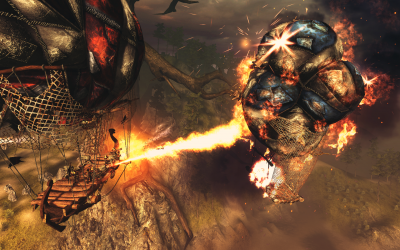 Sadly, there is no single player component to the game, which would go a long way for when the servers are on the empty side, or for when you just want to hone your shooting, jumping, piloting and boarding skills.

Aside from those complaints, the gameplay for AirBuccaneers is absolutely fantastic. It’s so good that we can easily forget about the game’s minor inequities. It is definitely a gamer party night game. The camaraderie created by piloting an airship together is like little else in gaming. There is a feeling of elation by winning a firefight by the skin of your teeth at an altitude of 700 feet, or making an all or nothing jump to board the other team’s ships.

We want more AirBuccaneers. We love its simplicity, its addictive qualities, its necessitated teamwork, and we love how, unlike many modern games, it takes a chance at making something new. It’s far from perfect, but it’s certainly captured our eye. There are few other games on the market like it.

AirBuccaneers gets a worth buying from us. With any luck, there will be a demo available shortly after it releases in early December. We will see you in the skies… just before we send you crashing to the Earth.